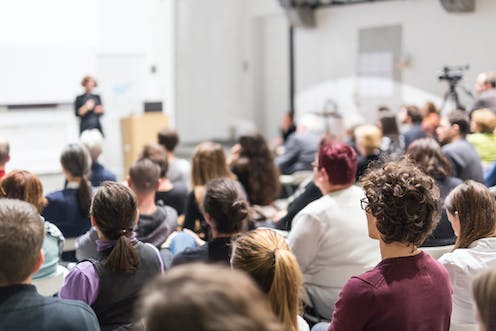 The National Tertiary Education Union this week struck an agreement with universities that no ongoing university staff member would be stood down involuntarily without pay. This deal is contingent on staff above a certain pay grade taking a cut of up to 15% of their salary.

It’s still uncertain how many universities will sign up to the deal – the Australian Catholic University has already rejected it.

Casual and contract academics are most vulnerable to imminent job losses. By mid-2018, an estimated 94,500 people were employed at Australian universities on a casual basis, primarily in teaching-only roles.

The number of precariously employed academics has been estimated at 70% of teaching staff in some universities. At the University of Wollongong, for instance, around 75% of staff are in insecure work – a figure that includes both teaching and administrative workers.

And yet in March, the university had failed to ensure wage support for casual staff needing to self-isolate for any reason.

In April, one-third of casuals at the University of NSW had reported they’d lost work. This reportedly cost them an average A$626 a week, and 42% were working unpaid hours.

Casual academics are not eligible for the government’s JobKeeper payments due to rules that require more than 12 months continuous employment with an organisation that has lost between 30-50% of its revenue – effectively ruling universities out. Casual academics are often on short-term contracts, such as a semester-by-semester basis.

Under the NTEU agreement, displaced casual and fixed-term contract staff will be prioritised for new work. This approach leaves many staff in a position of increased precarity. The likelihood of new work emerging over the next few months is low, given the downturn in international student enrolments and uncertainties around conducting fieldwork research given social distancing policies.

This highly skilled yet vulnerable group need greater support from our government.

Some estimates place revenue losses at Australian universities at around A$19 billion over the next three years due to the COVID-19 pandemic. The university sector estimates this puts more than 21,000 jobs at risk over coming months, and countless more in the future.

Some universities, such as the University of Tasmania, have had to reduce the number of courses offered in 2021 to recoup funding. And universities have had to scale back spending, for example, on major construction works.

This week, Vice Chancellor of La Trobe University, John Dewar, said revenues could be A$150 milloon under budget this year and up to A$200 million next year.

In April, La Trobe and RMIT university had let go of hundreds of casual “non-essential” staff. Western Sydney University warned staff in April it would cut casual workloads as it faced mounting financial shortfalls over the next three years.

Despite these realities, both tenured and untenured academic staff are being asked to do more in teaching and research to support the country in the face of this pandemic. They are doing this with fewer resources.

Even before the NTEU agreement, many universities responded with clear policies and support in response to COVID-19. For example, executive staff at some universities – such as La Trobe and the The University of Wollongong – took a 20% pay cut, and froze any non-essential travel.

Many universities, such as Deakin, are providing paid leave for staff with caring responsibilities and paid isolation leave for those exposed to coronavirus. And others, like ANU and ACU, have extended benefits to their casual and contract staff. These include honouring existing contracts, paying sessional tutors despite reductions in teaching hours and paying casual staff to attend online professional development.

Read more: Dependent and vulnerable: the experiences of academics on casual and insecure contracts

All workers need transparency around expectations and pay. But this is particularly important for casual staff, whose immediate and long-term work prospects are under threat despite having often spent years in universities building expertise. Although casual academics are on temporary contracts, some have been working for universities longer than their colleagues on continuing contracts.

In the United States a statement of solidarity started by 70 prominent academics academics has so far received more than 2,000 signatures. The signatories have refused to work with any university that does not support its staff.

Some might argue such declarations are performative. But our research interviews with precariously employed academics highlight how support from ongoing academic staff is critical to their experiences in academia. This includes their mental health, job prospects and future career paths.

Casual staff members already experience isolation and anxiety. Missing out on benefits such as special leave provisions extended to tenured staff while working from home may exacerbate this.

Breaks in an academic career or a lack of visibility – which could result from working from home, not holding a current contract or a lack of recent publications – can irrevocably damage future job prospects for any academic.

The government has pledged to support employees from many other industries impacted by COVID, through policies like JobKeeper. As our third largest national export, higher education is crucial for building new knowledge and preparing our future workforce.

While the NTEU framework offers a starting point, further government funding is required to provide appropriate security to those who work on casual or fixed-term contracts in higher education.

Recognition of their work and clarity about prospects and pay can make a massive difference to the lives and careers of our non-tenured colleagues.