Improved demand including in the retail sector and the re-opening of schools will be the largest contributors to an estimated $9.4 billion monthly rise in GDP from the planned three-stage lifting of COVID restrictions, according to Treasury estimates.

The first stage of easing, which the states are now implementing at varying paces, will increase monthly GDP by an estimated $3.1 billion. Of this, $0.97 billion is estimated to come from stronger demand and $0.73 billion from reopening schools.

Easing of first stage restrictions is also set to see jobs increase by 252,500, with the second and third stage easing boosting employment by 275,100 and 323,200 respectively. The government has said it aims for a “COVID-safe economy” by July.

Treasurer Josh Frydenberg’s economic update to parliament on Tuesday will document the huge downturn caused by the virus, as well as providing estimates for the road back.

But he will not give a forecast for the massive deficit the October budget will contain. Only a few months ago Frydenberg expected to deliver a surplus in a budget that would have been brought down this Tuesday.

As people start to hit the shops, the largest single increase in monthly GDP from the three-stage easing is $2.9 billion expected to come from improved demand.

This is followed by $2.18 billion from schools opening, which allows more parents to return to work. The big number is one reason why Scott Morrison has been so strong on the need for schools to return to normal.

Victorian premier Daniel Andrews, the most conservative of the premiers on schools as well as other restrictions, is due to provide an update on Victoria schools reopening.

The coming weeks will be a delicate balance between the health and economic issues as restrictions are eased.

There is mounting impatience from some parts of business to move things faster, especially in Victoria.

But Deputy chief medical officer Paul Kelly told The Conversation on Monday “there is a very large risk of a second wave”.

Kelly said if a second wave developed there was the option of reintroducing some restrictions, though that could be “in a very measured and localised way” to deal with outbreaks, even if they were large.

Scott Morrison has made it clear he doesn’t want restrictions to have to be reimposed.

According to the government’s figures if NSW, instead of lifting restrictions, had to go back to those in place before the May 8 national cabinet meeting, it would cost its economy about $1.4 billion per week.

Frydenberg will say the government debt incurred to get the country through the recovery “will take many years to repay”, while indicating there has to be a limit to government support. “Rebuilding consumer and business confidence will be key as the nation’s finances can only be sustained by a strong and growing market-led economy. Australians know there is no money tree. What we borrow today, we must pay back in the future,” he says in an extract of his statement issued ahead of delivery.

The emerging debate, as both sides of politics look to the other side of the crisis, will be over how big a role the government needs to play directly in the recovery. Asked on Monday whether, in light of the success in containing the virus, the Treasury’s scheduled review into JobKeeper would assess whether to truncate or alter the program before its September expiry, Morrison said: “All of this is very premature. We are six weeks into a six-month program. And the impact of the virus, how it will impact on Australia in the months ahead with a reopening economy, is very much a work in progress. That’s why we’ve put this six-month lifeline in place.” Morrison also said: “How that program can be adjusted to better support over that period, or if there are sectors that come under greater strain over a longer period of time, these are all things that the government is fully aware of. But we are not going to get ahead of ourselves”.

Frydenberg will highlight the “sobering” data of the economic plummet. “In March, business and consumer confidence saw the largest declines on record. The ASX lost a third of its value in just four weeks. "In April, surveys showed that job ads halved and activity in the construction, manufacturing and services sector had their largest ever month falls. New motor vehicle sales fell by 48%. Their largest ever fall. House sales by 40%.” As part of the government’s response, “over $25 billion of support has already flowed to households and businesses in recent weeks, with more than $30 billion to flow next month”. Treasury estimates that easing restrictions on cafes, restaurants, pubs and clubs will boost monthly GDP by $1.75 billion over the three steps. But the first stage boost of $0.5 billion reflects the slowness of the easing in this sector. Domestic and international travel contributes only $0.72 billion increase in monthly GDP over the three stages, reflecting the closure of the international border for the foreseeable future as well as limitations on domestic travel and the depressed economy. With restrictions eased, NSW would contribute $3.1 billion increase in monthly GDP over the three steps and Victoria $2.2 billion. For the first stage, the figures for NSW and Victoria are $1 billion and $717 million respectively. Indicative split of coronavirus cost of $4B per week to the economy [based on restrictions in place before May 8] 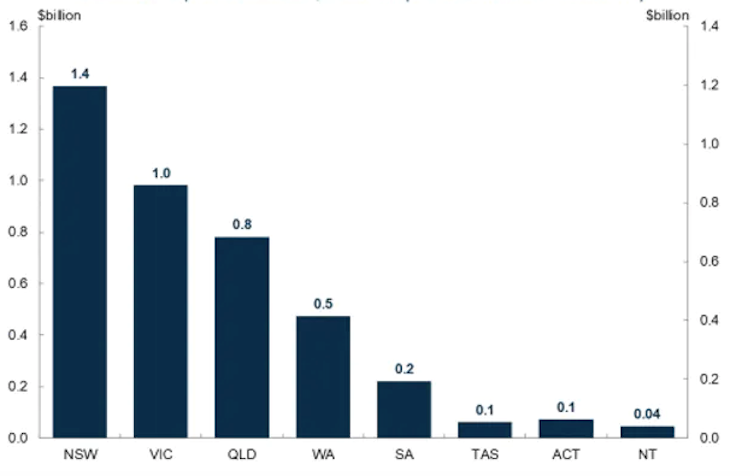 How the Buddha became a Christian saint

Did ancient Americans settle in Polynesia? The evidence doesn't stack up