It’s been almost three years since thousands of Australian sheep died during a voyage from Australia to the Middle East. My group’s new research provides insight into the heat stress faced by sheep exported in recent years and casts further doubt on the industry’s future.

We found sheep experienced heat stress on more than half of voyages to the hottest port in the Middle East, Doha, over three summers from 2016 to 2018.

This is the first time the extent of heat stress in live sheep exports from Australia has been quantified, and the findings do not bode well. A federal government ban on exports during the Northern Hemisphere summer is already hurting the industry. And COVID-19 looks likely to affect the annual Hajj pilgrimage and Eid al-Adha religious holiday, when our sheep meat is in high demand. 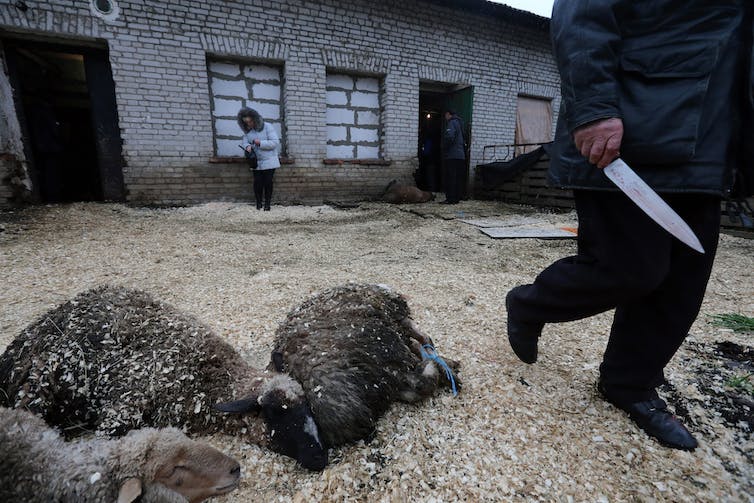 Sheep slaughter is at the centre of the Islamic Eid al-Adha festival. ANATOLY MALTSEV/EPA

Australia to the Middle East is one of the world’s longest sea transport routes of live sheep for slaughter, usually taking about 20 days.

The welfare risk to sheep from heat stress is highest on voyages departing Australia in our winter, and arriving in the Persian Gulf in the Northern Hemisphere summer.

In April 2018, whistleblowers released video footage filmed the previous year showing shocking live export conditions on the Awassi Express ship. More than 2,400 sheep died on the voyage from Fremantle to the Middle East.

The footage triggered public outrage. As part of its response, the federal agriculture department established a committee, of which I was a member, to assess the heat risk facing sheep exports to the Middle East.

The committee recommended measures to ensure sheep experienced heat stress on fewer than 2% of voyages. Subsequent research by my group would reveal just how far the industry is from that target.

The federal government granted us access to temperature and mortality data from 14 voyages from Australia to the Middle East in May to December, between 2016 and 2018.

We wanted to know at what temperatures the welfare of the sheep began to be affected by heat stress.

To determine this, we analysed so-called “wet bulb temperatures” on the sheep decks. This measures not just air temperature but water vapour, which affects the levels of heat stress actually experienced at a particular temperature.

Wet bulb temperatures typically increased from 20℃ to 30℃ during the 14 voyages in the Northern Hemisphere summer. Ten out of 14 ships stopped at Doha in Qatar, the hottest of the four Gulf ports. There, daily maximum wet bulb temperatures from July to September exceed 27.5℃ half the time, at which point heat stress in sheep increases.

The wet bulb temperatures at Doha exceeded 32.2℃ 2% of the time, at which point sheep deaths are more common. 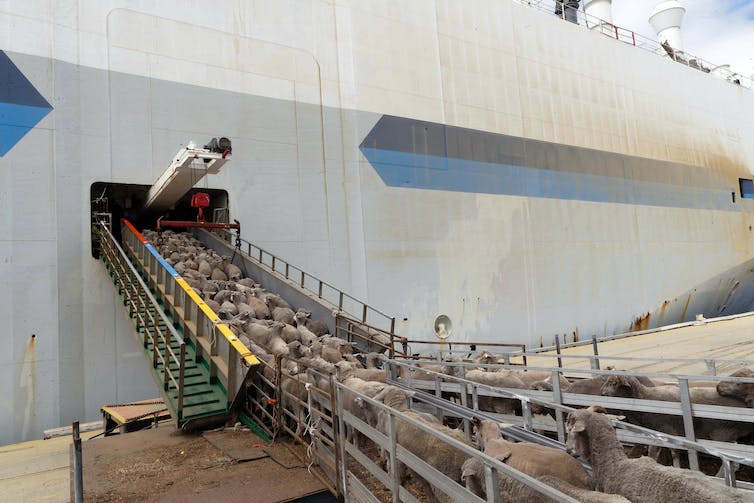 The sea journey from Australia to the Middle East is one of the world’s longest. Trevor Collens/AAP

Ships docking at Doha sit in the sun for about a day and a half while some sheep are unloaded, exposing those left on board to high temperatures.

The ban is not enough

The federal government recently banned sheep exports to the Middle East between June 1 and September 14 this year, due to heat stress risks. Shipments to Doha are banned from May 22 until September 22.

The government has argued that a longer ban would have too great an impact on the industry. But our results show mortality increases during voyages from September to November, compared with May. This suggests more sheep will die as a result of the shorter ban.

The government introduced other measures this year to try to improve sheep welfare on ships.

First, it will require temperature data to be recorded at two sheep pens per deck. However my group has shown this does not produce representative results.

Second, sheep can be unloaded at no more than two ports. But our results suggest that it is not the number of ports that influenced sheep deaths, but whether sheep were kept in hot conditions on board at Doha.

The COVID-19 pandemic has struck a further blow to sheep welfare. The federal government requires that animal welfare audits are conducted at holding facilities in the destination countries. But quarantine requirements have made these checks difficult.

It’s also worth remembering that heat stress is not the only challenge sheep face en route to the Middle East. They usually have very little space and likely get stressed by ship motion.

Australia has recently been unable to meet the Middle East’s demand for sheep meat – a problem the industry blames partly on the export ban. Middle East buyers are increasingly turning to the horn of Africa, Europe and Asia.

Compounding this, COVID-19 looks set to force the cancellation of the annual Hajj pilgrimage to Mecca in Saudi Arabia culminating in Eid al-Adha – a sheep-eating festival usually celebrated by millions of Muslims.

The double whammy will particularly hurt Western Australia, which in 2019 handled 97% of sheep leaving Australian ports.

If the festival is not cancelled, Australian sheep may be sent early to be stockpiled alive in the Middle East, to avoid the export ban. This would leave them exposed to the high temperatures the Australian government has sought to protect them from on ships. 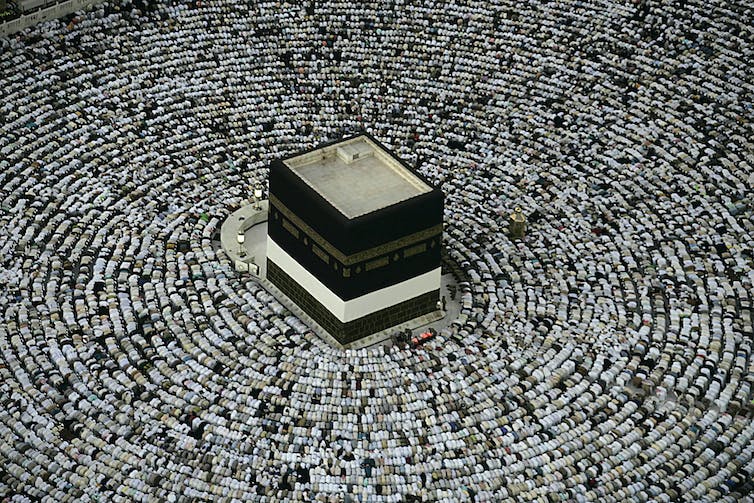 The annual Hajj pilgrimage looks set to be cancelled due to COVID-19. Ali Jarekji/Reuters

Some Western Australian sheep farmers have seen the writing on the wall. In the short term, some are turning to alternative livestock, such as prime lamb or beef cattle for domestic consumption or export as carcasses. This has the added benefit of keeping processing jobs in Australia.

In the long term, farmers would do well to look at the rising popularity of vegetarianism and veganism, and the threat to conventional meat production posed by “clean” meat grown in labs.

Some sheep grazing has already been replaced by cropping, and this is likely to increase in future.

There is no quick fix to the problems facing live sheep exports from Australia. The sooner we shift our economic reliance to more humane alternatives, the better.

Read more: Can meat exports be made humane? Here are three key strategies