A species of mammal that lived in what is now Madagascar when dinosaurs roamed the island has finally been described today in Nature.

The work is based on a complete skeleton of the animal found more than two decades ago.

The cat-sized animal, known as Adalatherium hui or “crazy beast”, has features not found in today’s mammals, so it could be one of evolution’s abandoned experiments in developing new life.

The origin of mammals

Almost all the mammals today fall into two groups: the placentals (which includes dogs, mice, whales, cows and us) and marsupials (kangaroos, the koala and the Tasmanian devil). While very distinctive today, both these groups were mostly small and mouse-like in the time of the dinosaurs.

Read more: Curious Kids: how do we know if a dinosaur skeleton is from a child dinosaur or an adult dinosaur?

During this time, several other types of mammals roamed the Earth. Some were the ancestors of modern mammals, but many others are long extinct. We see glimpses into these little known and extinct mammal groups but they are a mystery to us.

Since the 1980s strange fossil teeth have been found in places such as South America, India and Madagascar. These modern landmasses were once joined as part of the southern supercontinent known as Gondwana. The strange fossil mammals found there are named the Gondwanatheria.

When all that is known of an animal is its teeth, it is a challenge to distinguish what exactly it is and how it relates to the fossil remains of better understood groups of early mammals.

We needed a skeleton

The breakthrough came when a team of palaeontologists (led by Dave Krause) discovered the first intact skeleton during excavations in Madagascar in 1999. 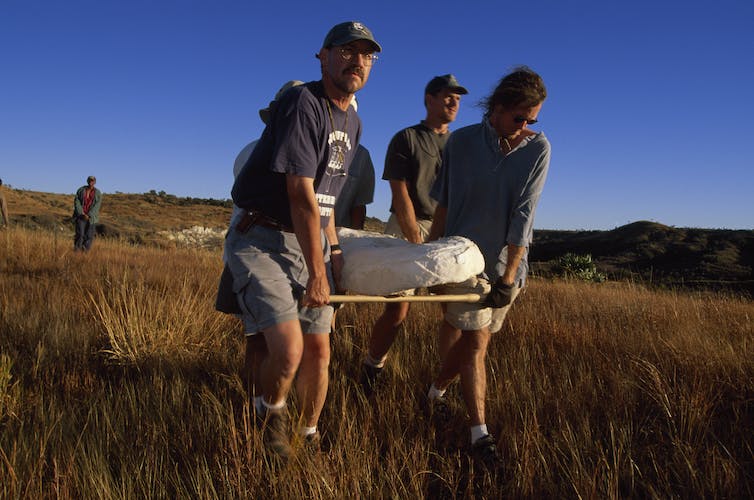 This remarkable find, dated to near the end of the Cretaceous period (66 million years ago), showed gondwanatherians were different from all other mammals known.

There were so many mysteries surrounding how this animal looked that it remained a challenge to relate this species back to other mammals. As a result, the process of scientific description was long and complicated.

We gave the full skeleton the name Adalatherium hui. It’s a combination of a Malagasy word “Adàla” meaning “crazy” and Greek word “therium” for “beast”, in reference to the many strange features found in this unusual mammal.

The skeleton was encased in a block of sandstone, which was delicately sculpted away to reveal the bones in almost life position. 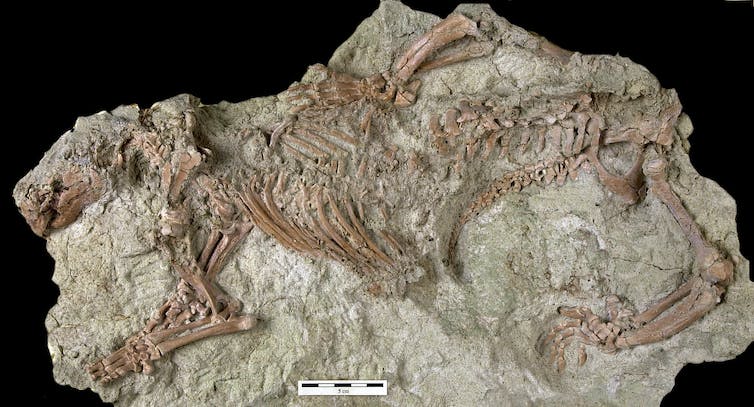 Because it was so fragile, we relied on X-ray microCT scanning through the rock to digitally map the bones and teeth. Some of the fossil parts were shattered, the back teeth and the braincase in particular.

Over hundreds of hours, the minute fragments of teeth were painstakingly put back together in a 3D jigsaw puzzle in the computer.

Each component could then be 3D-printed at real size, or enlarged to see the features better. 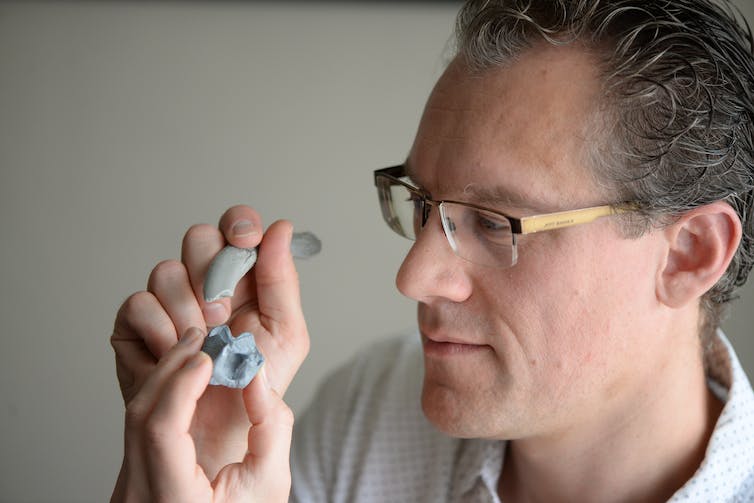 A most bizarre mammal

There is much about this animal that was so unusual. Features of the skull (the largest number of small holes for nerves and blood vessels in any mammal) and ear bones (small ridges inside the cochlea) have never been found in other mammals.

Among the most bizarre features in Adalatherium are its teeth. Not only did this species have mouse-like ever-growing front teeth, but the rear teeth are completely unlike those of any other mammal that has ever been described.

The ridges and bumps on teeth are generally very consistent within each group of mammals, so they can act like a fingerprint to tell us who they are. Adalatherium has a new fingerprint, with a diamond-shaped ridge running around the outside of each tooth that interlocks with its opposing tooth in the other jaw. 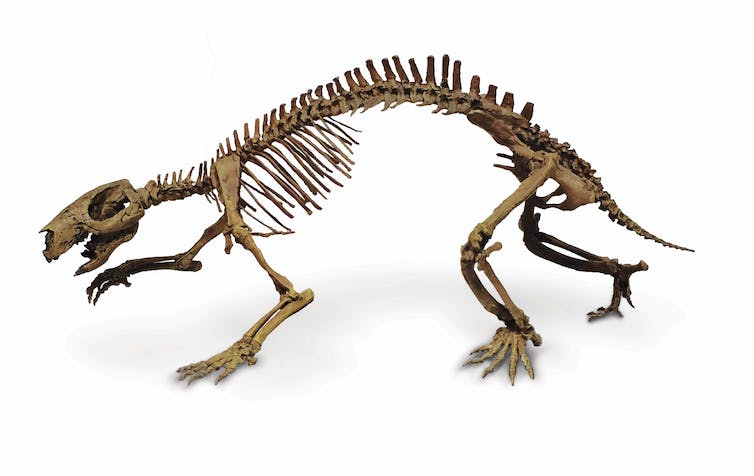 From examining its unusually bowed leg bones, strong back muscles and big claws on the back feet, we suggest Adalatherium was a robust animal, perhaps capable of digging for food or shelter. Its unusual teeth may indicate a plant diet.

The dramatic differences between Adalatherium and all other mammals known, past and present, shows there is more than one way to be a mammal.

The Gondwanatherians therefore represent an experiment in evolution, one of a number of early mammal groups where different body shapes and ways of life were still being tinkered with, before most died out, leaving the familiar mammals of today.

One reason this group became so different likely relates back to where it was living: on an island.

Adalatherium lived in what is now Madagascar, which at that time had already been set adrift, separated from what became mainland Africa and the other major landmasses for tens of millions of years.

Read more: How smart were our ancestors? Turns out the answer isn't in brain size, but blood flow

Strange things can happen on islands. Very large animals evolve to become smaller, perhaps because there is not enough food on the island to feed a population of giants.

Conversely, very small animals sometimes evolve to become larger, especially if there are no large predators on the island with them. Such was the case with the gorilla-sized lemurs that lived on Madagascar only a few thousand years ago, before humans arrived.

This is known as the island effect and may explain why Adalatherium is one of the largest mammals of its era. It was around the size of a domestic cat at about 3.1kg, possibly due to its freedom from competitors on its island home.