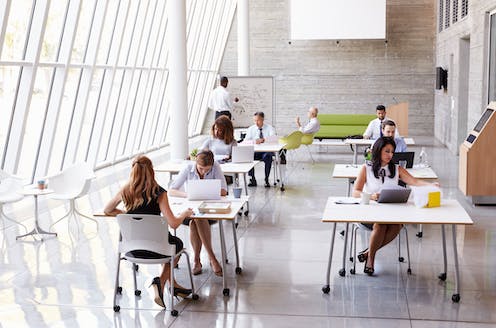 As lockdowns are relaxed around the world and people return to their workplaces, the next challenge will be adapting open office spaces to the new normal of strict personal hygiene and physical distancing.

While the merits and disadvantages of open plan and flexible workspaces have long been debated, the risk they posed of...

As lockdowns are relaxed around the world and people return to their workplaces, the next challenge will be adapting open office spaces to the new normal of strict personal hygiene and physical distancing.

While the merits and disadvantages of open plan and flexible workspaces have long been debated, the risk they posed of allowing dangerous, highly contagious viruses to spread was rarely (if ever) considered.

But co-working spaces are characterised by shared areas and amenities with surfaces that need constant cleaning. Droplets from a single sneeze can travel over 7 metres, and surfaces within pods or booths, designed for privacy, could remain hazardous for days.

Even in countries such as Australia and New Zealand where efforts to “flatten the curve” have been successful and which have relatively easily controlled borders, it’s fair to ask whether communal workspaces might be a thing of the past.

Perhaps – if vigilant measures are in place – some countries can continue to embrace collaborative, flexible, activity-based workplace designs and the cost savings they represent. But this is unlikely to be the case in general in the coming years. Even if some organisations can operate with minimal risk there will be an expectation they provide virus-free workplaces should there be future outbreaks.

Worldwide, there will undoubtedly be fewer people in the office – now workers have tried working from home, they may find they like it. And organisations may have little choice but to limit the numbers of workers on-site. Staggered shifts, enforced flexitime, and 24/7 operations may become the norm, along with working remotely. 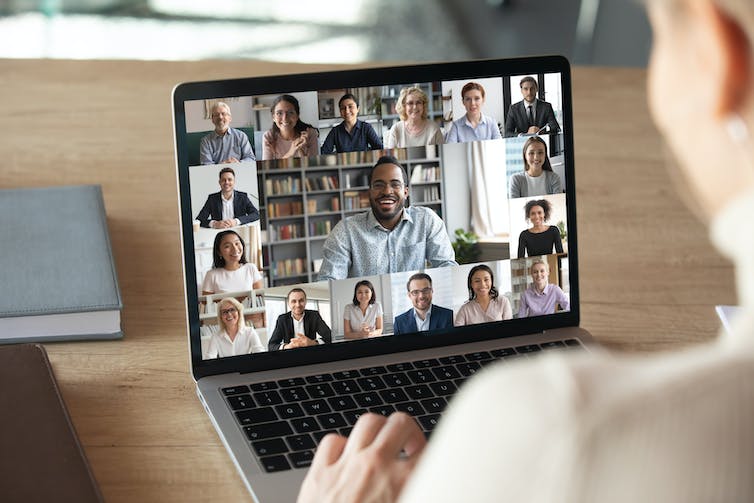 Video meetings, even within the same workplace, could become the new normal. from www.shutterstock.com

The open plan model has been criticised for everything from lowered productivity, less interpersonal interaction, antisocial behaviour, reduced well-being, too much distraction, a lack of privacy, and making workers feel exposed and monitored.

But it has also been shown to improve cooperation and communication. Whether these innovative spaces are within a large organisation or are communal workspaces where start-ups, freelancers, and contractors can sit together (such as GridAKL in Auckland or The Commons in Sydney), their popularity is undeniable. The sense of community and the ability to share knowledge and ideas are key attractions of co-working.

Riding the shared/flexi-space wave have been companies such as WeWork – popularising communal tables within co-working hubs and providing “pods” for private conversations. But there is now little doubt WeWork will be an early casualty of COVID-19. Already in financial trouble before the pandemic, WeWork will cut more than 1,000 jobs this month.

But what about the thousands of organisations that retooled their densely populated work environments to encourage flexibility, activity-based work, and movement within and between spaces?

James Muir, CEO of sustainability start-up Crunch and Flourish has no doubt using co-working offices in central Auckland has been a positive: “We benefited from the great community at GridAKL,” he says. “And before long we were collaborating with other start-ups on marketing and design as well as getting great advice from more experienced entrepreneurs.” 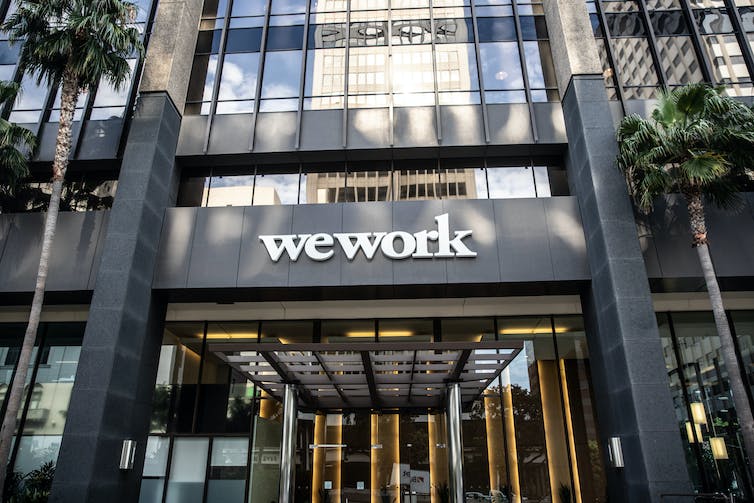 Shared workspace company WeWork is expected to be another casualty of COVID-19. from www.shutterstock.com

Those fortuitous conversations and information exchanges will inevitably become rarer as we avoid the risk of interpersonal contact - and they are almost impossible to mimic online. Personal interaction (even within the office) will be replaced with the already familiar virtual video meeting - or even, as TIME magazine reports, holograms and avatars.

Read more: How women’s life-long experiences of being judged by their appearance affect how they feel in open-plan offices

However, communication is more challenging when conducted remotely. We are more persuasive in person, particularly if we know the person. Being on a video call is more draining than a face-to-face chat because workers must concentrate harder to process non-verbal cues such as tone of voice and body language. Anxiety about technology is another barrier, and some find lack of eye contact in virtual meetings (mimicked by staring at the “dot” of your own camera) disquieting.

New norms of hand sanitising, cleaning equipment and wearing masks will emerge. Handshaking or friendly pecks on the cheek may soon be things of the past, as will family photos and mementos on desks, if they prove too difficult to sanitise.

Aside from behaviours, policies, and attitudes, the physical office will need to change. Already, a company in the Netherlands has coined the term the “6 feet office”, aiming to redesign workspaces to help workers maintain social distancing at work.

We may even see the return of the high-walled cubicle, and the introduction of wide corridors and one-way foot traffic, already found in some hospitals. Activity-based work and hot-desks (which oblige people to move throughout the day) could be replaced by assigned desk arrangements where workers sit back to back.

In the meantime, will James Muir resume running Crunch and Flourish from his co-working office after the pandemic? “Yes,” he says, “once the risk of any new cases is under control.”