Stephen Wolfram is a cult figure in programming and mathematics. He is the brains behind Wolfram Alpha, a website that tries to answer questions by using algorithms to sift through a massive database of information. He is also responsible for Mathematica, a computer system used by scientists the world over.

Last week, Wolfram launched a new venture: the Wolfram Physics Project, an ambitious attempt to develop a new physics of our universe. The new physics, he declares, is computational. The guiding idea is that everything can be boiled down to the application of simple rules to fundamental building blocks.

What’s the point of the ‘new physics’?

Why do we need such a theory? After all, we already have two extraordinarily successful physical theories. These are general relativity – a theory of gravity and the large-scale structure of the universe – and quantum mechanics – a theory of the basic constituents of matter, sub-atomic particles, and their interactions. Haven’t we got physics licked?

Not quite. While we have an excellent theory of how gravity works for large objects, such as stars and planets and even people, we don’t understand gravity at extremely high energies or for extremely small things.

The current best approach we have to quantum gravity is string theory. This theory has been a work in progress for 50 years or so, and while it has achieved some success there is a growing dissatisfaction with it as an approach.

How is Wolfram’s approach different?

Wolfram is attempting to provide an alternative to string theory. He does so via a branch of mathematics called graph theory, which studies groups of points or nodes connected by lines or edges. 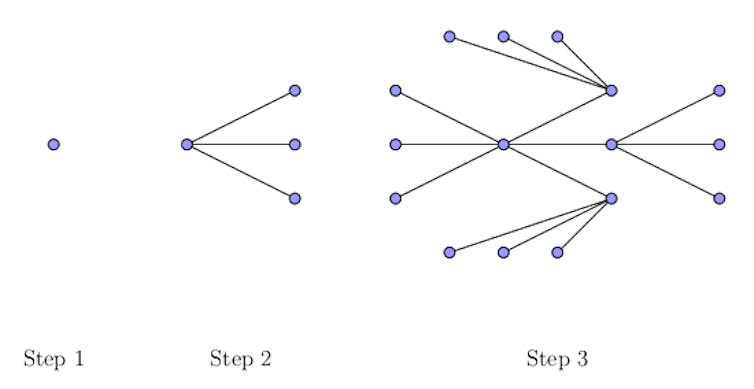 Key to his suggestion is that a suitably complicated graph looks like a geometry. For instance, imagine a cube and a graph that resembles it.

In the same way that a collection of points and lines can approximate a solid cube, Wolfram argues that space itself may be a mesh that knits together a series of nodes. Samuel Baron, Author provided

Wolfram argues that extremely complex graphs resemble surfaces and volumes: add enough nodes and connect them with enough lines and you form a kind of mesh. He maintains that space itself can be thought of as a mesh that knits together a series of nodes in this fashion.

What does this have to do with physics?

Stephen Wolfram believes that space itself may be a complex mesh of points connected together by means of a simple rule that is iterated many times. Wolfram Physics Project

So is it time to get excited?

While Wolfram’s project is promising, it does contain more than a hint of hubris. Wolfram is going up against the Einsteins and Hawkings of the world, and he’s doing it without a life spent publishing in physics journals. (He did publish several physics papers as a teenage prodigy, but that was 40 years ago, as well as a book A New Kind of Science, which is the spiritual predecessor of the Wolfram Physics Project.)

Moreover, his approach is not wholly original. It is similar to two existing approaches to quantum gravity: causal set theory and loop quantum gravity, neither of which get much of a mention in Wolfram’s grand designs.

Read more: Einstein to Weinstein: the lone genius is an exception to the rule

Nonetheless, the project is notable for three reasons. First, Wolfram has a broad audience and he will do a lot to popularise the approach that he advocates. Proponents of loop quantum gravity in particular lament the predominance of string theory within the physics community. Wolfram may help to underwrite a paradigm shift in physics.

Second, Wolfram provides a very careful overview of the project from the basic principles of graph theory up to general relativity. This will make it easier for individuals to get up to speed with the general approach and potentially make contributions of their own.

Third, the project is “open source”, inviting contributions from citizen scientists. If nothing else, this gives us all something to do at the moment – in between baking sourdough and playing Animal Crossing, that is.