During a national emergency we discover how well, or poorly, a country is governed. But New Zealand’s success so far in working towards eliminating COVID-19 isn’t due just to leadership from the top. It’s been a collective success, involving most “ordinary” Kiwis and unity across political divides.

As New Zealand awaits a decision on easing its strict level 4 lockdown, it’s worth looking at what’s worked here so far, what hasn’t – and how much national unity might survive in the months ahead.

New Zealand Prime Minister Jacinda Ardern’s crisis leadership skills have attracted the most international attention. And understandably so – it took courage and leadership to heed scientific advice and go for elimination of the virus, which is not an option for many countries. Ardern has also shown a strong command of the issues, along with humane, firm and consistent messaging.

But Ardern has not been the only leader in New Zealand’s COVID-19 response. Instead, what’s been striking is how well the nation’s broader political system – the public service, health experts, the opposition, and the vast majority of New Zealand’s nearly 5 million people – have all played a role.

Ministers and public officials have worked well as a team when fronting up to journalists, and been willing to address difficult questions.

Behind each of those leaders, from the prime minister down, there has an army of often unseen public servants and health professionals working around the clock to support a nation-wide effort.

Of course, certain problems were not well anticipated. For example, the repatriation and quarantining of Kiwis returning home could have been better, while initially there was lax monitoring at the border and inconsistently applied policing guidelines.

Admittedly, no one could have fully prepared for this pandemic. But the government and the public sector will have lessons to learn for next time. Taiwan was better prepared than many nations for COVID-19 due to its past experience with SARS in 2003.

Read more: Trust in government is high in NZ, but will it last until the country's elections later in the year?

Personal leadership from the ground up

New Zealanders right across the country also deserve recognition for having cooperated for weeks with severe, if not dictatorial, restrictions on their liberties and customs, even affecting the ways we mourn.

For many Kiwis, there’s been painful loss of income, social isolation, and radical changes in sport and recreation. But we have each played a part in successfully breaking the chains of COVID-19 transmission.

The community has got in behind an elimination strategy that (so far) is working. The daily numbers of new reported cases peaked at 89 on April 5 and have declined since. The number of active cases (all reported cases minus recoveries) is declining. Health system overload has been averted. 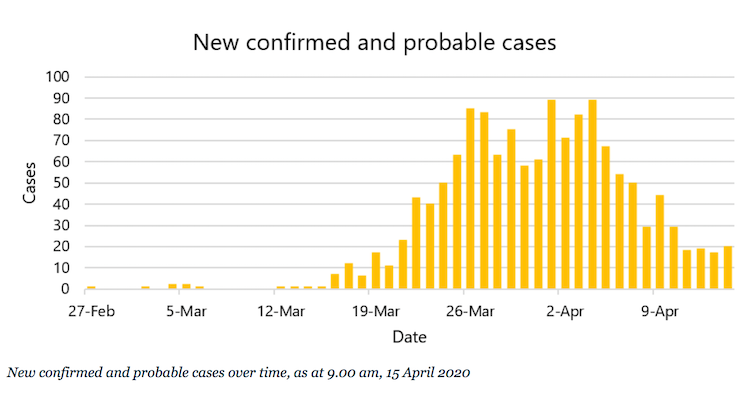 New Zealand’s running tally of new and probably cases, as of 9am, April 15, 2020. NZ Ministry of Health

There have, of course, been rule-breakers, some of whom even Ardern has called “idiots”.

But, fearful of either infecting others or being infected, most people have been supportive of the government’s efforts. An international poll found 88% of New Zealanders surveyed “trust the government to make the right decision around the response to COVID-19” – significantly higher than in other countries including the UK, US, Canada and Japan.

Read more: The psychology of lockdown suggests sticking to rules gets harder the longer it continues

On the big questions […] there’s no National or Labour, or Green or ACT or New Zealand First; just New Zealanders. – Opposition leader Simon Bridges’ speech to parliament about the declaration of a national state of emergency, March 25, 2020.

When rapid action was needed to pass emergency legislation in March this year, including a massive stimulus package, New Zealand’s parliament acted quickly, and with unusual unity across party lines.

Since then, while parliament has been adjourned, a special select committee chaired by National Party leader Simon Bridges, has been running public online hearings, with opposition members in the majority.

They have asked ministers and officials critical but constructive questions about the crisis response, holding the government and officials to account, as they should. Following a fractious exchange at the start, there has been relatively little political point-scoring.

Similarly, not long after the prime minister’s announcement that she, her ministers and public sector leaders would take a 20% pay cut for the next six months, the opposition leader said he’d be doing the same.

Read more: Three reasons why Jacinda Ardern's coronavirus response has been a masterclass in crisis leadership

Returning to politics as usual beyond level 4 lockdown

I’d love to say the present politics of unity will last, but it would be naive to expect that.

Even today, the opposition leader moved to take the initiative from the government, pushing for more businesses to re-open sooner rather than later. Bridges’ call pre-empted finance minister Grant Robertson’s speech later in the day about opening more “safe” businesses.

The date for the next election is still set for 19 September. While Labour is riding high at the moment, this is likely to be temporary. After the Christchurch terrorist attack in March last year, Labour surged ahead of National in the polls, but soon fell back to second place.

By the time this immediate health crisis is over and the economic consequences start to bite, we are bound to go back to politics as usual. National could, for instance, attack the government over the economic fallout, and Labour would then have to defend its record.

And political fallout from national crises can really damage an incumbent government, if things go badly.

Stay in touch with The Conversation’s coverage from New Zealand experts by signing up for our weekly newsletter – delivered to you each Wednesday.