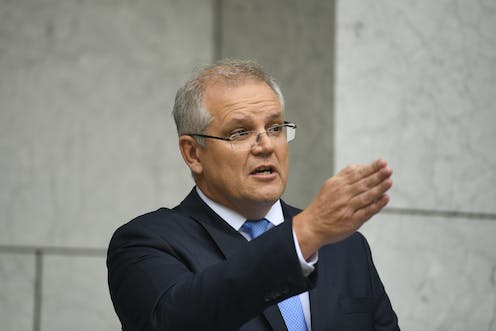 This week’s Newspoll, conducted April 1-3 from a sample of 1,508 people, showed a huge boost in Prime Minister Scott Morrison’s approval rating based on his leadership thus far in the coronavirus crisis.

Anthony Albanese also improved his net approval by nine points to +9. Morrison led Albanese as better PM by 53-29%, another large improvement from the last Newspoll, which was a closer 42-38%.

Analyst Kevin Bonham says these are the biggest poll-to-poll jumps for a PM in Newspoll history on both net approval and better PM. His tweet shows the largest net approval rises for PMs, and when they occurred.

The Newspoll also gave the Coalition a 51-49% lead over Labor in the two-party preferred question, a two-point gain for the Coalition since the last Newspoll three weeks ago.

Major crises tend to produce a “rally round the flag” effect for incumbents, though it doesn’t always last.

An example of a major crisis that produced an initial rally-round-the-flag effect, but nothing else, is the Queensland floods in December 2010 to January 2011, which affected over three-quarters of the state.

From October to December 2010, the Labor state government was trailing the opposition LNP by a landslide 59-41% margin. Based on Premier Anna Bligh’s handling of the floods, Labor surged ahead by 52-48% in the January to March 2011 polling, but then fell back immediately to a 60-40% deficit in April to June 2011.

Labor never recovered and was reduced to just seven of 89 seats at the March 2012 state election.

Read more: Thanks to coronavirus, Scott Morrison will become a significant prime minister

There are currently far fewer coronavirus cases and deaths in Australia than in European countries and the US. If the crisis is resolved relatively painlessly in Australia, I believe Morrison’s ratings will stay high during the crisis, but then drop back after it ends.

In other Newspoll questions, 84% of respondents were worried and 14% confident about the economic impact of coronavirus (76-20% previously). On the preparedness of the health system, 57% were worried, compared to 41% confident.

An overwhelming majority (86%) supported the JobKeeper scheme. While 64% thought the $1,500-per-fortnight payment for qualifying workers was about right, 16% thought it was too much and 14% not enough.

Some 67% were worried about catching the virus, 38% about higher government debt, 36% about losing their jobs and 35% about their superannuation balance.

In the FiveThirtyEight polling aggregate, US President Donald Trump’s current ratings across all polls are 45.8% approve, 50.0% disapprove (net -4.2%).

In polls of registered or likely voters, Trump’s ratings are 45.6% approve, 50.9% disapprove (net -5.3%). Trump’s net approval has improved five to six points in the last three weeks and is at its highest since early in his term.

Despite the rise in Trump’s approval, the RealClearPolitics average of national polls gave virtually certain Democratic presidential nominee Joe Biden a 5.9% lead over Trump in the November 2020 election, down modestly from 8.5% three weeks ago.

A recent Fox News national poll gave Trump a 51-48% disapproval rating. However, 53% thought a quicker response from the federal government could have slowed the spread of coronavirus, while 34% said it was so contagious nothing could stop it spreading.

Read more: Our politicians are not fit to oversee the coronavirus response. It's time they got out of the way

Despite the higher rating for Trump, the same poll gave Biden a 49-40% lead in the presidential election.

Trump’s gains so far are dwarfed by then US President George W. Bush’s gains in approval of over 30 points after the terrorist attacks of September 11 2001.

Other current leaders and governing parties have had far bigger bounces in their ratings than Trump, including Morrison.

In Britain, two recent polls gave the Conservatives 54%, up from the mid-to-high 40s. In Germany, the conservative Union parties are in the mid-30s, up from the mid-20s before the crisis. A recent French poll gave President Emmanuel Macron a -8 net approval, up 26 points.

Even in the US, Trump’s bounce is far less than the bounce for New York’s Democratic Governor Andrew Cuomo. Cuomo’s net favourable rating improved from -6 to +48 in a New York Siena College poll. New York has the most coronavirus cases in the US so far.

If the coronavirus crisis is resolved relatively quickly, people will likely be more focused on other factors by the November presidential election. In that case, how much damage the economy takes and whether it is clearly recovering are likely to be the most important factors.

The more likely scenario is that coronavirus will damage the US both economically and in health terms for a long time. The US already has far more cases than any other country. I do not believe Trump’s ratings gains will be sustained if the US falls into a massive health and economic crisis.

In March, the US unemployment rate rose 0.9% to 4.4%. The survey period was in mid-March, before the massive late-March losses.

In the household survey, employment was down almost 3 million people, compared to a mere 701,000 in the headline establishment survey. While average hourly wages rose 11 cents, this probably reflects the shedding of lower-paying jobs.As average weekly working hours fell, average weekly wages dropped almost US$2 from February.