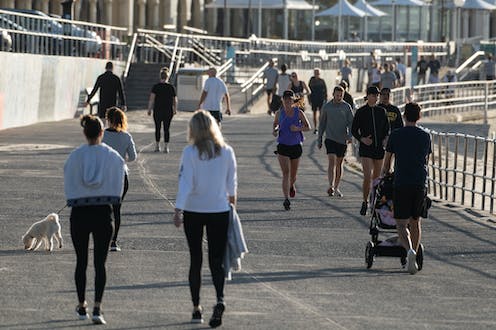 To the young and healthy, our new “social distancing” rules may look unnecessarily draconian. If you’re in a demographic that’s low risk for coronavirus, it may be difficult to see the benefit of taking personal responsibility for social distancing. You might think, “I’m unlikely to get badly sick, so why bother?”

There are two broad ways the coronavirus crisis might play out. Both make it wrong for you not to bother.

Ignoring the guidelines makes you culpable

First, suppose our health care system is overwhelmed and you didn’t follow the guidelines. You’ll be a culpable contributor to people’s deaths.

Obviously you have. But philosophers will argue over the exact nature of your wrongdoing. Perhaps you “helped” to cause the deaths. Or it’s wrong to be part of a group that does wrong. Or there was some chance you were the tipping point for the boulder’s fall.

Perhaps you were “complicit” in the deaths, in the sense that your actions implicitly condoned them. Some philosophers argue this is what’s wrong with buying clothes made in sweatshops: by doing so, you condone global labour injustice.

Whatever the best philosophical analysis, we can all agree you’ve done wrong.

Replace the boulder with an overwhelmed health care system. Replace pushing the boulder with ignoring the social distancing guidelines. If you do nothing, you’re a culpable contributor to the spread of coronavirus, and hence more people dying.

Being a free-rider is equally wrong

There’s a second way coronavirus might play out. Maybe our health care system will do okay. To achieve this, we’ll need to flatten the epidemic’s curve, with the help of large-scale social distancing.

To picture this, we need to change the analogy. Suppose a boulder is already rolling towards the cliff edge, with the same crowd at the bottom.

You sit on the sidelines drinking a martini, while others attempt to stop the boulder. You can’t be sure if enough people are acting. Yet you just sit there and watch. Again, you’ve done wrong - even if they succeed.

One way to understand your wrongdoing in this second example is that you’re a free-rider: a scab, a sponge, someone who takes advantage of other people’s willingness to help. The free-rider is like someone who relies on people’s general trustworthiness - and the fact that people, therefore, generally trust others - to get away with telling lies.

In Immanuel Kant’s terms, the free-rider’s actions aren’t “universalizable”: if everyone was a free-rider, then trust would break down.

Kant’s basic thought was that before you act, you should ask yourself: what if everyone acted in this way? His belief was we should do only what we can expect others to do. If you fail to do that, by making an exception of yourself, then you demonstrate a fundamental disrespect for others.

This is the same in both the clifftop example and the real world. If everyone drank martinis, the boulder would fall. If everyone ignores our current guidelines, thousands of Australians could die.

Why collective action is so important

So, what is the best way forward? The boulder example suggests we should look at the overall outcome caused by the group, and our part in that. We need to be collectively rational, not just individually rational.

What does this mean? In liberal societies like Australia, we’re used to being rational on an individual level. We’re used to asking: what do I want, and how can I get it? Right now, this way of thinking is leading to panic buying in supermarkets, crowds on beaches and an exponentially growing rate of coronavirus infections.

The collective approach asks: what should we aim for, what pattern of actions will allow us to get there and what’s my individual role in that pattern?

In some places, such as China, the collective pattern can be imposed from the top down, by the government. In liberal societies like Australia, we more often rely on bottom-up change, via individuals choosing to do the “right thing”.

In the clifftop example, our collective goal should be stopping the boulder. As members of the clifftop group, we must each do what we can to stop the fall.

Read more: Nice to meet you, now back off! How to socially distance without seeming rude

In the real world, our collective goal should be to slowing the spread of the virus and flattening the epidemic curve. As Australians, we each must practice social distancing and observe the rules on gatherings of more than two people and self-quarantining.

We are accustomed to being collectively rational in other facets of life. We regularly put aside our self-interest for the good of our family, for instance. And we resent sports stars who put their own individual glory ahead of their team’s victory.

We now need to scale up that thinking to the level of our whole society. After all, nations are unified entities that can set goals for themselves and act to achieve those goals. But governments rely on us, the members of these states, to get them there.

Thinking collectively means embracing the values of solidarity, community and cooperation. These values have been only briefly implicit in Prime Minister Scott Morrison’s paternalistic reprimands, but other world leaders have emphasised them.

In the long-term, these values might bring us a more caring society: a society built on recognition of our human vulnerability, our inevitable dependence on one another and our responsibility to look after one another.

For now, those values mean staying home whenever you can.