The World Health Organisation has praised Modi’s handling of the COVID-19 crisis. The lockdown may also be crucial in preventing the spread of the virus.

But the recent move to prevent community transmission is having an enormous impact on those most in need in India – the hundreds of millions who live in poverty. 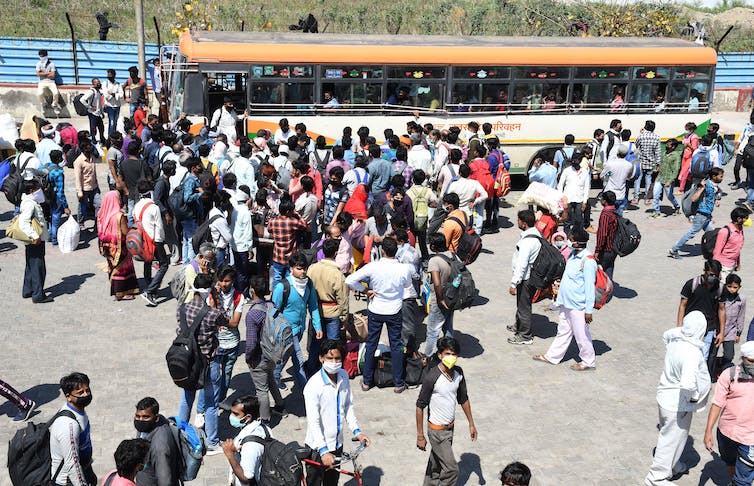 The Uttar Pradesh government has arranged for 1,000 buses for migrant labourers as hundreds of them started walking to their villages on foot. Stringer/EPA

Over 90% of India’s 500 million non-agricultural workers are employed in the informal economy, for example, as construction workers, food vendors, rickshaw drivers or in sales. After the lockdown was announced, many people found their industries or operations had closed, or new rules about travel and social distancing prevented them from working.

One such individual, Anand, belongs to an adivasi, or tribal, migrant community living in a slum colony in the outskirts of Nagpur, a city in Maharashtra, central India. We met Anand (all names in the story are pseudonyms) in the context of research we have been undertaking on social transformation in contemporary India.

Read more: Why Modi's India has become a dangerous place for Muslims

Since the start of the lockdown, Anand has not been allowed to work in his usual job, cutting trees. Like most others in the informal economy, he relies on his daily wages and has no employment rights, paid leave, insurance or savings.

With no regular access to clean water or even soap, Anand is concerned about COVID-19. He his even more worried about hunger.

I’m so afraid. How long will this last for? If we can’t go to work, how will we get money? And if we don’t have money, how will we eat?

Two days later, Modi established a Citizen Assistance and Relief in Emergency Situations Fund (PM CARES fund) to solicit donations from companies and individuals to help those in need.

Several state governments, including Maharashtra, are engaged in similar measures, offering cash transfers and free food to the poor.

But the amounts of money and food provided through government initiatives are insufficient and sometimes delivered slowly. Many migrants are also not formally registered to receive support through existing schemes. Instead, they have to rely on NGOs or find some way to “make do” themselves.

Anand has been relying in recent days on a local NGO, which delivers a small bag of food to feed his family of six. Commenting on the tiny parcels that arrive, he said: “It feels like a joke.”

There are millions in similar situations across India. Yogesh is a rickshaw driver living on the outskirts of Meerut, a city in Uttar Pradesh, not far from New Delhi. He told us that when his work dries up, “even my shit stops.”

The Uttar Pradesh government has promised one-off cash transfers to its residents, but these amount to just 1,000 rupees, or roughly A$21.50, which is hardly enough to feed a family for five days.

Anand and Yogesh still had some form of shelter, but since the lockdown a large number of India’s enormous migrant worker population – many of whom receive housing through their employer - have become homeless.

In Delhi, night shelters are grossly overcrowded and thousands of people are stranded at bus and train stations. Many have begun walking home, often journeys of hundreds of kilometres, only to be forced to return to the cities. 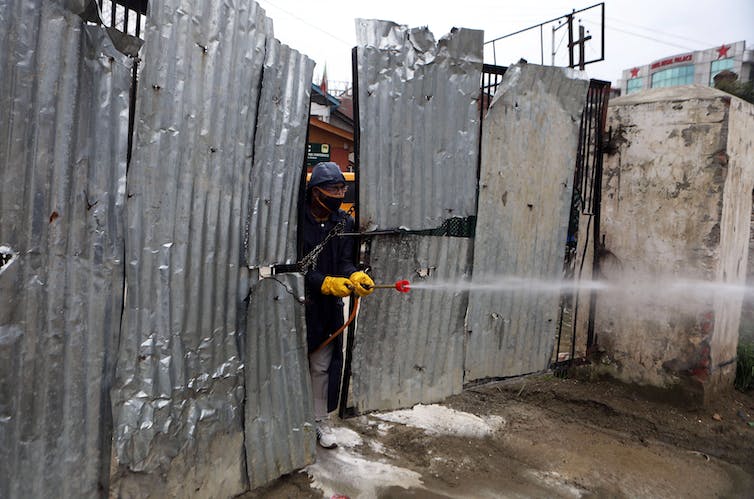 Workers spray disinfectant inside a building compound in Srinagar, the capital of Kashmir. FAROOQ KHAN/EPA

These struggles are not confined to urban areas. Vandita, who we also know well through our research, lives in a remote village in the Himalayas. As a subsistence farmer, she has some stores of food and even some savings. But the lockdown scares her.

Last year’s crop stores are running dangerously low, and the spring harvest in the mountains is still some months away. Social distancing measures restrict effective agricultural work, particularly the cooperative labour groups so essential to survival in these harsh environments and for the social lives of rural women.

Disrupted supply chains is also making it increasingly difficult to find food to buy at the markets.

The sense of fear and uncertainty is already affecting people’s mental health. Vandita speaks about growing rates of depression as isolation measures disrupt the collective work and cohesion on which the social and economic life of the village depends.

If migrant labourers return from the cities, Vandita predicts her village will be “in crisis”. Like other villagers, she lacks access to decent health care. Reaching the nearest major hospital would be a journey of several days. If there was an outbreak of coronavirus in the village, it would have rapid and tragic consequences.

India has so far avoided the worst of the COVID-19 pandemic, though there has been a spike of cases in recent days. The short-term security of people like Anand, Yohesh and Vandita will depend on the capacity of government to expand its distribution of support.

For many of India’s poor, time is running out.