While we don’t know if fish populations declined from the 2016 bleaching disaster, one 2018 study did show the types of fish species on some coral reefs changed. Our study dug deeper into fish DNA.

I was part of an international team of scientists that, for the first time, tracked wild populations of five species of coral reef fish before, during, and after the 2016 marine heatwave.

From a scientific perspective, the results are fascinating and world-first. 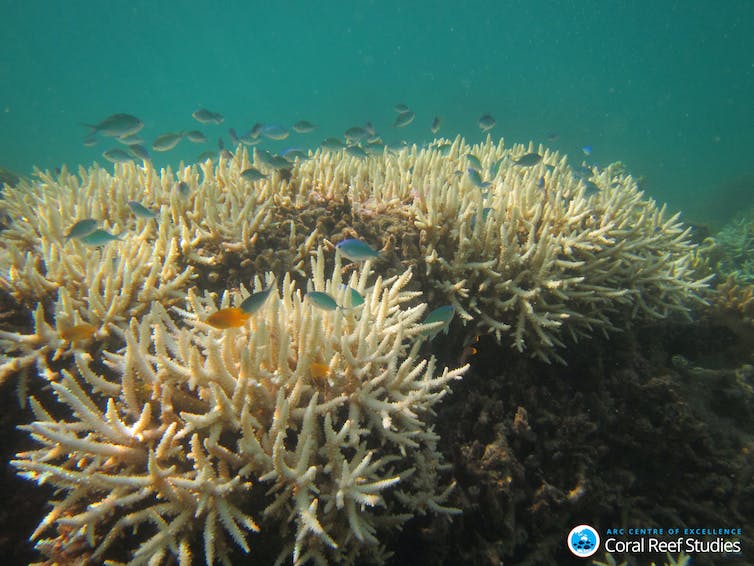 We used gene expression as a tool to survey how well fish can handle hotter waters. Gene expression is the process where a gene is read by cell machinery and creates a product such as a protein, resulting in a physical trait.

We know many tropical coral reef fish are already living at temperatures close to their upper limits. Our findings can help predict which of these species will be most at risk from repeated heatwaves.

But from a personal perspective, I still feel nauseous thinking about what the reef looked like during this project. I’ll probably feel this way for a long time.

We were prepared. Back then we didn’t know the reef was about to bleach and lead to widespread ecological devastation. But we did anticipate that 2016 would be an El Niño year. This is a natural climate cycle that would mean warm summer waters in early 2016 would stick around longer than usual.

Given this foresight, we took some quick liver biopsies from several coral reef fish species at our field site in December 2015, just in case. 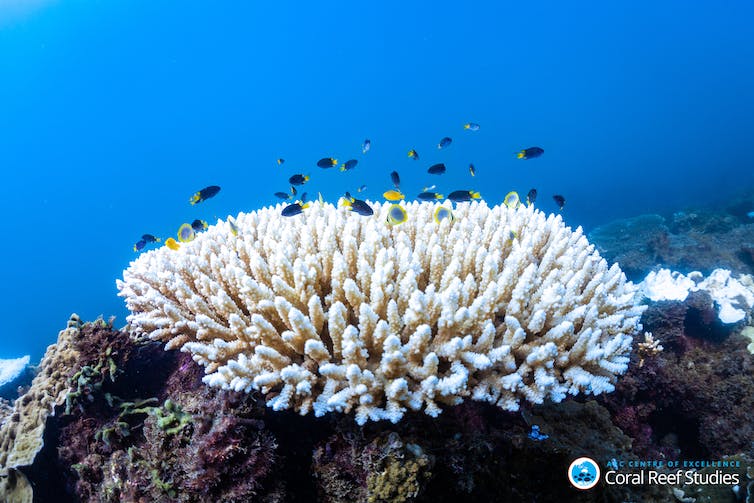 A couple months later, we were literally in hot water

In February 2016, my colleague and I were based on Lizard Island in the northern part of the Great Barrier Reef working on another project.

The low tides had shifted to the afternoon hours. We were collecting fish in the shallow lagoon off the research station, and our dive computers read that the water temperature was 33°C.

Read more: The Great Barrier Reef is in trouble. There are a whopping 45 reasons why

We looked at each other. These are the temperatures we use to simulate climate change in our laboratory studies for the year 2050 or 2100, but they’re happening now.

Over the following week, we watched corals turn fluorescent and then bone-white.

The water was murky with slime from the corals’ immune responses and because they were slowly exuding their symbiotic zooxanthellae – the algae that provides corals with food and the vibrant colours we know and love when we think about a coral reef. The reef was literally dying before our eyes. 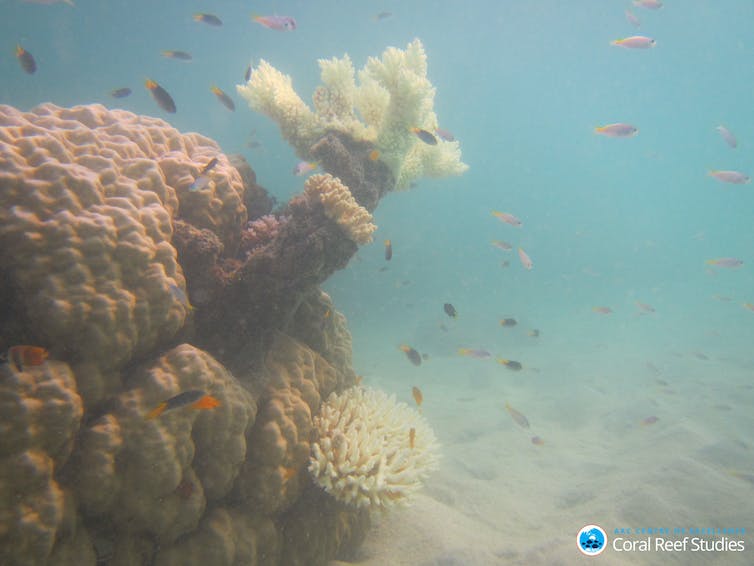 A third of the corals on the Great Barrier Reef perished after the 2016 heatwave. Jodie Rummer, Author provided

Traits for dealing with heatwaves

We sampled fish during four time periods around this devastating event: before, at the start, during, and after.

Some genes are always “switched on”, regardless of environmental conditions. Other genes switch on or off as needed, depending on the environment.

If we found these fish couldn’t regulate their gene expression in response to temperature stress, then the functions – such as metabolism, respiration, and immune function – also cannot change as needed. Over time, this could compromise survival.

The plasticity (a bit like flexibility) of these functions, or phenotypes, is what buffers an organism from environmental change. And right now, this may be the only hope for maintaining the health of coral reef ecosystems in the face of repeated heatwave events.

So, what were the fish doing?

We looked at expression patterns of thousands of genes. We found the same genes responded differently between species. In other words, some fish struggled more than others to cope with marine heatwaves. 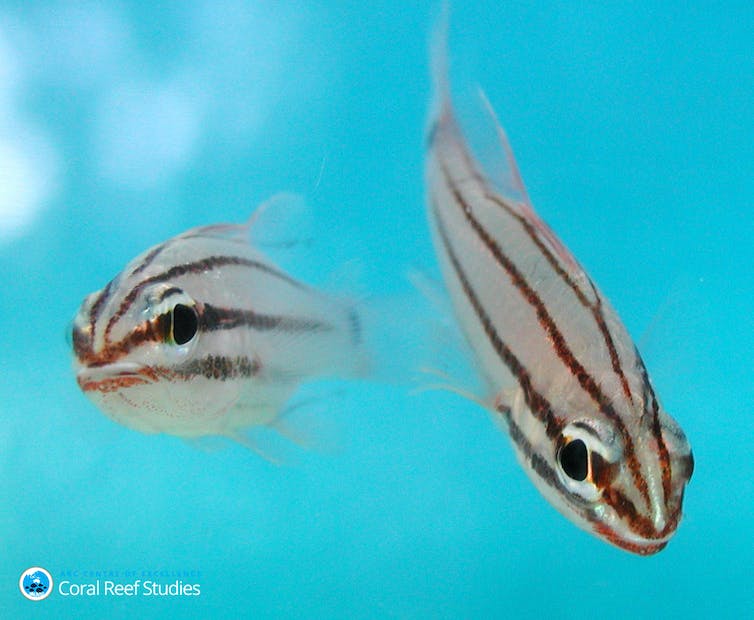 The species that coped the least was a nocturnal cardinalfish species (Cheilodipterus quinquelineatus). We found it had the lowest number of differentially expressed genes (genes that can switch on or off to handle different stressors), even when facing the substantial change in conditions from the hottest to the coolest months.

In contrast, the spiny damselfish (Acanthochromis polyacanthus) responded to the warmer conditions with changes in the expression of thousands of genes, suggesting it was making the most changes to cope with the heatwave conditions.

What can these data tell us?

Our findings not only have implications for specific fish species, but for the whole ecosystem. So policymakers and the fishing industry should screen more species to predict which will be sensitive and which will tolerate warming waters and heatwaves. This is not a “one size fits all” situation. 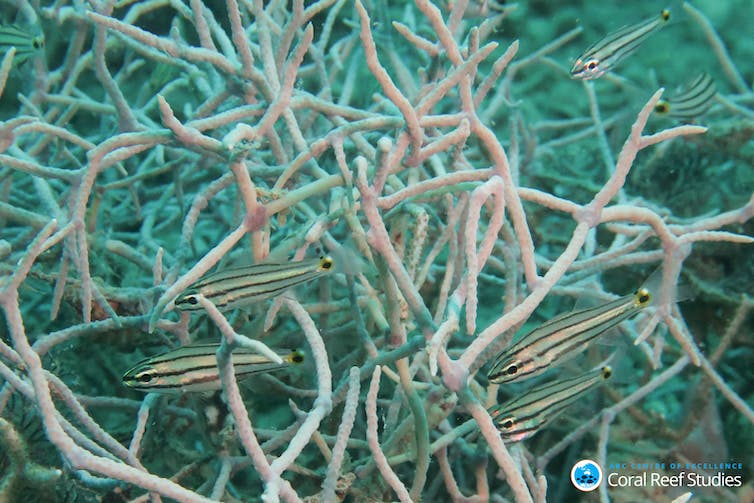 One of the species that showed the least amount of change under warming was Cheilodipterus quinquelineatus. Moises Antonio Bernal de Leon, Author provided

Fish have been on the planet for more than 400 million years. Over time , they may adapt to rising temperatures or migrate to cooler waters.

But, the three recent mass bleaching events is unprecedented in human history, and fish won’t have time to adapt.

My drive to protect the oceans began when I was a child. Now it’s my career. Despite the progress my colleagues and I have made, my nauseous feelings remain, knowing our science alone may not be enough to save the reef.