Chief Medical Officer Brendan Murphy was still shaking hands on Sunday morning. But when that afternoon Scott Morrison announced the latest coronavirus measures, including compulsory self-isolation for overseas arrivals, the Prime Minister said he and other cabinet members wouldn’t be shaking hands anymore.

Only on Friday Morrison had been thrusting his hand at a notably wary Gladys Berejiklian. 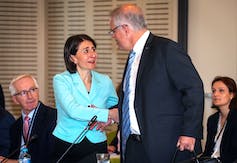 David Gray/AAP Confusing signals. On the other hand, this isn’t just a fast-moving situation, but one in which even experts have differing takes (the advice from the federal-state medical officers panel may be unanimous but it’s understood there are disputes in their deliberations), and politicians struggle with responses, even as they follow the medical recommendations. For example, the NSW government has appeared more forward-leaning than the feds. While members of the public understandably seek certainty, on some fronts there will be no absolutes, just scales of assessment, probability, and risk. That’s not to say the federal government should not have been clearer at times, and its mass media advertising campaign, which started at the weekend, was inexplicably slow to materialise. The Australian tally of cases approached 300 and the death toll rose to five at the weekend. Only history will show definitely whether Murphy and the government are right in their claims Australia is keeping “ahead of the curve”, or the critics vindicated in arguing it is behind it. Morrison in particular has wanted to put the most optimistic gloss on things, not least because he hoped to minimise economic disruption. Despite the constant flow of news conferences over recent weeks, the government avoided dwelling on how bad things could get. Read more: Morrison's coronavirus package is a good start, but he'll probably have to spend more By Sunday Morrison’s tone had changed. He had a graph to illustrate the need to flatten the curve of infection to enable the health system (notably the intensive care facilities) to cope. “Slowing the spread, you free up the beds,” he said. 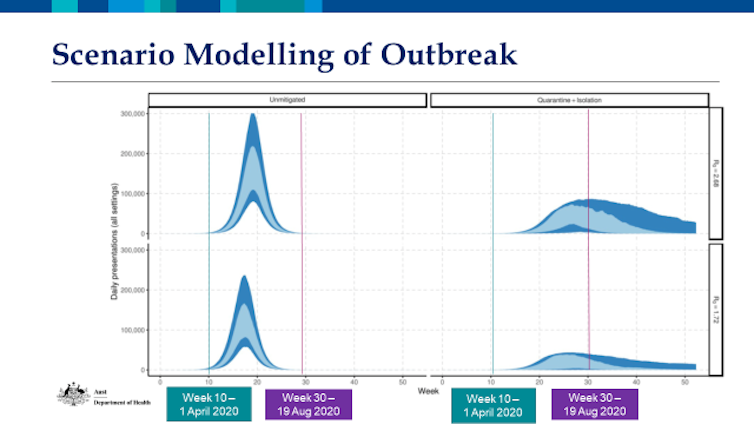 Federal Department of Health Stark and unfolding realities were starting to prevail - though not entirely - over the prime ministerial desire to keep the lines upbeat. And compulsion and the law were replacing choice and advice, in the measures Morrison outlined following Sunday’s meetings of cabinet’s national security committee and the new “national cabinet” of federal and state leaders (and after Morrison spoke at the weekend with Britain’s Boris Johnson and New Zealand’s Jacinda Ardern). Like New Zealand, Australia will now insist all arrivals self-isolate for a fortnight. The only exceptions will be Pacific Islanders who are transiting to their home countries. Morrison said this measure would be effective in “flattening the curve”. As foreign travellers dry up, most incoming traffic will be Australians returning home. Foreign cruise ships are to be stopped from arriving for 30 days in what will be a rolling ban. The cessation of non-essential gatherings of 500 or more has moved from advice on Friday to a formal prohibition, which will be backed by state law. Morrison flagged the threshold could soon be lowered. On the enforcement side he said: “the states and territories wisely are not going to create event police or social distancing police … But the legislation impact would mean that if a person did fail to observe the 14 day self-isolation or if an event was organised, that would be contrary, once those provisions are put in place, to state law”. Berejiklian was quick to say NSW already had the powers to enforce self-isolation, emphasising what was involved “is a matter of life and death”. This recalled her strong language of a few days ago when she said the situation was “not business as usual”. Work is underway on restrictions on visits to nursing homes and arrangements for indigenous communities as well as further restrictions on enclosed gatherings, which is likely to cut the 500 number. The “national cabinet” will review the position on Tuesday night. Read more: VIDEO: your coronavirus and COVID-19 questions answered by experts As for federal cabinet, it will be “social distancing” with “no more handshakes”, more meetings by video conferences, and less travelling. Morrison has already cancelled some engagements. So far schools generally are not being closed (though some individual schools are shutting down). It’s said closing schools could promote community transmission, with children out and about. Many would be left with grandparents who would be in the most vulnerable age group. Also, if parents had to stay at home to care for their kids, this could deplete the health work force. But the question of schools remains in the frame. Arrangements for next week’s parliament are still being worked on, and the presiding officers have had talks with Murphy. The sitting is likely to be kept as short as needed to get through the legislation necessary for last week’s $17.6 billion stimulus package. Opposition leader Anthony Albanese in his Sunday night national address promised “a spirit of bipartisanship. We will be constructive. We will support the government to protect the health of Australians, but also to protect their jobs and our economy.” The package was all about trying to head off a recession by keeping growth positive in the June quarter. As things are going, that looks like it could require a miracle as well as the package. Many small businesses will collapse, despite the help the government is offering. Almost certainly, a lot more stimulus will be needed, with the question only the amount. But a measure of how deep the crisis is becoming is that at the moment, the national conversation is mostly about health, not economics.