Just like humans, animals like living near coastal plains and waterways. In fact, cities such as Sydney and Melbourne are “biodiversity hotspots” – boasting fresh water, varied topographies and relatively rich soil to sustain and nourish life.

Recent research showed urban areas can support a greater range of animals and insects than some bushland and rural habitat, if we revegetate with biodiversity in mind.

Read more: How you can help – not harm – wild animals recovering from bushfires

Urban regeneration is especially important now, amid unfathomable estimates that more than one billion animals were killed in the recent bushfires. Even before the fires, we were in the middle of a mass extinction event in Australia and around the world.

Losing animals, especially pollinators such as bees, has huge implications for biodiversity and food supplies.

My team and I are creating a B&B Highway – a series of nest boxes, artificial hollows and pollinating plants - in Sydney and coastal urban areas of New South Wales. These essentially act as “bed and breakfasts” where creatures such as birds, bees, butterflies and bats can rest and recharge. Everyday Australians can also build a B&B in their own backyards or on balconies.

I spoke to Charles Sturt University ecologist Dr Watson about the importance of protecting animals such as pollinators during the climate crisis. He said:

The current drought has devastated inland areas – anything that can move has cleared out, with many birds and other mobile animals retreating to the wetter, more temperate forests to the south and east.

So, when considering the wider impacts of these fires […] we need to include these climate refugees in our thinking. 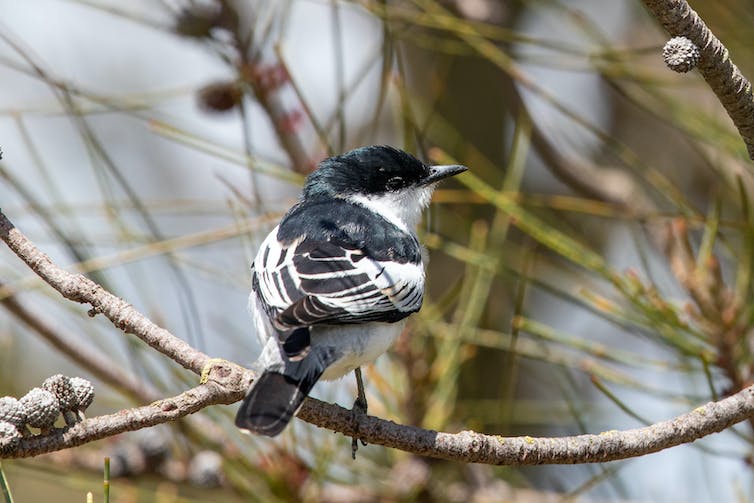 Native birds like the white-winged triller have been spotted in urban areas. Shutterstock

Many woodland birds such as honeyeaters and parrots have moved in droves to cities, including Sydney, over the last few years because of droughts and climate change, attracted to the rich variety of berries, fruits and seeds.

Read more: To save these threatened seahorses, we built them 5-star underwater hotels

What’s more, there have been increased sightings of powerful owls in Sydney and Melbourne, squirrel gliders in Albury, marbled geckos in Melbourne, and blue-tongue lizards in urban gardens across south-east Australia.

With so many birds and pollinators flocking to the cities, it’s important we support them with vegetated regions they can shelter in, such as through the B&B Highway we’re developing.

B&Bs on our “highway” are green sanctuaries, containing pollinating plants, water and shelters such as beehives and nesting boxes.

Read more: Spiders are threatened by climate change – and even the biggest arachnophobes should be worried

We’re setting up B&Bs across New South Wales in schools and community centres, with plans to expand them in Melbourne, Brisbane and other major cities. In fact, by mid-2020, we’ll have 30 B&Bs located across five different Sydney municipalities, with more planned outside Sydney.

The NSW Department of Education is also developing an associated curriculum for primary and early high school students to engage them in ecosystem restoration. 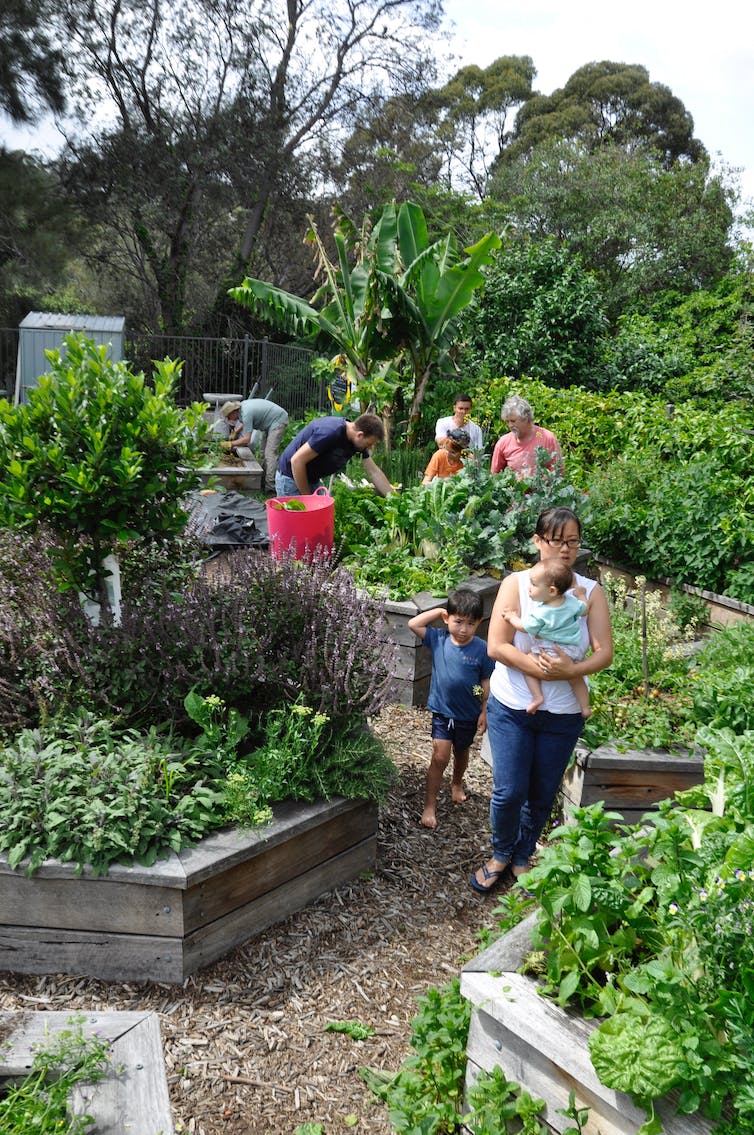 One of the biodiversity havens the author developed to attract pollinators. Author provided

If you have space in your garden, or even on a balcony, you can help too. Here’s how.

Find out what bird species live in your area and which are endangered using the Birdata directory. Then select plants native to your area – your local nursery can help you out here.

The type of plants will vary on whether your local birds feed on insects, nectar, seed, fruit or meat. Use the guide below. 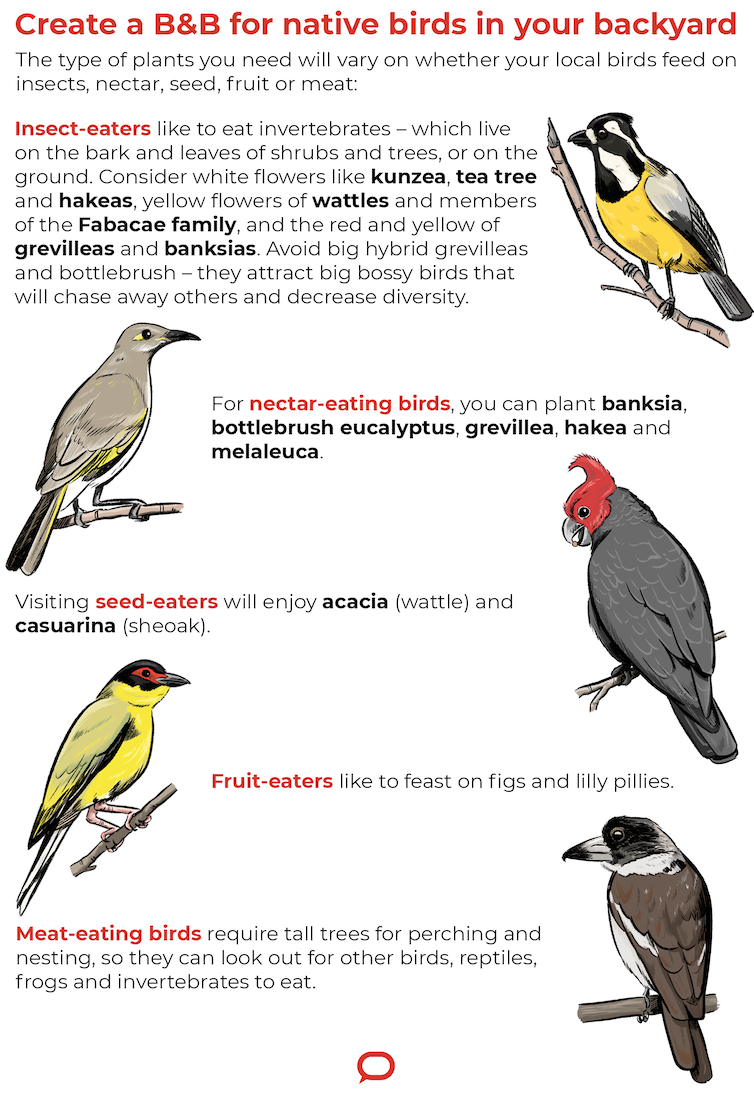 Wes Mountain/The Conversation, CC BY-ND More tips Plant dense shrubs to allow smaller birds, such as the superb fairy-wren, to hide from predatory birds. Order hollows and nesting boxes from La Trobe University to house birds, possums, gliders and bats. Put out water for birds, insects and other animals. Bird baths should be elevated to enable escape from predators. Clean water stations and bowls regularly. For native stingless bees If you live on the eastern seaboard from Sydney northward, consider installing a native stingless beehive. They require very little maintenance, and no permits or special training. These bees are perfect for garden pollination. Suppliers of bees and hives can be found online – sometimes you can even rescue an endangered hive. 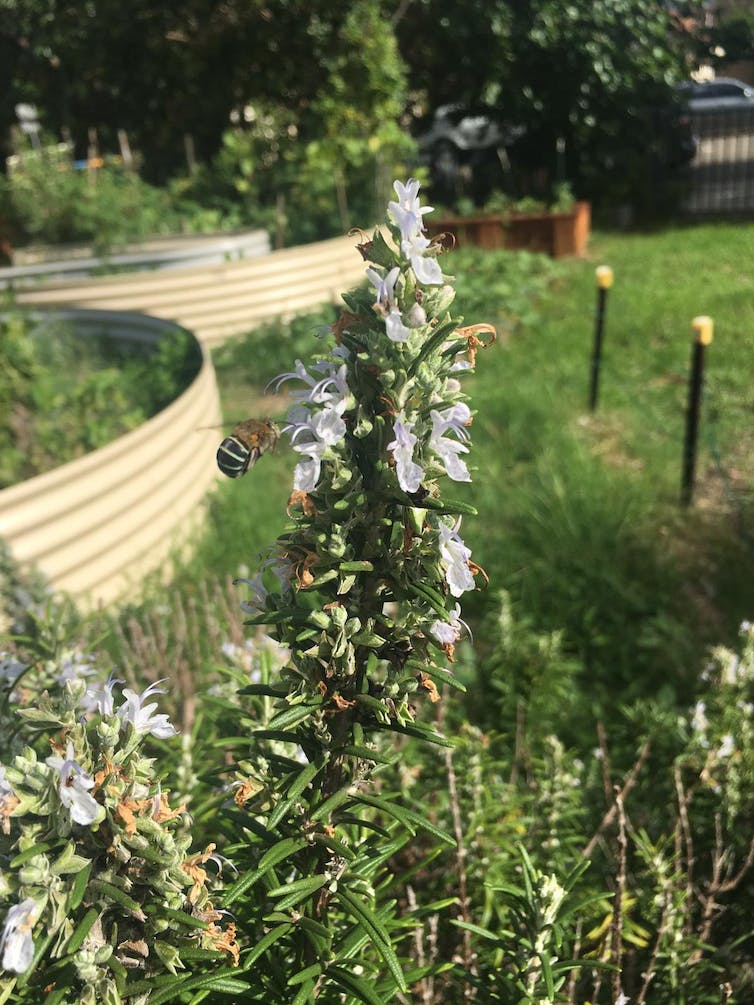 A blue banded bee at a B&B rest stops in NSW. Author provided Also add bee-friendly plants – sting or no sting – to your garden, such as butterfly bush, bottlebrush, daisies, eucalyptus and angophora gum trees, grevillea, lavender, tea tree, honey myrtle and native rosemary. For other insects Wherever you are in Australia, you can buy or make your own insect hotel. There is no standard design, because our gardens host a wide range of native insects partial to different natural materials. 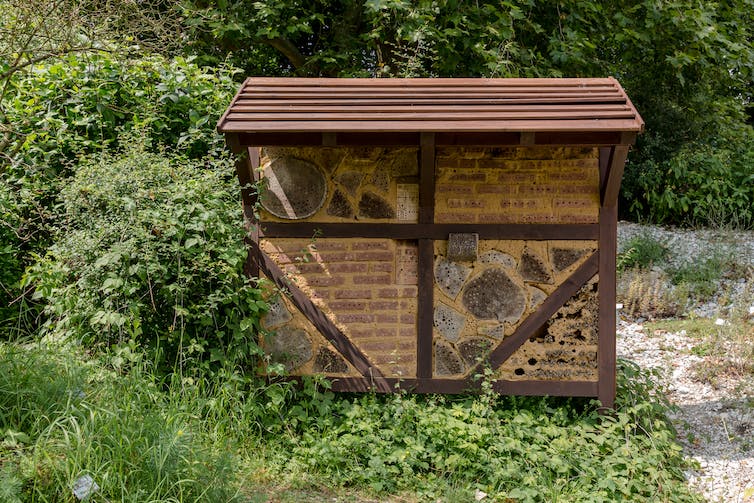 An insect hotel. Note the holes, at a variety of depths, drilled into the material. Dietmar Rabich/Wikimedia Commons, CC BY-SA Building your insect hotel Use recycled materials (wooden pallets, small wooden box or frames) or natural materials (wood, bamboo, sticks, straw, stones and clay). Fill gaps in the structure with smaller materials, such as clay and bamboo. In the wood, drill holes ranging from three to ten millimetres wide for insects to live in. Vary hole depths for different insects – but don’t drill all the way through. They shouldn’t be deeper than 30 centimetres. Give your hotel a roof so it stays dry, and don’t use toxic paints or varnishes. Place your insect hotel in a sheltered spot, with the opening facing the sun in cool climates, and facing the morning sun in warmer climates. Apartment-dwellers can place their insect hotels on a balcony near pot plants. North-facing is often best, but make sure it’s sheltered from harsh afternoon sunshine and heavy rain.