The state-owned company says the operations will be “strictly managed” and produce timber for power poles, bridges, flooring and decking.

VicForests says it did not cut down the trees - they were cut or pushed over by the army, firefighters or road crews because they blocked the rood or were dangerous. The company said it simply removed the logs to put them “to good use”.

However the science on the impacts of post-fire logging is clear: it can significantly impair the recovery of burned ecosystems, badly affect wildlife and, for some animal species, prevent recovery.

We acknowledge that for safety reasons, some standing and fallen burnt trees must be removed after a fire. But wherever possible, they should remain in place.

Hollows in fire-damaged trees and logs provide critical habitat for animal species trying to survive in, or recolonise, burned forests.

Detailed studies around the world over the past 20 years, including in Australia, have demonstrated the damage caused by post-fire logging.

Indeed, the research shows post-fire logging is the most damaging form of logging. Logging large old trees after a fire may make the forests unsuitable habitat for many wildlife species for up to 200 years.

Long-term monitoring data from extensive field surveys shows hollow-dependent mammals, such as the vulnerable greater glider, generally do not survive in areas burned and then logged. Research by the lead author, soon to be published, shows populations are declining rapidly in landscapes dominated by wood production.

Forests logged after a fire have the lowest bird biodiversity relative to other forests, including those that burned at high severity (but which remain unlogged). Critical plants such as tree ferns are all but eradicated from forests that have been burned and then logged.

Soils remain extensively altered for many decades after post-fire logging. This is a major concern because runoff into rivers and streams damages aquatic ecosystems and kills organisms such as fish. 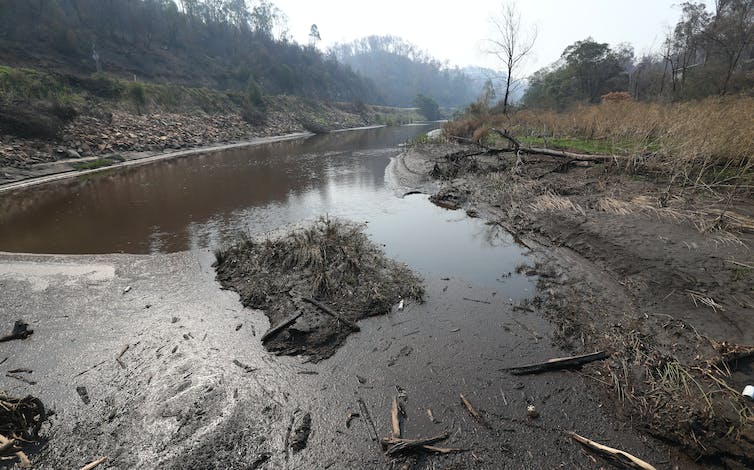 Soiled water after a bushfire is a major ecological problem. AAP

Fire badly disrupts forest ecosystems. Animals and plants then begin recovering, but most forests and the biota they support simply cannot deal with the second intense disturbance of logging so soon after a first one.

For example, young germinating plants are highly vulnerable to being flattened and destroyed by heavy logging machinery. And in an Australian context, post-fire logging makes no sense in the majority of eucalypt-dominated ecosystems where many tree species naturally resprout. This is an essential part of forest recovery.

Logs provide shade, moisture and shelter for plants, and rotting timber is food for insects - which in turn provide food for mammals and birds.

Read more: Logged native forests mostly end up in landfill, not in buildings and furniture

Living and dead trees are also important for fungi — a food source for many animals, including bandicoots and potoroos which have been heavily impacted by the fires.

While the sight of burnt timber can be disheartening, landholders should resist the urge to “clean up”. 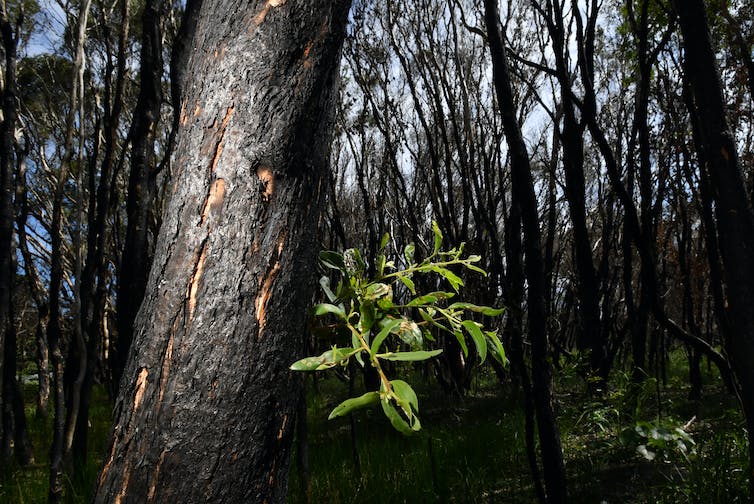 Some trees that appear dead may in fact be about to resprout. Darren England/AAP

It doesn’t add up

Research in North America suggests debris such as tree heads, branches and other vegetation left by post-fire logging not only hinders forest regeneration, but can make forests more prone to fire.

And the economics of logging, particular after a fire, is dubious at best. Many native forest logging operations, such as in Victoria’s East Gippsland, are unprofitable, losing millions of taxpayer dollars annually.

Read more: Yes, the Australian bush is recovering from bushfires – but it may never be the same

Post-fire logging certainly has no place in national parks. But for the reasons we’ve outlined, it should be avoided even in state forests and on private land. Million hectares of vegetation in Australia was damaged or destroyed this fire season. The last thing our forests need is yet more disturbance.

VicForests response: VicForests told The Conversation that timber currently being removed by VicForests, at the direction of the Chief Fire Officer, is from hazardous trees that were cut or knocked over to enable the Princes Highway to be re-opened.

It said the timber would be used for fence restoration, firewood and to support local mills “protecting jobs, incomes and families. It would otherwise be left in piles on the side of the highway”.

“Any further post-fire recovery harvesting will occur in consultation with government including biodiversity specialists and the conservation regulator, following careful assessment and protection of high conservation values,” VicForests said.

“Sensitive harvesting including the retention of habitat trees and active re-seeding is more likely to result in a successfully regenerated forest and a supportive environment for threatened species. This regenerating forest will have the same fire risk as natural regeneration following bushfire.”

The company’s senior planning manager Dean Kearney said the Environment Protection Authority, with the input of scientific experts “has provided Forestry Corporation with site-specific conditions for selective timber harvesting operations in designated parts of Mogo and South Brooman State Forests. These areas were previously set aside for timber production this year but have now been impacted by fire.”

“Strictly-managed selective timber harvesting will help prevent the loss of some high-quality timber damaged by fire, including material that will be in high demand for rebuilding, while ensuring the right protections are in place for key environmental values, particularly wildlife habitat, as these forests begin regenerating,” he said.

“The harvesting conditions augment the already strict rule set in place for forest operations and include requirements to leave all unburnt forest untouched and establish even more stringent conditions to protect water quality, hollow-bearing trees and wildlife habitat.”