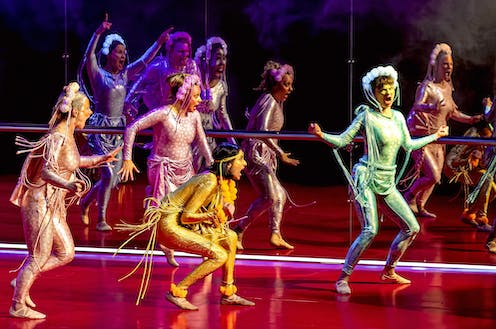 Dance is at the heart of playwright Clare Barron’s Dance Nation, from the resolutely upbeat ensemble number that opens the show to the poignant solo that ends it.

We are in the hyper-competitive,...

Dance is at the heart of playwright Clare Barron’s Dance Nation, from the resolutely upbeat ensemble number that opens the show to the poignant solo that ends it.

We are in the hyper-competitive, vapid and vulgar pre-pubescent dance culture of the TV series Dance Moms, thankfully mostly absent from the Australian dance scene.

Larissa McGowan’s choreography mercilessly recreates the cut-throat world of American competition dance and is as pivotal in conveying the narrative arcs of its characters as Barron’s script and Imara Savage’s ebullient direction.

A finalist for the Pulitzer Prize for Drama in 2019, Dance Nation reveals Barron’s fearlessness in tackling the under-explored dramatic territory of young girls entering puberty, but is not without flaws.

Dance teacher Pat’s dance troupe is launching a campaign to win a national dance competition, and Pat’s claim to glory is a dance routine of jaw-dropping cheesiness: a jazz ballet paean to Mahatma Gandhi. The dancers, decked out in metallic pastel unitards, disport themselves around Gandhi seated on a glittery disco version of a golden lotus, to With Arms Wide Open.

Apart from bringing the house down with its conceptual incongruity, this hilarious number reveals Pat, with his delusions of artistic profundity, to be oblivious to the damage he is doing to his charges.

Pat urges his dancers to channel their inner Gandhi and meditate on the suffering of the world, while utterly blind to the suffering under his own nose. Played with a tense doggedness by Mitchell Butel in his first role since taking on the directorship of the State Theatre Company, Pat is the embodiment of the cliché-spouting coach who vicariously realises his own ambitions by pushing his students to win no matter what the cost.

It is the cost of this competitiveness that propels the action.

Only one dancer can be selected for the solo. When Pat unexpectedly bestows the role on Zuzu (always second to her bestie Amina), he opens up a repressed rivalry. Both girls dream of becoming dancers, but Amina is more gifted and more ambitious. When the opportunity arises, she usurps Zuzu’s place and wins the prize that will launch her professional career.

One of the conceits of the play is the preteen girls are played by grown women. Chika Ikogwe owns the role of Zuzu, ably conveying her vulnerability and insightfulness. 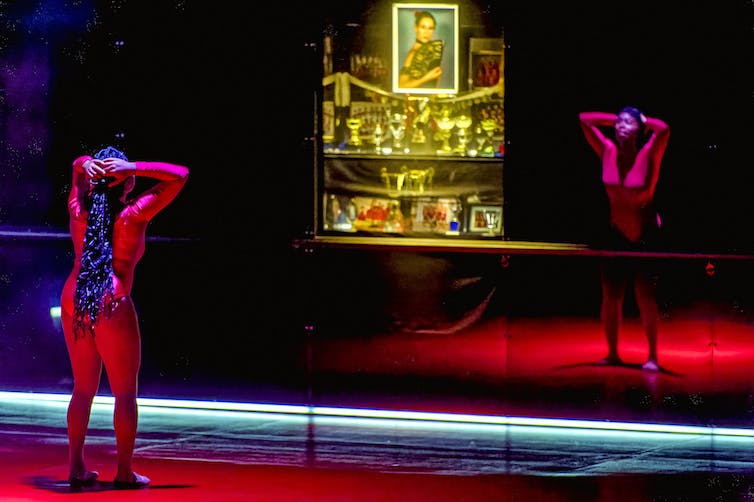 Although she makes the most of the part, Yvette Lee’s Amina has to work with the weakest aspect of the script. According to Barron’s program notes, the play’s feminist intention is to validate female ambition, but the unlikeability of the only “successful” character undermines this.

While the other girls profess they “love” Amina, they obviously don’t like her much. In the flash-forward at the end it’s clear the one truly ambitious girl, the one who goes on “winning and winning”, is destined for a lonely life.

Barron’s writing of character is generally underdeveloped, and Amina’s success undercuts the play’s message. But this flaw is balanced by the play’s outrageous depiction of girls grappling with emerging sexuality and power.

In true adolescent fashion, the six girls and one dorky boy, Luke (nicely played by Tim Overton), are fixated on sex.

There is an undercutting of the real in several shifts from present to future, the girls carrying the victories and traumas of their pubescence into adulthood. This transition is nicely encapsulated as Connie (Emma Harvie) and Sofia (Tara Morice) admit their lifelong struggles with depression.

Jonathon Oxlade’s set comprises a dance studio with mirrored walls where daily reality merges with fantasy sequences. The mirrors become windows: revealing mother figures (all played by Elena Carapetis) urging on their progeny; revealing the trophies and triumphs of past teams.

Dance Nation is unsubtle and flawed, but the uniformly terrific cast and the exuberant energy of this production make it well worth seeing.