The NSW government has just introduced a bill that will, among other significant reforms, make it easier for a jury to be informed about the prior convictions of a person on trial for a sex offence involving a child.

The governments of Victoria, Tasmania, the ACT, the NT and the Commonwealth are likely to introduce similar legislation.

Disclosing evidence of an accused’s prior convictions has always been a difficult area of criminal law, requiring a balance of conflicting interests.

Read more: All about juries: why do we actually need them and can they get it 'wrong'?

Disclosure may demonstrate a propensity to offend in a particular way and therefore be helpful to the prosecution. But it may also prejudice a jury against the accused in an unfair manner.

The reforms proposed in NSW have widespread support among advocates and organisations working with victims of sexual abuse. They are also likely to be supported by the opposition.

But they have evoked a strong response from lawyers who view them as undermining fundamental principles in our legal system – the presumption of innocence and the right to a fair trial.

Despite numerous changes to laws governing sexual offences in past decades, conviction rates for these offences remain substantially lower than for other types of crimes

There are many possible explanations for this, including the fact these cases often involve acts performed in secret, frequently do not have conclusive forensic evidence and ultimately come down to the word of the victim against the word of the accused.

When the victim is a child, difficulties in describing the assault and giving evidence are also significant.

Read more: To believe or not to believe: child witnesses and the sex abuse royal commission

Noting the low conviction rates – as well as the issue of offenders who have multiple victims – the Royal Commission into Institutional Responses to Child Sexual Abuse recommended that evidence law be amended so jurors could get a more complete understanding of an accused’s past. Achieving this goal required significant reform. 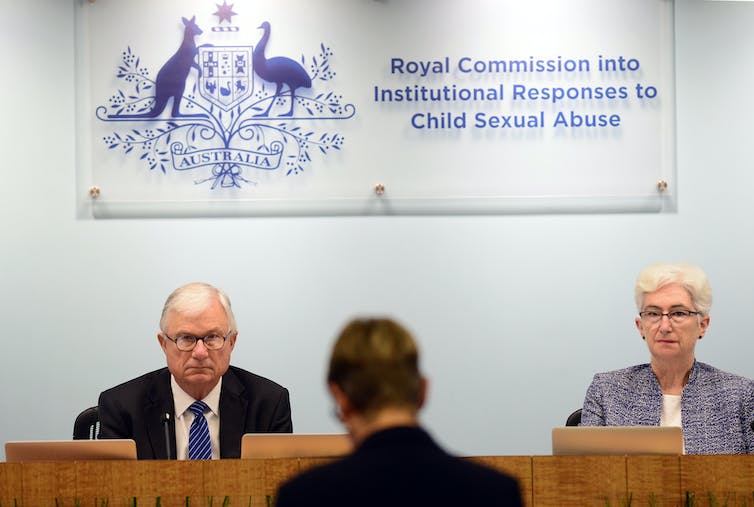 The royal commission recommended jurors in child abuse trials be permitted to hear about the accused’s past convictions for sex abuse. Royal Commission/PR handout

A jury in a criminal trial in Australia is not usually told about the criminal history of the accused. In cases where there is no jury, the judge or magistrate is also not permitted to take into account any prior offending when deciding guilt or innocence.

The justification for this restriction is that it prevents the jury, magistrate or judge from being improperly influenced by a defendant’s past. This ensures they restrict their considerations to the evidence presented in the present case.

However, some exceptions already exist relating to credibility and what is known as “tendency and coincidence evidence”.

Tendency evidence can show a person has a propensity to act in a certain way. Coincidence evidence can demonstrate that, because the person has acted in a very similar way in the past, they are likely to have committed the offence for which they are currently on trial.

In jurisdictions like NSW that have adopted the uniform evidence law, this type of evidence can only be admitted if it has “significant probative value” (that is, it is highly relevant to the current case) and its value “substantially outweighs” any prejudicial effect for the accused.

Given this high threshold, an accused’s prior offending is not commonly disclosed to a jury before it reaches a verdict.

What will the reforms do?

The reforms will allow more information about defendants to be admitted in trials involving child sex offences. Specifically, the changes will:

Collectively, the reforms will strengthen the prosecution of these offences.

Concern about the changes

These changes are intended to make trials fairer for victims of child sexual abuse and increase the rate of convictions.

The royal commission referred to empirical research conducted on its behalf to support its view this type of reform could occur without unfair prejudice to a defendant.

Some lawyers have endorsed reform. Others argue the changes will undermine the presumption of innocence, remove the task of proving guilt beyond reasonable doubt from the prosecution and may have the effect of denying the accused a fair trial.

They are concerned this could result in innocent people going to jail.

Defence lawyers are worried if juries know a person committed a similar crime in the past, they will assume he or she probably committed the crime for which they are currently on trial, as well.

Or a jury may simply believe the defendant deserves to be punished for past offending, irrespective of the evidence in the case before them. Critics think this is especially likely to occur in child sexual abuse cases, which evoke a strong community reaction.

Defence lawyers also believe the reforms will improperly shift the focus in a criminal trial from the prosecution having to prove all the elements of a crime to consideration of whether the accused is the sort of person likely to have committed the offence.

The proposed changes undoubtedly reflect a significant shift in the criminal law. They demonstrate that while concern about a fair trial traditionally focused on the rights of the accused, contemporary reforms are increasingly grounded in concern the criminal justice system be fair for victims.