But figures on Australia’s emissions from the Department of the Environment and Energy help frame the political debate, and put the policies of both Labor and the Coalition in context....

But figures on Australia’s emissions from the Department of the Environment and Energy help frame the political debate, and put the policies of both Labor and the Coalition in context.

But the government’s projections show this will slow to an average of only 2.4 million tonnes per year over the next 10 years.

Achieving Labor’s target of net-zero by 2050 would require much faster emissions reduction: about 25 million tonnes a year.

Business groups and economists agree putting a price on carbon is the best way to meet this objective in a low-cost way. But amid this climate policy hodge-podge, no one is talking about it anymore.

The summer bushfire crisis prompted demands from business and community for climate action, triggering a repositioning by the Morrison government

There are two arms to the government’s strategy.

The first uses the falling emissions of the past 15 years to support the argument that its target of reducing greenhouse gas emissions to 26-28% below 2005 levels by 2030, is achievable. And, by implication, so will be any future targets.

The problem with this claim is that the past success has been driven by not-to-be-repeated land use changes, the now-finished Renewable Energy Target, and coal plant closures. It has not been achieved with current policies. And even if the current target is met, it leaves a tough post-2030 challenge.

The second arm builds the case for future emissions reduction on technology and not policy, thereby avoiding the firm targets that are poison within the Coalition.

Morrison feels he must focus his narrative on a positive technology action story without quantifying the costs of these actions or of inaction. This is a high-wire act, but he has little political choice in the short-term. It may yet buy him the space he needs in the medium-term.

Albanese has almost certainly made the right political call to embrace the target of net-zero emissions by 2050. He is on the right side of the broad Australian debate.

Yet, this call brings its challenges. Labor has a year or so to develop a clear and compelling narrative that uses the target as the long-term objective, builds an economy-wide pathway to its achievement, and is supported by a policy framework to follow that pathway.

Labor has considerable experience, much of it painful, from which to learn. It must provide enough substance to be credible but avoid getting bogged down using economic modelling as a precise forecasting tool. It must also directly address the role of government in supporting structural adjustment as the new economy emerges. 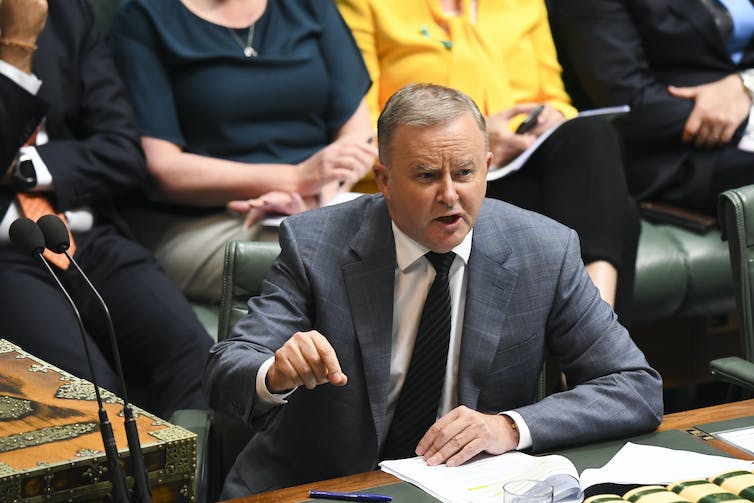 Albanese has made the right political call to embrace the target of net-zero emissions by 2050. AAP Image/Lukas Coch

The big difference this time around is Labor can harness the widespread support across many areas of industry and the community.

Albanese has already begun to build his narrative around these themes. His challenge is to sustain the momentum.

In all the strategies and tactics of this round of the climate wars, the most disturbing development must be that carbon pricing became roadkill on the way.

Emissions must be reduced across the economy at lowest cost. Business groups, including the Business Council of Australia, as well as economists, recognise a carbon price is the best way to meet this objective. And there are several models to choose from, including cap-and-trade, baseline-and-credit and emissions intensity schemes.

Read more: One year on from the carbon price experiment, the rebound in emissions is clear

The key advantage of an economy-wide carbon price is that it provides an overall emissions constraint and leaves it to the widest possible range of businesses and economic activities to find lowest-cost solutions.

Sector-based approaches or having governments pick winners – such as the Commonwealth’s Underwriting New Generation Investment scheme – can reduce emissions. But this will always come at a higher cost than a carbon price – a cost borne by consumers and taxpayers.

The government seems captured by its own past success in killing carbon pricing mechanisms, such as Labor’s carbon price regime which ran from 2012 to 2014. This is despite the fact that two existing policies it has overseen – the Climate Solutions Fund and the Renewable Energy Target – incorporate explicit and implicit carbon prices respectively.

Labor seems captured by its past failure with carbon pricing, such that Albanese now argues it’s unnecessary. At the same time, he refers positively to the abandoned National Energy Guarantee as the sort of policy he could support, without apparently recognising it would have included a form of carbon pricing and trading.

As we settle into the third decade of the 21st century, it seems our best hope for the near-term is a combination of sector-based, technology-driven, third-best policies that will deliver progress for a while.

Long-term environmental and economic success will depend on returning to first-best policies when we learn from the consequences.