Bernie Sanders has easily won the Nevada Democratic caucus, cementing his status as front-runner for the Democratic nomination in the US presidential election.

Caucuses are managed by the party, not the state’s electoral authorities. After long delays in reporting results at both Iowa and Nevada, it should be a relief very few caucuses remain on the Democratic schedule.

Most other states vote with primaries, or straightforward ballot elections.

Read more: The US presidential primaries are arcane, complex and unrepresentative. So why do Americans still vote this way?

The latest RealClearPolitics national poll average for the Democratic presidential nomination has Sanders with a clear lead of 29.3% of prospective voters, ahead of Biden at 17.2%, Michael Bloomberg 15.3%, Warren 13.2%, Buttigieg 9.8% and Klobuchar 6.3%.

In the US Democratic primary system, pledged delegates are allocated proportionally to all candidates who clear the 15% vote threshold, both within a state and congressional district. Candidates need to win a majority of delegates (at least 1,990) by July’s Democratic National Convention to win the nomination.

With the latest national polls, Sanders is the only candidate far enough above 15% to be assured of clearing that threshold virtually everywhere. If the poll results are reflected on Super Tuesday on March 3, when 14 states vote and 34% of all pledged delegates are awarded, Sanders’ share of delegates would far exceed his vote share.

There is one more contest before Super Tuesday: the South Carolina primary on Saturday.

With the state’s large African-American population, Biden had been expecting a big win here, but his lead over Sanders in the latest RealClearPolitics poll average has plunged from 14 percentage points in late January to just three points now.

The two most populous states voting on Super Tuesday are California and Texas. Bloomberg will contest Super Tuesday states after sitting out the first four nominating contests.

The FiveThirtyEight forecasting model for the Democratic nomination gives Sanders a 45% chance of winning a pledged delegate majority. Nobody winning a majority is at 41%, with a Biden majority a distant third at 9%.

Bloomberg had been gaining in the polls, at least before Wednesday’s widely criticised debate performance. However, in a direct match-up with Sanders, he got crushed by a 57-37% margin in an NBC/WSJ poll.

Read more: Yes, the Iowa caucuses had major glitches, but the results may not even matter that much

While Bloomberg is winning the votes of those Democrats who believe only a billionaire can beat Donald Trump, many Democrats (particularly Sanders supporters) dislike giving the nomination to a billionaire.

If nobody comes near a majority of pledged delegates, there will be a contested Democratic convention in mid-July. Should this occur, it would be the first since 1952. If Bloomberg defeated Sanders at a contested convention, the Democratic Party’s left would react badly to the perception of a billionaire stealing the nomination from their guy.

Trump’s ratings, meanwhile, are trending up, thanks to the good US economy. In the FiveThirtyEight aggregate, his net approval is -7.8% with polls of registered or likely voters.

Trump still trails the leading Democrats in RealClearPolitics national polling averages, with Sanders and Biden leading him by about 4.5 percentage points in head-to-head contests, Bloomberg leading by 3.3 points, and Buttigieg, Warren and Klobuchar leading by around two points. 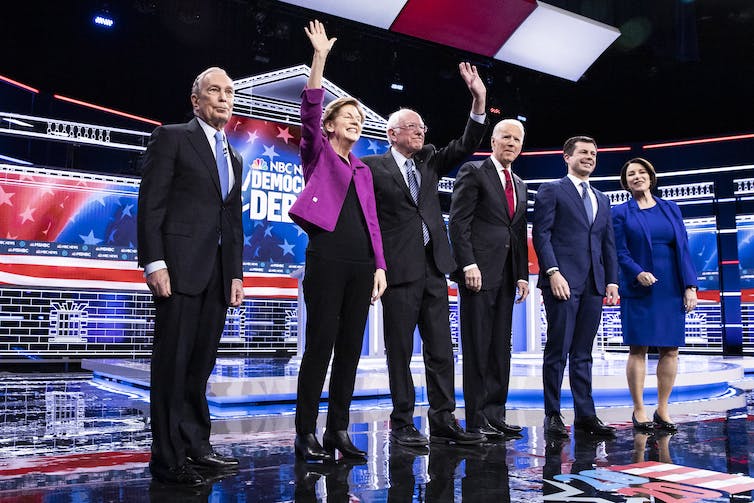 This week’s Newspoll, conducted February 19-22 from a sample of 1,510 people, gave Labor a 51-49% lead, a one-point gain for the Coalition since the last Newspoll three weeks ago.

Nearly four in ten (38%) were satisfied with Prime Minister Scott Morrison’s performance (up one), and 58% were dissatisfied (down one), for a net approval of -20.

However, Labor leader Anthony Albanese’s net approval slumped eight points to -5, reversing the large jump for him after the bushfire crisis. Albanese’s lead over Morrison as better PM fell to 41-40%, from 43-38%.

On questions about the bushfires, 56% of respondents thought the main cause of the crisis was a failure by state governments to conduct adequate hazard-reduction burns, while 35% said climate change.

Read more: Nearly 80% of Australians affected in some way by the bushfires, new survey shows

Half of respondents said they would be prepared to pay nothing more for electricity to meet the emissions target (down eight points since October 2017) and 41% said they would pay more (up 11 points).

In my last article analysing Newspoll, I was sceptical of the durability of Labor’s 52-48% lead. With the bushfires now well in the past, the government appears to be recovering.

While the climate change questions showed more people in favour of prioritising the environment, there were still more respondents who chose lowering costs and preventing blackouts as top priorities.