She was voicing the heightened concern in Warringah about climate change and the environment, and repudiating the denialism of one-time Prime Minister Abbott, who once described climate change as “absolute crap”.

On Monday, Steggall released her Climate Change (National Framework for Adaptation and Mitigation) Bill 2020. It will be presented to the federal House of Representatives on March 23 for a conscience vote.

The bill came just as horrendous flooding hit the east coast of Australia, not quite extinguishing the fires that, nationally, have killed 33 people, burned 11 million hectares of land, and destroyed thousands of homes.

Steggall’s bill outlines ways to bring Australia’s carbon emissions down to zero by 2050. It focuses on climate risks, with adaptation and mitigation measures to secure a more resilient Australia, including establishing an independent climate change commission to advise parliament.

Steggall is a non-aligned, conservative independent. So while the bill isn’t likely to pass – most private members bills don’t – hers is unique in its non-partisan nature. And it could even shift Australia’s stubborn climate change politics through her #ClimateActNow appeal to the public.

What the bill says

The federal government, and Prime Minister Scott Morrison in particular, have faltered in leadership and policy in the face of Australia’s recent disasters. He argues the government will not be panicked into stronger climate policy.

But Steggall’s bill changes the climate policy conversation entirely. It calls for a detailed risk assessment of the challenges of warming across all sectors, and national plans for adapting to those challenges, while reducing emissions in a transparent and accountable way.

It provides five-year plans to reduce emissions to zero by 2050, linking climate risks and impacts with emissions reduction. The plans are sector-wide, as similar plans are in the UK, with safeguards to ensure equitable transition, and they’ll be revised to adjust emissions reduction targets every five years.

This is a climate policy approach that reflects national and international malaise about Australia’s recent bush fire horrors, and now flooding crisis, because proposing zero emissions by 2050 is what more than 60 countries have already promised.

What’s more, the bill calls for transparent monitoring, reporting and accountability in line with global expectations, by establishing an independent Climate Change Commission. The commission’s role wouldn’t be to develop policy, but to ensure the five-year climate plans are progressing towards their targets.

On the same day as its release, Business Council of Australia CEO Jennifer Westacott put forward her support for a net zero emissions target, saying Zali’s bill offered a sensible climate target the major parties could agree on.

Westacott’s support signals to the Morrison government the business community is looking for more ambitious and targeted climate policy action, anticipating the new jobs that will follow a transition to a low carbon economy.

But the main strength of Zali’s bill is its non-partisan nature. And it’s important for side stepping toxic climate politics and for proposing reasoned, apolitical, tried and tested policy solutions. 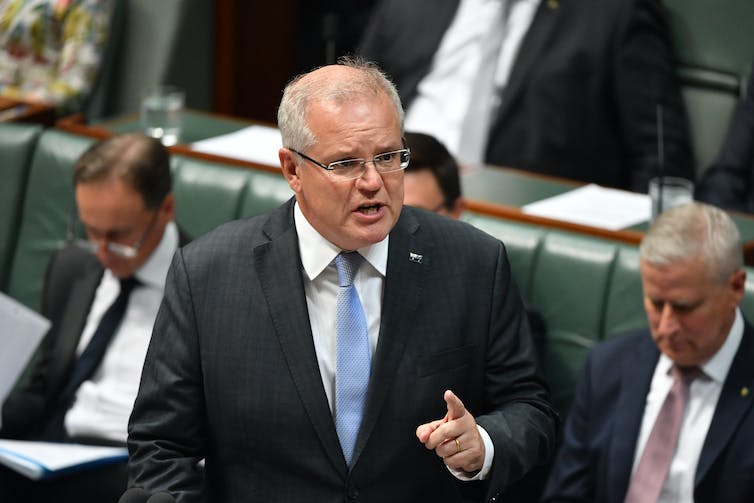 The bill is modelled on the David Cameron government’s 2008 Climate Change Act in the UK – legislation from a conservative party. This act sets carbon budgets, which can be controversial, but the UK are successfully reducing emissions.

Read more: The UK has a national climate change act – why don't we?

All it would take for Zali’s bill to pass is for a majority of MPs in the House of Representatives to vote for it, meaning some members of the government would need to use their conscience vote.

If this were to happen, it would be a relief for business and industry, which are looking for certainty; for State and Territories, which are building vibrant renewable energy economies; and for Australians for whom climate change is now a foremost concern.

Although members of parliament are elected to represent their constituents, political allegiance invariably trumps popular will as they vote along party lines.

So Steggall is appealing directly to voters to contact their MP to secure support for her bill, and through her “Climate Act Now” petition.

Read more: Australia's bushfire smoke is lapping the globe, and the law is too lame to catch it

If enough constituents do this, the climate debate may shift as a result of Zali’s efforts. Whether or not her legislation is adopted as she has proposed it, it may still open the door to a revised version resolving Australia’s climate policy deadlock.

This is an almost impossible task, but Zali will likely build support as she did in seeking her election in Warringah, by staying focused, by meeting as many people as possible, and by staying true to her ideas.

Correction: The hashtag #ClimateActNow is being promoted, not #ClimateActionNow, which was used in a previous version of the article.