As high-rise cities grow upwards and outwards, increasing numbers of birds die by crashing into glass buildings each year. And of course many others break beaks, wings and legs or suffer other physical harm. But we can help eradicate the danger by good design.

Most research into building-related bird deaths has been done in the United States and Canada, where cities such as Toronto and New York City are located on bird migration paths. In New York City alone, the death toll from flying into buildings is about 200,000 birds a year.

Across the US and Canada, bird populations have shrunk by about 3 billion since 1970. The causes include loss of habitat and urbanisation, pesticides and the effects of global warming, which reduces food sources.

An estimated 365 million to 1 billion birds die each year from “unnatural” causes like building collisions in the US. The greatest bird killer in the US remains the estimated 60-100 million free-range cats that kill up to 4 billion birds a year. Australia is thought to have up to 6 million feral cats.

Read more: For whom the bell tolls: cats kill more than a million Australian birds every day

But rampant global urbanisation is putting the reliance on glass buildings front-of-stage as an “unnatural” cause of bird deaths, and the problem is growing exponentially.

In the line of flight

Most birds fly at around 30-50km/h, with falcons capable of up to 200km/h. When migrating, birds generally spend five to six hours flying at a height of 150 metres, sometimes much higher.

And that’s where the problems start with high-rise buildings. Most of them are much taller than the height at which birds fly. In Melbourne, for example, Australia 108 is 316 metres, Eureka 300 metres, Aurora 270 metres and Rialto 251 metres. The list is growing as the city expands vertically.

The paradigm of high-rise gothams, New York City, has hundreds of skyscrapers, most with fully glass, reflective walls. One World Trade is 541 metres high, the 1931 Empire State is 381 metres (although not all glass) and even the city’s 100th-highest building, 712 Fifth Avenue, is 198 metres.

To add to the problems of this forest of glass the city requires buildings to provide rooftop green places. These attract roosting birds, which then launch off inside the canyons of reflective glass walls – often mistaking these for open sky or trees reflected from behind. 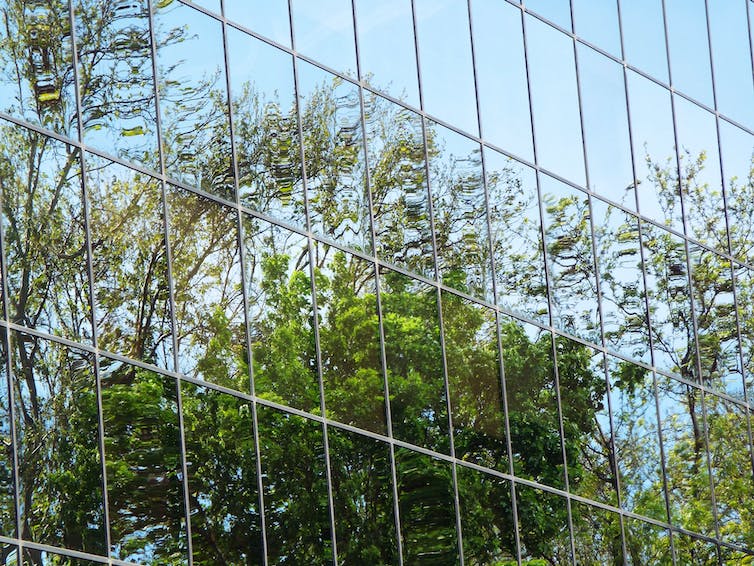 A problem of lighting and reflections

Most cities today contain predominantly glass buildings – about 60% of the external wall surface. These buildings do not rely on visible frames, as in the past, and have very limited or no openable windows (for human safety reasons). They are fully air-conditioned, of course.

Read more: Glass skyscrapers: a great environmental folly that could have been avoided

Birds cannot recognise daylight reflections and glass does not appear to them to be solid. If it is clear they see it as the image beyond the glass. They can also be caught in building cul-de-sac courtyards – open spaces with closed ends are traps.

At night, the problem is light from buildings, which may disorientate birds. Birds are drawn to lights at night. Glass walls then simply act as targets.

Some species send out flight calls that may lure other birds to their death. 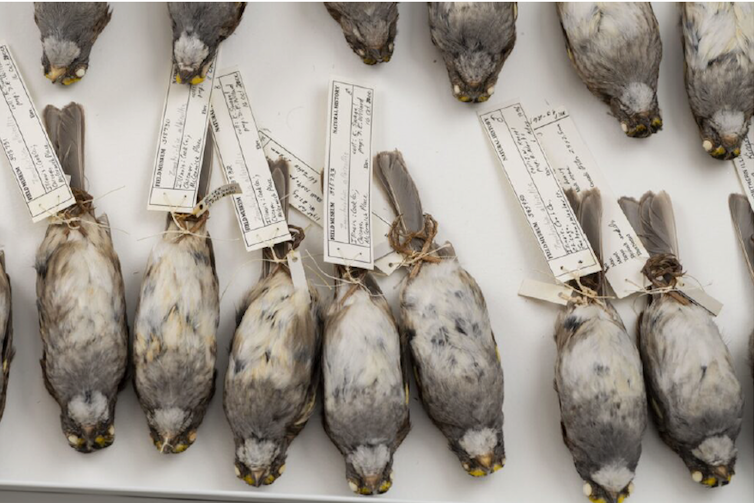 Read more: Want to save millions of migratory birds? Turn off your outdoor lights in spring and fall

We can make buildings safer for birds

Birds see ultraviolet light, which humans cannot. Some manufacturers are now developing glass with patterns using a mixed UV wavelength range that alerts birds but has no effect on human sight.

New York City recently passed a bird-friendly law requiring all new buildings and building alterations (at least under 23 metres tall, where most fly) be designed so birds can recognise glass. Windows must be “fritted” using applied labels, dots, stripes and so on.

The search is on for various other ways of warning birds of the dangers of glass walls and windows.

Combinations of methods are being used to scare or warn away birds from flying into glass walls. These range from dummy hawks (a natural enemy) and actual falcons and hawks, which scare birds, to balloons (like those used during the London Blitz in the second world war), scary noises and gas cannons … even other dead birds.

Researchers are using lasers to produce light ray disturbance in cities especially at night and on dark days.

Noise can be effective, although birds do acclimatise if the noises are produced full-time. However, noise used as a “sonic net” can effectively drown out bird chatter and that interference forces them to move on looking for quietness. The technology has been used at airports, for example.

A zen curtain developed in Brisbane has worked at the University of Queensland. This approach uses an open curtain of ropes strung on the side of buildings. These flutter in the breeze, making patterns and shadows on glass, which birds don’t like.

These zen curtains can also be used to make windows on a house safer for birds. However, such a device would take some doing for the huge structures of a metropolis.

More common, and best adopted at the design phase of a building, is to mark window glass so birds can see it. Just as we etch images on glass doors to alert people, we can apply a label or decal to a window as a warning to birds. Even using interior blinds semi-open will deter birds.

Birds make cities friendlier as part of the shared environment. We have a responsibility to provide safe flying and security from the effects of human habitation and construction, and we know how to achieve that.

This article has been updated to correct the figure for the estimated number of birds killed by the cats in the US to “up to 4 billion”, not 4 million.