Since his inauguration on January 20, 2017, US President Donald Trump has tweeted the words “Witch Hunt” (always with or in capitals) 337 times, or roughly once every three days in his presidency.

As the US Senate’s impeachment trial looms, it is timely to place witch hunts into some historical perspective.

Although the term did not come into common usage until the 1950s — when Arthur Miller wrote his play The Crucible — it refers to the witchcraft persecutions that took place in Europe and America from around 1450 to 1750.

The victims have sometimes been estimated at up to nine million, but modern estimates put the total number in Europe across 300 years as somewhere between 40,000 and 100,000. Although some men were accused and executed, the victims of the witch hunts were mainly women, often socially and economically marginalised. 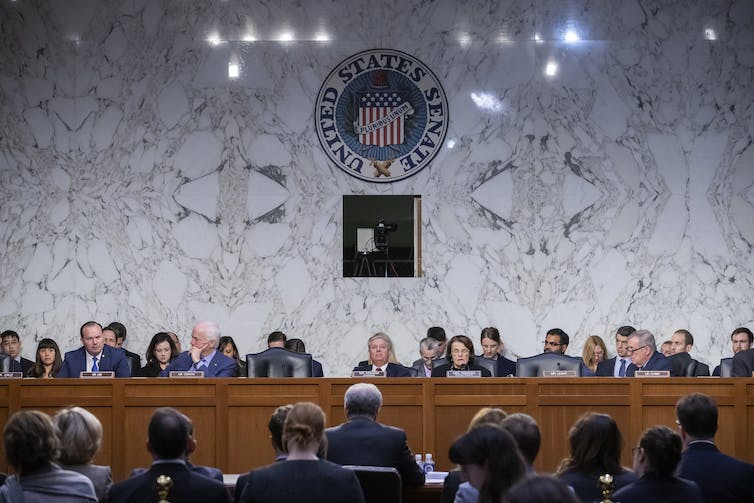 Although there are significant variations across countries and regions, the incidence of women among those prosecuted runs at about 75-80%. In the Salem witch trials in Massachusetts in 1692–3, around 78% of those accused and convicted were women. 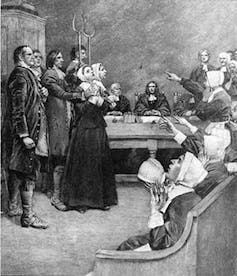 Two alleged witches being tried in Salem, Massachusetts, as part of the infamous witch hunts. Wikimedia

These Salem trials are the only witch trials to which Trump has specifically referred and he has judged them as affording the defendants more proper judicial process than him. By the end of these trials, nineteen people had been hanged, one man was pressed to death with heavy stones, and several had died in prison.

Nearly 200 people were accused of practising demonic magic. It is unlikely any of them would agree with the President’s characterisation of his treatment.

Commonplace in Christian thinking was the idea the evidence for the weakness of women, and their capacity to be “seduced” by Satan, was grounded in the story of Eve in the Garden of Eden.

She was “the weaker vessel” compared to Adam as one biblical text (1 Peter 3.7) put it. Thus, it was believed, women were more prone to the temptations of Satan and thus more likely to be witches.

At the popular level too, women were more likely to be perceived as witches. This is, at least in part because, more often than men, they were on occasion just that. Many women who were persecuted were in the magic or cunning business.

The cunning or wise folk were practitioners of benevolent magic. They used herbal and magical medicine to heal the sick and the bewitched, find buried treasure, identify thieves, tell fortunes, induce love, and undo malevolent magic. But cunning women could turn nasty. Cursing, angry women with the imagined power to do harm were perceived as dangerous disturbers of the social order. 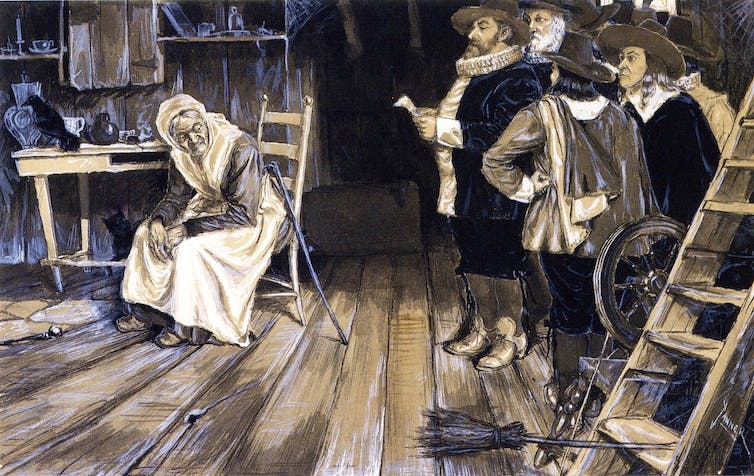 Women were many times more likely to be accused and persecuted as witches than men. The Witch Hunt by Henry Ossawa Tanner (1888) Wikiart

The witchcraft persecutions were driven by Christian theorising about the Devil and his minions. Witches were thought to do evil but they were also heretics.

In his translation of The Malleus Maleficarum, a late medieval text on witchcraft first published in 1486-7, scholar Christoper S. Mackay wrote that this sorcery had six hallmarks: a pact with the Devil, attendance at Satan’s debauched assemblies (called “sabbaths”), sex with the Devil, aerial flight, maleficent magic and the slaughter of babies. None of the President’s so-called “witch hunters” has accused him of any of these activities, so far.

It is likely such cults never existed, and that the witch hunts were the outcome of fears of ideological and social enemies — a hidden “other” working from within society to destroy it. 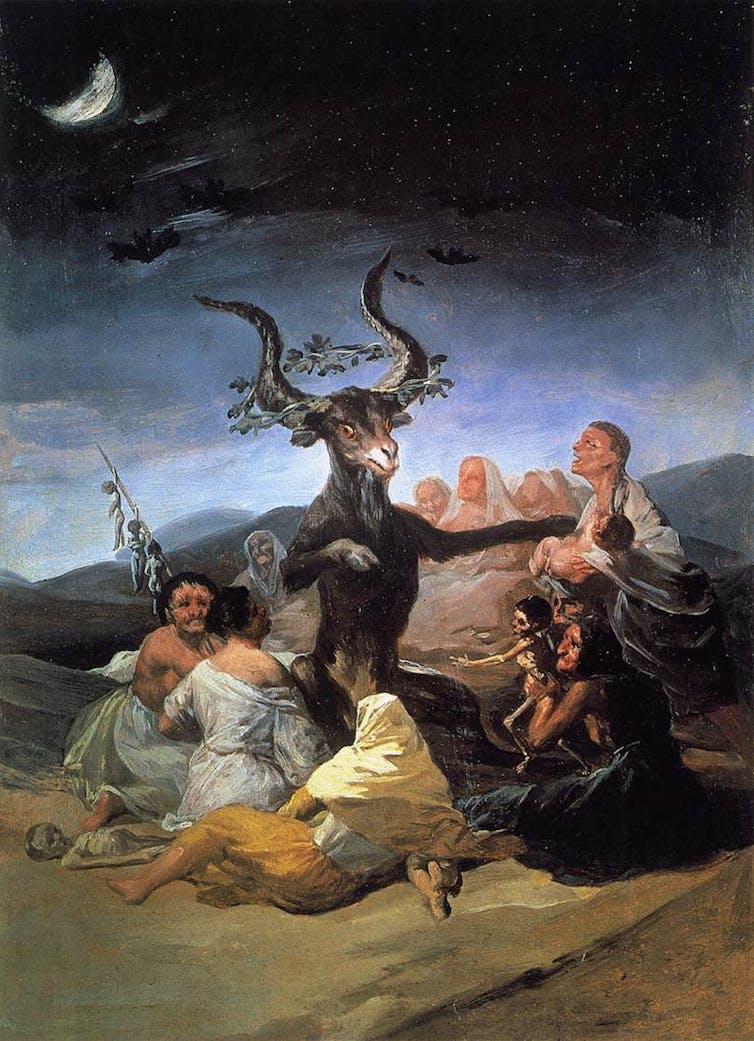 In Francisco Goya’s Witches Sabbath (1798) the devil in the form of a garlanded goat is surrounded by a coven of disfigured, young and ageing witches. Wikiart

It is not a matter for surprise, perhaps, that such a theory should later arise in the Western world, itself tormented by the fear of the subversive Communist operatives within its democracies.

Miller’s 1953 play about the Salem witch trials was an allegory of the persecution of suspected communists by the American state, spearheaded by Wisconsin Senator Joseph McCarthy in the 1950s.

From Miller’s The Crucible and the McCarthy investigations, there is a straight line to Trump’s understanding of a witch hunt – the American state as the inquisitor and persecutor of an innocent individual. 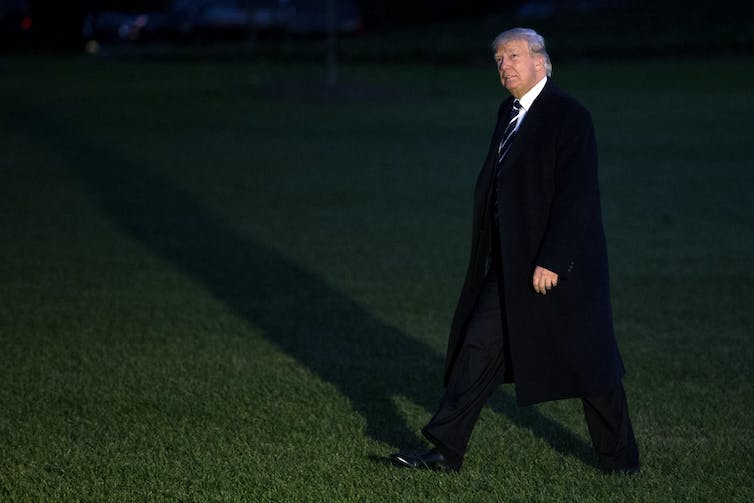 Being a witch is one of the things President Trump has not been accused of. EPA/Shawn Thew

That confessions to impossibly horrible crimes, and fingers pointed at others, were extracted from supposed witches in Europe and Scotland was often the consequence of torture. By contrast, in England, torture was not used to extract confessions nor to “finger” others.

In England, despite King James’s book Daemonologie in 1597 which outlined his belief in witchcraft and the death penalty for those that practised it, it was earthly crime and not demonic dealing that dominated the courts.

Thus, in England, witchcraft persecutions were the consequence of village tensions, of interpersonal conflicts, and of economic difficulties. This was the understanding of witchcraft outlined by English sceptic Reginald Scot in his 1584 book The Discovery of Witchcraft:

She was at my house of late, she would have had a pot of milke, she departed in a chafe because she had it not, she railed, she curssed, she mumbled and whispered, and finallie she said she would be even with me: and soone after my child, my cow, or my pullet died, or was strangelie taken.

Witchcraft beliefs were deeply embedded in early modern societies among both demonologists in priestly and courtly circles and in the rural and urban masses. They reflect a world radically different from ours, although vestiges of it live on in conservative Christian circles still.

It was a world of ever-present “natural” disasters, both collective and individual - events like the death of a child, the lameness of a pedlar, a wife’s madness, a child’s frightening tantrum, the death of livestock, fires, floods and famine.

In the early modern period, the distinction between the natural and the supernatural was anything but clear.

Elements of the natural world were closely interwoven with reports of supernatural experiences — the appearance of a spectre, talking animal spirits, sex with the Devil, a corpse bleeding in the presence of its murdering witch, levitating children and flying witches, ghosts and goblins, and a punishing God. In the witchcraft persecutions, the natural and the supernatural worlds clashed in reckoning. 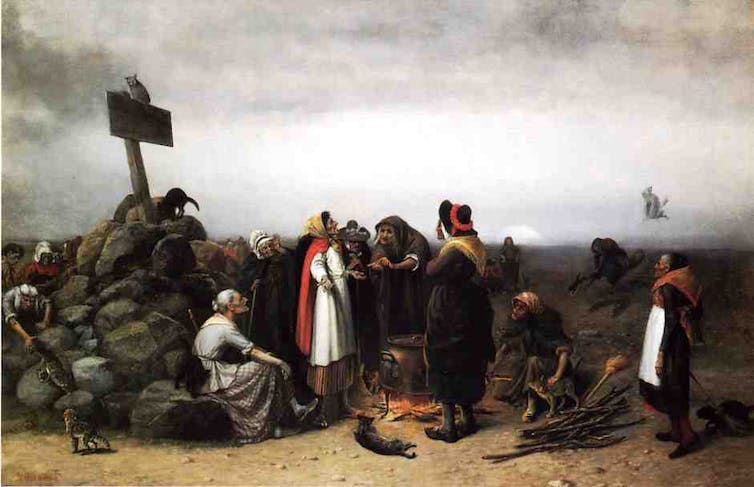 Historians take seriously the persecution, torturing, and executions of innocent men and women for crimes that they could not have committed in an enchanted world most of us no longer believe in. Their deaths were among the darkest historical moments in Western civilisation.

It borders on the ludicrous to hear the US President, touted as the most powerful man in the world, complain of being persecuted like a witch. The deaths of those convicted of witchcraft should not be demeaned and belittled by irresponsible, inaccurate, and plainly ignorant statements.