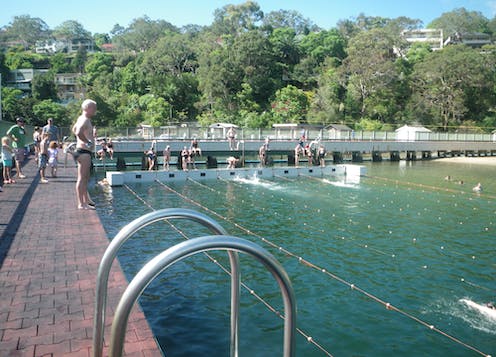 From the smell of chlorine to water bombing and a mixing of cultures – just some of reminiscences of 28 Australians in the book, The Memory Pool: Australian stories of summer, sun and swimming compiled by Therese Spruhan. 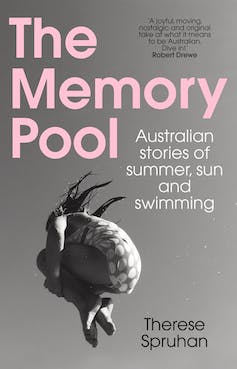 From the smell of chlorine to water bombing and a mixing of cultures – just some of reminiscences of 28 Australians in the book, The Memory Pool: Australian stories of summer, sun and swimming compiled by Therese Spruhan.

NewSouth Books Contributors include star swimmers (Shane Gould, Priya Cooper, Daniel Kowalski), actors and comedians (Leah Purcell, Bryan Brown and Merrick Watts), and many others who, though less well known, have cracking stories to tell about their ocean, bay or inland “memory pools”. Collections like this fly or falter on the quality and originality of the stories. Although some of these are rather matter of fact in the telling, there are some compelling stories here and some wonderfully evocative writing. Spruhan’s own piece (Embracing the Glorious Kingtide) is lovely, and Watts (Disneyland in Broken Hill), Brown’s (Bumping into Life at Bankstown Baths) and Purcell’s (Dancing in the Water at Murgon) contributions are stand-outs: funny, place-rich and poignant. Read more: What lies beneath: the bugs lurking in your swimming pool The outdoor municipal pool is often seen by wild swimming enthusiasts as an impoverished experience. They might be taken aback by Purcell’s joy in the magical combination of “chlorine and hot chips!” or Brown’s declaration that “one of the greatest things about the Bankstown baths was the smell of chlorine”. But they would likely find familiar Brown’s observation the pool was “a place of enormous life” where “you worked things out yourself and learned about friendship and loyalty”. 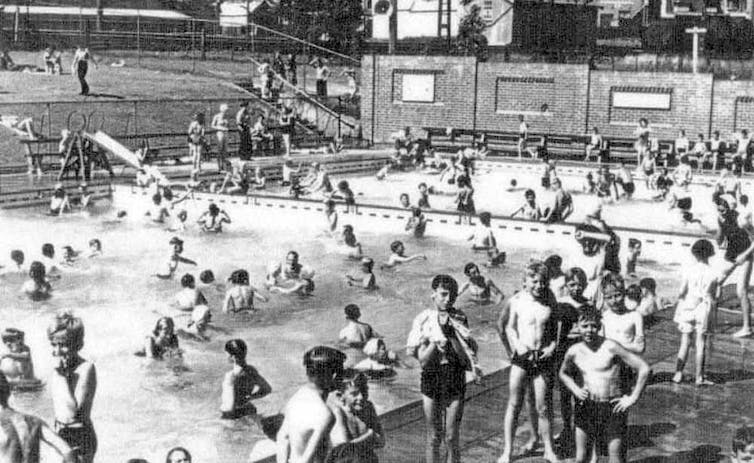 People swimming at the Bankstown public baths to beat Australia’s baking summer heat. City of Canterbury Bankstown council Similarly, Trent Dalton remembers growing up with Sandgate pool: […] a massive dugout filled with chlorinated water but what made it magical was you could do so much within it. He recalls bombing competitions, stunts, parading, mingling, escaping parental scrutiny and, as he says, “getting into deeper water” with girls, cigarettes, booze and wagging school. Some clouded memories Despite the different environments, from ocean to paddock, as these adults look back on their experiences, there are common threads in their remembrances. An often-repeated claim is that pools are a democratic, egalitarian space of inclusion in which all comers are welcome. It’s pretty easy to demonstrate this is not historically true. The 1965 Freedom Ride that exposed the exclusion of Aboriginal children from the Moree Pool is just the most famous example. 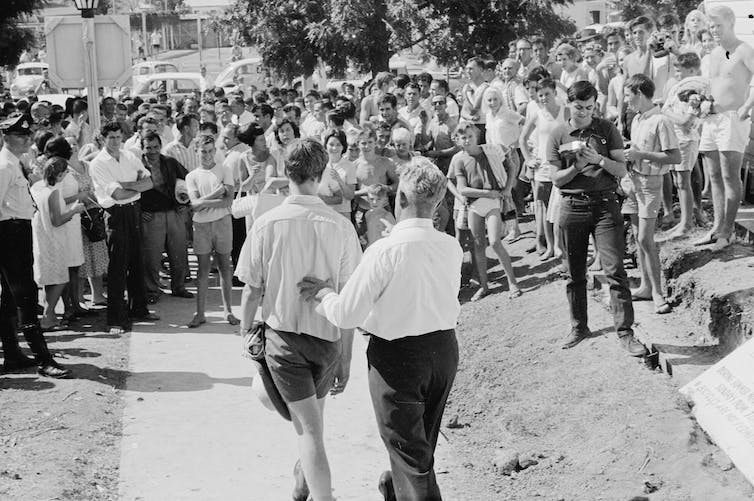 The then Moree Mayor Alderman William Loyd escorts protesters away from the Moree swimming pool in 1965. Flickr/State Library of New South Wales Body shaming, racism, other forms of bullying, prohibitive entry charges, and limits imposed by physical design have compromised the access to pools and the pleasure of some people and groups. What this collection shows, though, is that it is not a simple either/or. One of the unexpected and really interesting aspects of some recollections in The Memory Pool is demonstration of how fluid the dynamics of inclusion and exclusion at pools can be. Purcell recalls: […] a few glances from some of the white mothers thinking, We’re in the same water as them, but looking back, the pool was the only place in town that it seemed okay for everyone to be just doing their stuff. In a similar vein, there is nuance in Watts’ memories of South Broken Hill pool where he first met Aboriginal kids: At the pool they just played like the rest of us and we played with them, and we didn’t give it any thought. I do remember a sense of separation though, but […] in that space people couldn’t afford to be bigoted or cruel for a minute, it was simply too hot. In these lively fragments of swimming pool histories readers can glimpse the ways that “bumping into life” through pools can be abrasive and tough but also spiritedly expansive and hopeful. Yusra Metwally is founder of Swim Sisters, a swimming support and training group for mainly, but not only, Muslim women. She shares fond memories of the “very lively and inclusive” Greenacre pool. But then there’s a bad experience at Homebush Olympic Park where a lifeguard told her off for wearing a non-lycra top that gave her the “feeling of not being welcome at public pools”. And now we read of her enjoyment in, among other swimming experiences, the freedom afforded by Auburn Ruth Everuss Aquatic Centre’s women-only swim sessions. Mick Thomas also nicely captures the sharing-space vibe of ethnic diversity of Geelong’s Eastern beach. 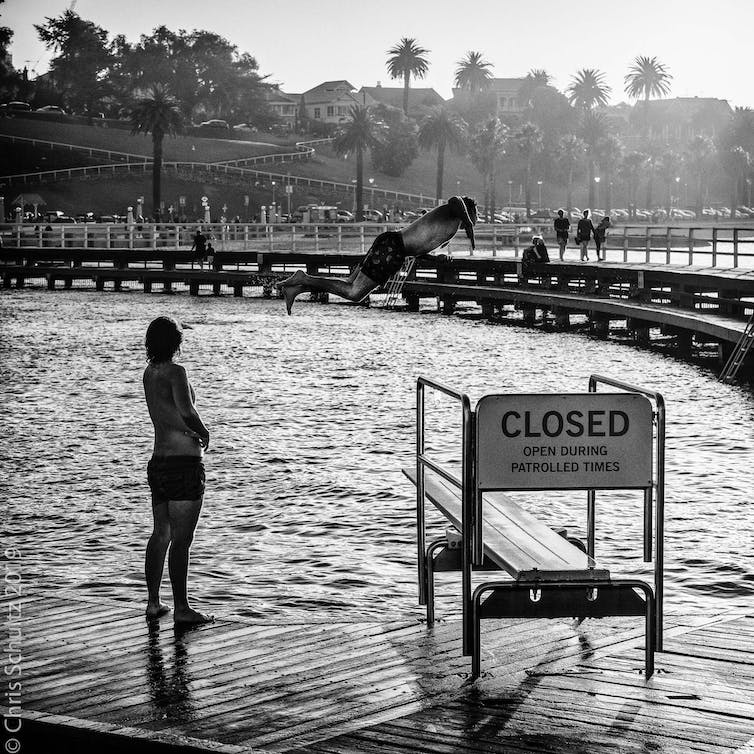 Closed dive, Eastern Beach, Geelong, 2019. Chris (a.k.a. MoiVous)/flickr, CC BY-NC-ND The community spirit Whether they are in oceans, towns or paddocks, pools take up much more space than an area map would suggest. As Ellen O’Connor’s account of Saving Fitzroy Pool demonstrates, faced with pool closures, communities resist a lot more than the loss of facilities. Pools are not only for the community, but also of the community. Many pools have been fund-raised and even physically built by local communities. Lily Sisa’s delightful narration of Dreaming Big in Lightning Ridge describes the community campaign for a pool and the initiative of the “committee of five girls aged between nine and 12”. It’s a fabulous story of cake-stalls, raffles, donated labour, media campaigns, a button-holed prime minister, of Gary Stone a local opal miner with big machines who dug the hole, and “Lightning Les who made things of foam and steel”. Putting environmental questions to one side, I was completely captive to the explosive imagination of Kim Mettam’s grandfather who, near Trigg Island Beach in Perth saw an “extensive limestone reef”. But he also saw the possibility of an enclosed swimming area safely holding sea creatures and humans and a “soft sandy beach” (the latter involving summers of grandkids moving rocks). 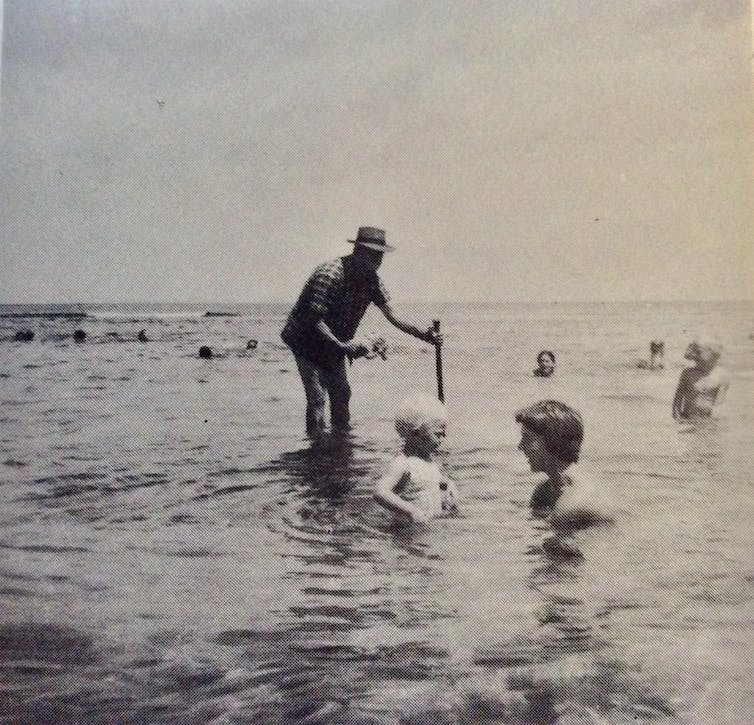 Kim Mettam’s grandfather with his crowbar at Mettam’s Pool. Therese Spruhan Mettam’s Pool involved 35 years of work and quite a lot of explosives. Now, it gets 4½ stars on Trip Advisor. Read more: Community pool projects show how citizens are helping to build cities Another piece that is simultaneously a story of building a pool and building community, is that of Lee Fontanini’s about her grandfather Archimedes Fontanini. After clearing a swamp, Archie built a dam. Then, pressed by locals, and with his wife Lucy, he converted the dam into a public pool with diving board, flowers, refreshments, and trout. It’s another reminder that ethnic diversity is not just a policy goal for contemporary pools, it’s also a poorly recognised component of Australian pool histories and cultures. Fans of outdoor swimming, in both wild places and public pools, will enjoy The Memory Pool. But there is also something here for non-swimming readers interested in the small stories of ordinary people, about community, migration, class, family, making a life, and how we have and might live together in multicultural Australia.