Belief in the virgin birth comes from the Gospels of Matthew and Luke. Their birth stories are different, but both present Mary as a virgin when she became pregnant with Jesus. Mary and Joseph begin their sexual relationship following Jesus’ birth, and so Jesus has brothers and sisters.

Catholic piety goes beyond this, with Mary depicted as a virgin not only before but also during and after Jesus’ birth, her hymen miraculously restored. The brothers and sisters of Jesus are seen as either cousins or children of Joseph by an earlier marriage.

In Catholicism, Mary remains a virgin throughout her married life. This view arises not from the New Testament but from an apocryphal Gospel in the second century, the “Protoevangelium of James”, which affirms Mary’s perpetual virginity.

From the second century onwards, Christians saw virginity as an ideal, an alternative to marriage and children. Mary was seen to exemplify this choice, along with Jesus and the apostle Paul. It accorded with the surrounding culture where Greek philosophers, male and female, tried to live a simple life without attachment to family or possessions. 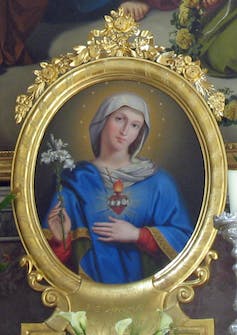 This extolling of virginity, however unlikely when applied to Mary, did have some advantages. The option of becoming a celibate nun in community with other women gave young women in the early church an attractive alternative to marriage, in a culture where marriages were generally arranged and death in childbirth was common.

Yet belief in the eternal virginity of Mary has also inflicted damage over the centuries, particularly on women. It has distorted the character of Mary, turning her into a submissive, dependent creature, without threat to patriarchal structures.

She is divorced from the lives of real women who can never attain her sexless motherhood or her unsullied “purity”.

Yet in the Gospels, Mary is a vibrant figure: strong-minded and courageous, a leader in the community of faith. 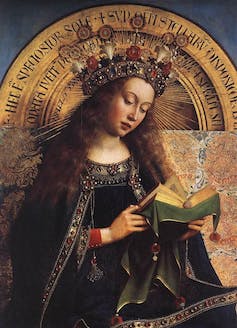 As the first Christian, Mary proclaims a radical message of social justice, where the poor are exalted and the powerful overthrown. She initiates Jesus’ ministry at the wedding of Cana and follows him to the cross, despite the dangers. She is a vital presence at the birth of the church at Pentecost, sharing the divine vision of a world transformed.

In line with the New Testament, the early church also gave Mary the title of “God-bearer” (Theotokos), which became part of Christian orthodoxy, not tied to her perpetual virginity.

Material art portrayed her in some contexts as a priestly figure (as in an 11th century mosaic from Ravenna), with her own autonomy and authority, where she embodies the symbolic vocation of all Christians to “give birth” to the transforming presence of Christ.

In contrast to these powerful images, the alternative picture of Mary, the perpetual-married-virgin, deprives women of a model not only of leadership and courage, but also of sexual desire and passion. 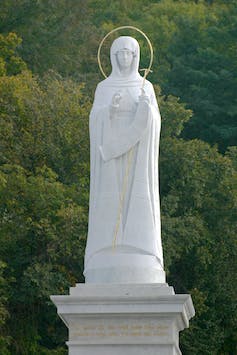 Mary has been put on a pedestal, symbolically and literally. Wikimedia Commons

Simone de Beauvoir, the influential, early French feminist, observed that the cult of the Virgin Mary represented the “supreme victory of masculinity”, implying that it served the interests of men rather than women.

The ever-Virgin diminishes women’s sexuality and makes the female body and female sexuality seem unwholesome, impure. She is a safe and nonthreatening figure for celibate men who place her on a pedestal, both literally and metaphorically.

It is true that Catholic women across the world have found great solace in the compassionate figure of Mary, especially against images of a very masculine, judgmental God, and the brutality of political and religious hierarchy.

But for this women have paid a price, in their exclusion from leadership. Mary’s voice has been permitted, in filtered tones, to ring out across the church, but real women’s voices are silent.

In today’s context, the cult of the Virgin becomes emblematic of the way the church silences women and marginalises their experience.

Marian piety in its traditional form has a deep contradiction at its heart. In a speech in 2014, Pope Francis said, “The model of maternity for the Church is the Virgin Mary” who “in the fullness of time conceived through the Holy Spirit and gave birth to the Son of God.” 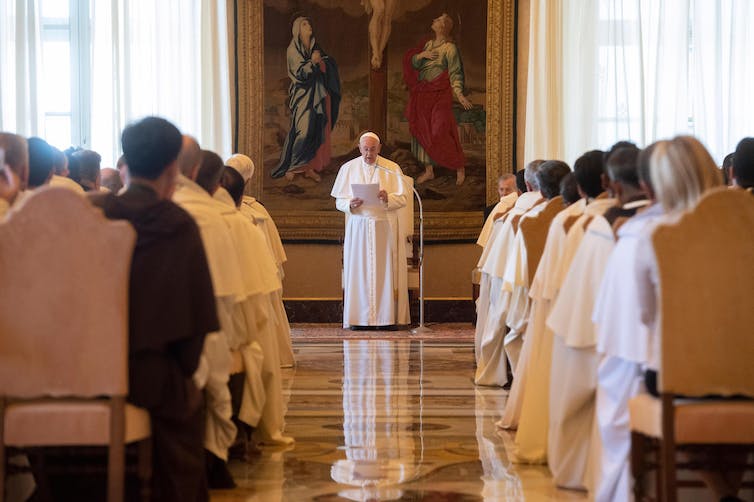 Pope Francis attends an audience with the participants in the General Chapter of the Order of Friars of the Blessed Virgin Mary of Mount Carmel (Carmelites), Vatican City, in September. Vatican Media/AAP

If that were true, women could be ordained, since their connection to Mary would allow them, like her, to represent the church. If the world received the body of Christ from this woman, Mary, then women today should not be excluded from giving the body of Christ, as priests, to the faithful at Mass.

The Virgin cult cuts women off from the full, human reality of Mary, and so from full participation in the life of the church. 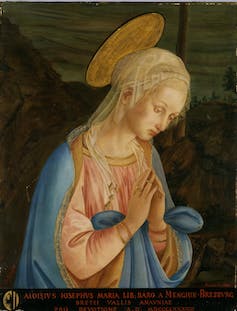 It is no coincidence that in the early 20th century, the Vatican forbade Mary to be depicted in priestly vestments. She could only ever be presented as the unattainable virgin-mother: never as leader, and never as a fully embodied woman in her own right.

The irony of this should not be lost. A fully human Gospel symbol of female authority, autonomy, and the capacity to envision a transformed world becomes a tool of patriarchy.

By contrast, the Mary of the Gospels, the God-bearer and priestly figure - a normal wife and mother of children - confirms women in their embodied humanity and supports their efforts to challenge unjust structures, both within and outside the church.