So for all the talk of narrowing polls, tactical voting, and possible shocks leading to a hung parliament, Boris Johnson achieved a crushing victory over Jeremy Corbyn and the Labour Party in the UK’s general election of 2019. With an 80 or so seat majority in the House of Commons, Johnson can now deliver on his core promise to “get Brexit done”.

He can also shape the broader social and economic environment in tune with the instincts of those around him. They are, almost to a man and a woman, hard-right libertarian figures with a barely concealed contempt for the welfare state, the National Health Service, social benefits and all the other elements that compose the post-war consensus.

One of the tricks Johnson managed to pull off in this election was to paint himself as a saviour of public services, and and a leader untarnished by ten years of Tory austerity policies. The British public is in for a rude awakening when it finds out Johnson’s brand of rambling One Nation populism was a cover for a much tougher and more conservative agenda than many voters realise.

So the puzzle that many commentators are trying to figure out is how it is that a right wing figure of this kind could get one over on Corbyn who pitched his entire campaign on the promise to protect the health service and promote public ownership of key sectors such as the railways and the post office?

What became clear as the night unfolded is that former Labour constituencies in the Midlands and the north of the country have been, and still are, in favour of Brexit. Johnson promised to get Brexit done, and Labour did not. For much of the electorate, this was enough of a reason to cross well established political divides and tribal loyalties.

But it’s also clear that many voters didn’t trust Jeremy Corbyn. They saw him as too beholden to sectional interests, too evasive, too metropolitan and too left wing. Johnson, by contrast, came across as a capable if lovably bumbling figure who was able to articulate not only a clear line on Brexit, but also to distance himself from the legacy of destructive Tory policies. In the end it was Corbyn, not Johnson, who proved to be political Vegemite.

This proved a winning formula across England and most of Wales. But elsewhere, the story was rather different. In Scotland, the Nationalists improved their result from 2017, often at the expense of the Liberal Democrats, and indeed the latter’s leader Jo Swinson, who lost her seat to the Scottish National Party (SNP).

This sets up an important byline for 2020 which is the matter of Scottish independence. With Brexit now almost certain to go forward at the end of January 2020, the pressure will immediately mount to allow Scotland to have another independence vote on the back of the SNP’s crushing performance. 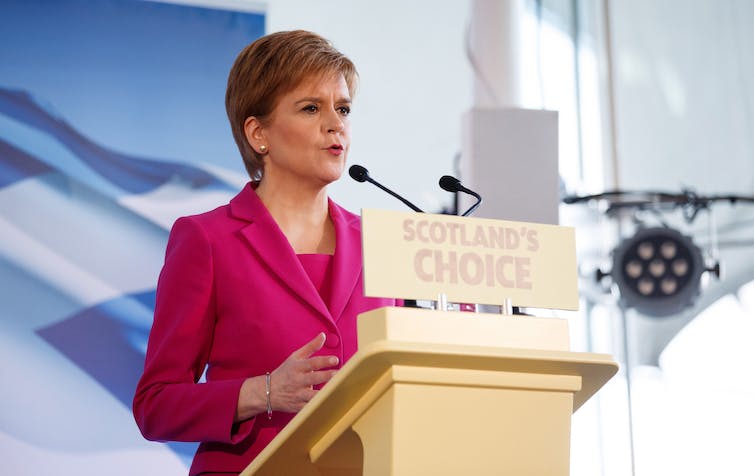 The Scottish National Party’s strong performance, led by Nicola Sturgeon, will lead to a push for independence vote. AAP/EPA/Robert Perry

While the picture is less clear in Northern Ireland, the overall trend was towards increased support for the nationalist parties at the expense in particular of the Democratic Unionist Party, which similarly lost its parliamentary leader Nigel Dodds.

While the dynamics in Northern Ireland are quite different from those of Scotland, the realisation that Brexit will now take place is bound to provoke a sustained debate on the need for a border poll on the future of Northern Ireland itself. This may take some years to resolve, but the line of travel is becoming clearer, and it points towards the reunification of Ireland. Johnson’s triumph may thus herald the break-up of the UK – to be greeted, it seems, by English indifference.

But the clearest takeaway remains the state of progressive politics in the UK. The centrist Liberal Democrat party had a very bad election. The Green party managed to increase its share of the vote but only managed to win one seat. The Labour Party was sent packing in many of its traditional working class heartlands in the North.

As long as progressive and left politics is spread amongst these various parties, it seems unlikely that we can expect a recovery any time soon, certainly as far as electoral politics is concerned. The Labour Party will now hunker down to decide whether it is going to row back towards the centre under a leader such as Kier Starmer, or whether it is going to maintain the more radical position associated with Corbyn, McDonnell and the Momentum faction that now dominates many local constituency parties.

With the victory of Johnson demonstrating the importance of a charismatic and effective leader, attention will turn to the next generation of Labour politicians. It is difficult at this juncture to be confident there is a serious challenger waiting in the wings of the current Labour Party who can provide an effective counterpoint to the ebullient Johnson. But it must. More of the same will not turn the tide.

The right does not have a monopoly on effective communicators and charismatic leaders. But what it does have is a keener appreciation of the dynamics of the moment: that policies do not sell themselves; they have to be sold by someone who has an ability to connect, to articulate a position that voters feel comfortable with, and which chimes with their own experience, values, hopes and fears.

Some call this populism. But the reality is simpler: this is - and always has been – the formula for winning elections. It’s a formula the left would do well to memorise.