Education news in Australia last week was dominated by Australia’s worst ever showing in the OECD’s PISA (Programme for International Student Assessment) tests. The mathematical literacy of our students has fallen to the OECD average. It’s not good enough for a rich country like Australia.

Our government is providing record funding of $310.3 billion to schools. Money is not the issue because Estonia was the top-performing country in reading and science and they spend half as much money per student as Australia.

In fact, Estonia spends virtually the same per student as Australia, once wage differences are taken into account.

It’s not ‘half as much money per student’

Estonia’s performance in PISA 2018 was impressive. Although they weren’t “the top performing country”, they were one of them and did significantly better than Australia. But what about their funding?

According to the OECD’s Education at a Glance 2019 report, Estonia spends the equivalent of US$6,900 per student per year for both primary and secondary students, while Australia spends US$10,000 per primary student and US$11,650 per secondary student. 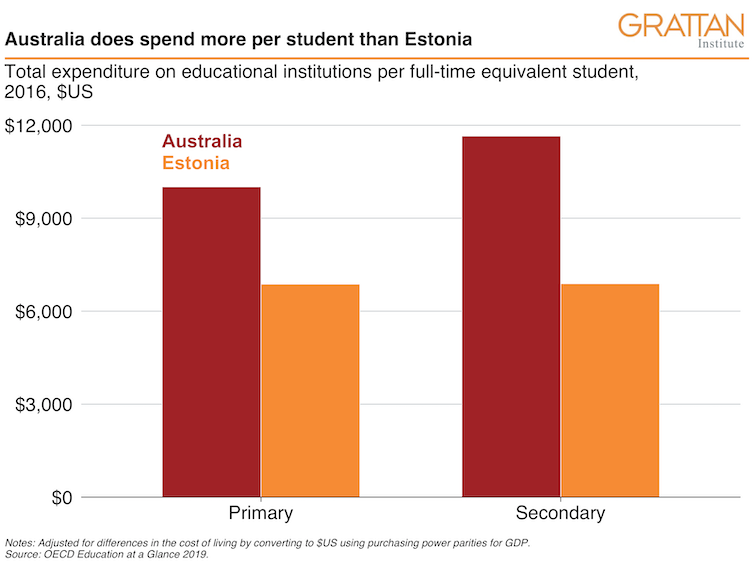 Estonia’s spend per student is around 60 to 70% that of Australia’s.

Leaving aside the fact 60-70% is quite a long way from half, the real problem with Tehan’s claim is that wages are very different in the two countries.

The starting wage for a secondary school teacher in Estonia, for instance, is US$22,200. In Australia, it’s exactly double that. Here’s why that matters.

Wages are higher in richer countries

Generally speaking, high wages reflect high labour productivity. But workers in rich countries still tend to be paid more even if they are no more productive than those in poorer countries.

Cost comparisons must adjust for differences in wages. And teacher wages are much higher in Australia than Estonia, because all wages are higher. 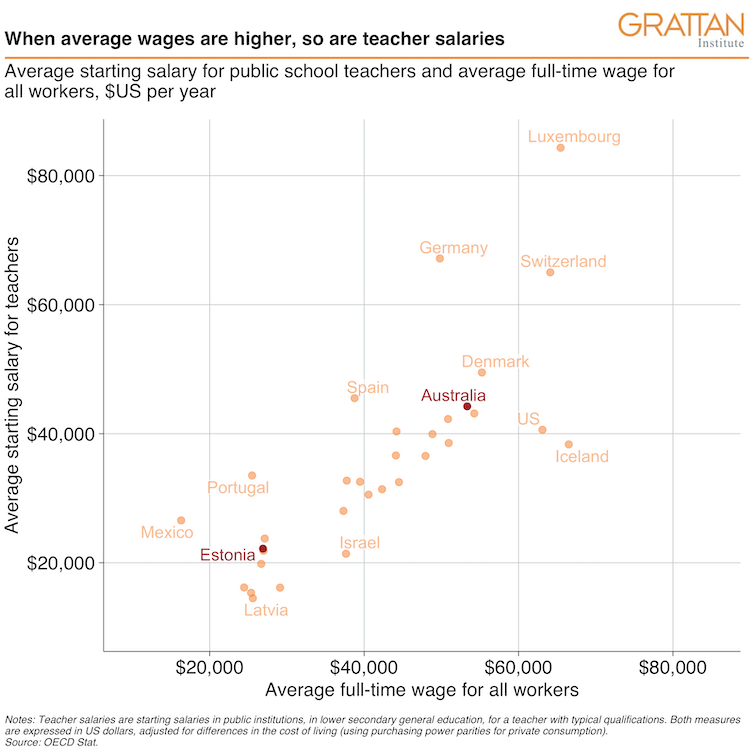 As average wages in a country rise, so do teachers’ wages.

Like other service professions, labour productivity in teaching probably doesn’t rise much over time. The number of students a teacher can teach in an hour, with a given quality of instruction, is pretty stable.

Yet as wages in other sectors rise, reflecting productivity growth, teacher wages must also rise to stop teachers from chasing bigger bucks elsewhere.

Put bluntly, teachers get paid more in Australia than Estonia because Australian teachers have better-paid alternatives.

And it’s not just teachers who get paid much less in Estonia. Converted into US dollars (and adjusted for costs), their prime minister gets paid around one-third what our prime minister does. 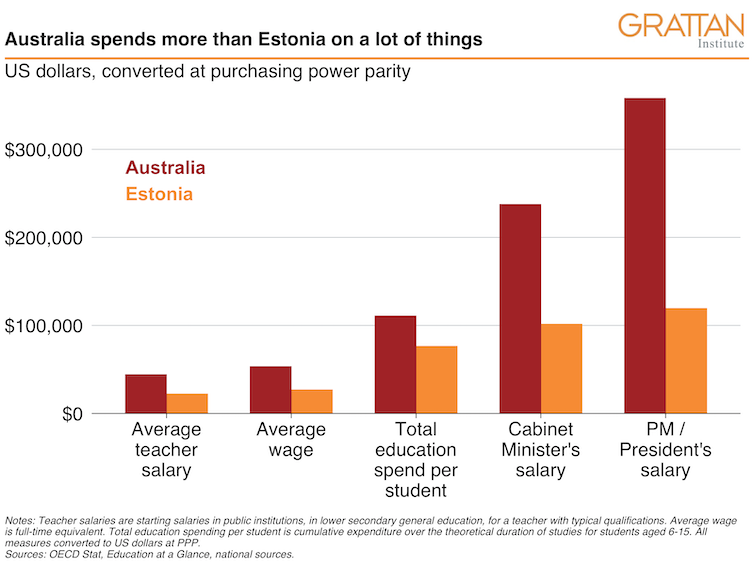 Australia’s wages are higher than those in Estonia.

Estonia spends the same as Australia on schools

Australia spends 3.9% of its GDP on school education, compared to Estonia’s 2.9%. But this statistic only tells part of the story, because one in six Australians are school-aged but only one in seven Estonians are.

The OECD does publish one metric that effectively takes account of both wages and demographics: the spend per student as a percentage of GDP per capita. 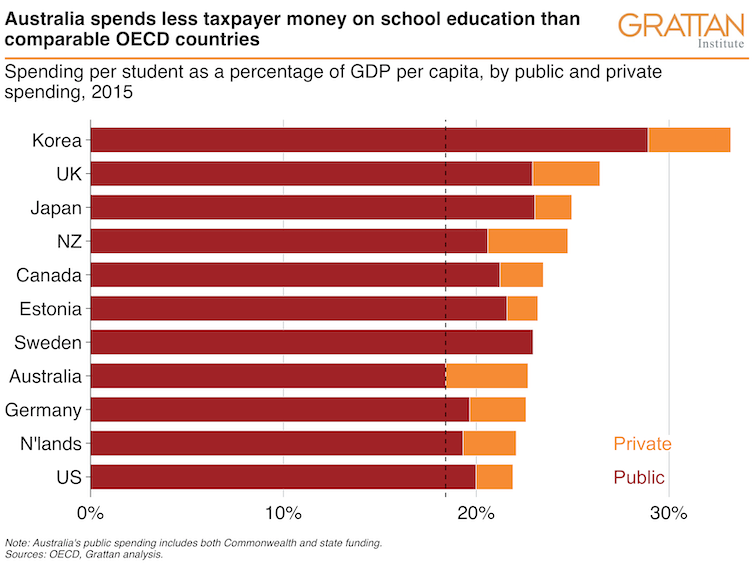 Private funding of school education is higher in Australia than Estonia, but much of this goes to sports ovals and arts centres, not teaching.

No. The nominal dollars spent each year on schools went up by A$21 billion in the decade to 2017, but mainly because wages and student numbers grew.

To see how much extra money schools actually received to teach their students, it’s necessary to adjust for wages and students. Having done this, the effective increase was closer to A$2 billion. And 80% of that money went to non-government schools.

Over the decade to 2017, government schools got just 1% more money for teaching students – a miserly A$15.50 per student per year. Think sandwich and milkshake, not specialist teachers or more support for students with disability. 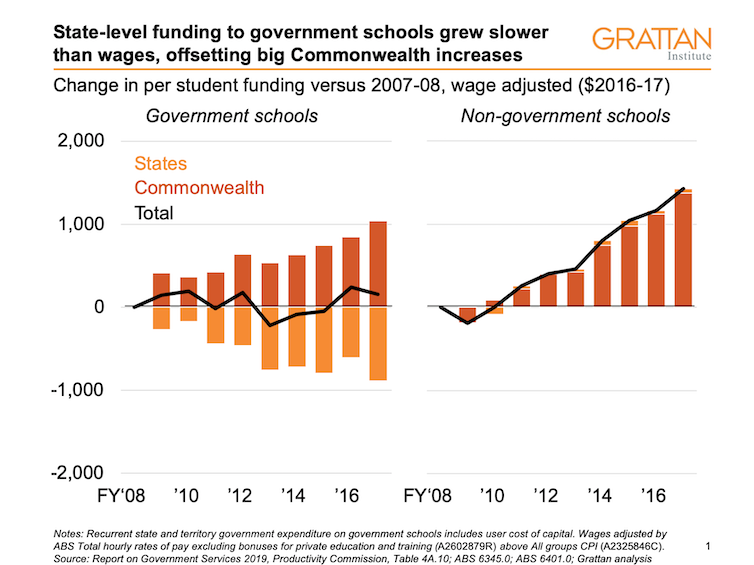 A big problem with how Australia funds our schools is that our best teachers are poorly paid compared to their peers in other careers. This pushes high achieving young people away from teaching.

Yet attracting talented young people into teaching and setting them up for success in the classroom is the best way to boost student results in the long run. The top-ranking education systems invest relentlessly in their teachers, and so should we.

Our recent report, “Attracting High Achievers into Teaching” showed Australia could transform its teaching workforce for just A$620 per student per year. This is one-third of the increase government schools would receive if they got their full “Gonski” allocation.

Most of the extra money would be used to create a structured career pathway to give expert teachers more time to support their peers. This proposal – which builds on recommendation 16 in David Gonski’s 2018 report on how to achieve excellence in Australia’s schools – is what education ministers should be discussing when they meet this week in Alice Springs.

Of course money is never the only answer. But investing in great teachers would pay for itself many times over, because a better-educated population would mean a more productive and prosperous Australia. And it might just be the key to reversing Australia’s PISA woes.