Netflix’s The Two Popes may be best described, borrowing a turn of phrase from Fredric Jameson, as “nostalgia for the present”.

Biopic and historical dramas are traditionally reserved for people who are dead, so I felt suspicious about watching a movie about two popes who are alive. It feels premature and slightly reminiscent of Barack Obama winning the Nobel Peace Prize less than a year into his presidency.

The Two Popes doesn’t seem to have an agenda to shape the present, but does gesture to a break in outlook of the papacy between Benedict XVI, whose papacy ended in February 2013, and Francis, our current pope.

The film’s director, Fernando Meirelles, is known for political films such as City of God and The Constant Gardener. Perhaps he was attracted to the subject given Francis’ reputation as a social justice warrior, who has long championed the plight of the poor and who as Pope has adopted enlightened positions on climate change, refugees, and even animal welfare.

The film’s script was penned by Anthony McCarten, known for his work on historical movies and biopics, most notably the Churchill drama Darkest Hour. McCarten adapted the screenplay from his own stage-play and the film is more than just a scenario with talking heads, utilising flashbacks and music to great effect. At one point we are treated to ABBA’s Dancing Queen being played during the papal enclave that resulted in Benedict being declared Pope in 2005.

The film predominately focuses on a conversation between Benedict and Francis before Benedict made the decision to retire in 2013, but also comprises flashbacks throughout Francis’ life. Structured around two distinctive personas, with Anthony Hopkins and Jonathan Pryce cast respectively as Benedict and Francis, it nevertheless lacks the dramatic pull of The King’s Speech or Darkest Hour.

We see that Benedict has made a mess of things, with mounting scandals, but we don’t see Francis actually setting right the problems of the Catholic Church’s finances or its horrifying issues of sexual abuse, partly because such endeavours are ongoing. In this respect, the film remains hostage to history, and narratively confined.

Nevertheless, there are engaging elements to it. Francis and Benedict are both shown as popes who live their philosophies (though when the film is set, Francis is not yet Francis but Jorge Bergoglio.) For Benedict (born Joseph Aloisius Ratzinger), God is the eternal truth but Bergoglio frames God as evolving.

Indeed, in an earlier scene, in the midst of Pope John Paul II’s death, Ratzinger is presented as imperious and rude toward Bergoglio. Bergoglio and Ratzinger were perceived rivals for the Papacy after John Paul II. Bergoglio laments Ratzinger’s hostility toward him, “No nice to see you ‘Jorge’.”

Hopkins plays Ratzinger with an icy coolness even before he becomes the Pope. On becoming Pope, his icy veneer begins to thaw, especially as we discover his inner torment and self-doubt. 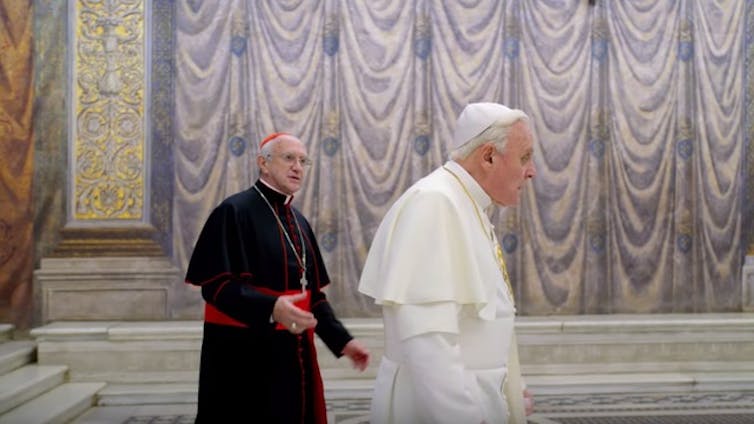 Anthony Hopkins and Jonathan Pryce in The Two Popes (2019) Netflix

When Benedict realises that he may not be the right figure to lead the church, he confides that he has trouble hearing God, “perhaps I need a spiritual hearing aide.” Such vulnerability engenders empathy and the silence of God has long been a theme of theological and existential contemplation. But it may also explain his perceived fanaticism.

Doubt and uncertainty produce a need to prove one’s faith, whereas Bergoglio’s confidence affords him the ability to take more moderate positions. In the end, they become friends and even share a pizza in a scene of viewer wish-fulfillment.

Crimes of the church

But historical adaptations are hard, especially when it comes to very recent history. The movie features Bergoglio expressing sadness, regret and guilt over his supposed complicity as head of the Jesuits when the military dictatorship in Argentina snatched two priests and tortured them.

Benedict, on the other hand, reminds him of his role rescuing, protecting and providing cover to those targeted by the regime. This framing allows Bergoglio to appear modest with Benedict counselling “you’re only human”. Yet in reality, Pope Francis has at times avoided scrutiny over questions of complicity. 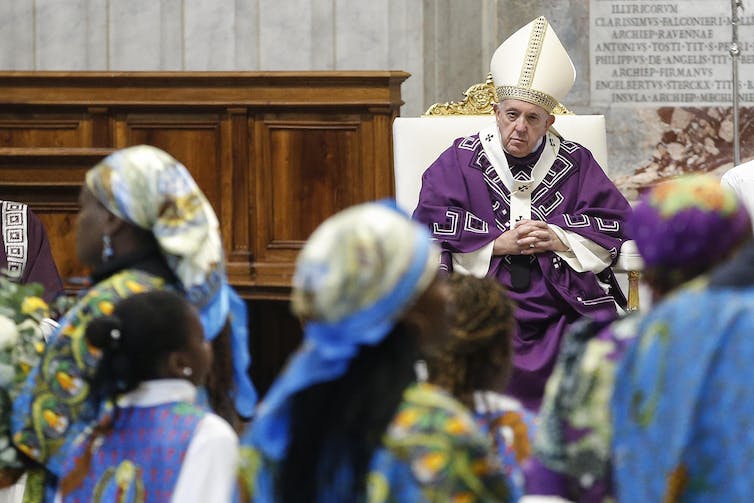 Pope Francis presides the Holy Mass for the Congolese Catholic Community of Rome in the St. Peter’s Basilica this week. EPA/Fabio Frustaci

Another issue with viewing The Two Popes is precisely the theological themes involved. The crimes of the church are immense and Bergoglio is shown pleading for Benedict to remain Pope, arguing that his suffering must be harnessed to heal the wounds of the collective trauma of child abuse.

Seeing the human side of church leadership arguably misdirects the sympathies of viewers. This suspicion is furthered by Bergoglio’s dialogue where he likens the Pope to a martyr and urges him to “be the personification of the crucified Christ.” Reflecting on the harm done to so many, one may well prefer an Old Testament approach to the guilty among the church.

The church on film

There is much about the church that could be fertile ground for filmmakers. A relic in the modern world, how the church adapts or doesn’t, the way it (mis)manages PR, and the disjunct between the earthly machinations of power within it and its higher purpose, could make for interesting viewing.

Paolo Sorrentino’s series The Young Pope proved particularly adept at picking up these themes; and I imagine its sequel The New Pope will similarly provide satisfying explorations.

Other films have also explored issues of the Papal burden of responsibility, such as Nanni Moretti’s We Have A Pope (2011), which revolves around a Cardinal elected to be Pope who, in a state of depression, tries to refuse the papacy.

In comparison, The Two Popes is a mixed bag, but the movie is worth watching for the bravura performances from Pryce and Hopkins. As an analysis of theological themes, the movie makes admirable overtures, as a psychological study it is interesting, but as historical and political commentary it remains unsatisfying.