The bushfires burning across Australia are having a devastating impact on our unique native wildlife.

But while record numbers of injured and orphaned animals are being treated, tens of thousands of people across Australia and from as far away as France and the Netherlands are responding to the animals’ plight by knitting, crocheting and sewing pouches to soothe and keep them warm and quiet when they come into care.

Their efforts are the latest in a long history of crafting in times of crisis.

Craft has long provided comfort to both creators and recipients. It has also shaped the fabric of our society.

More than 115 years ago, the suffragettes embroidered banners and cloths to display at their rallies for the right to vote. 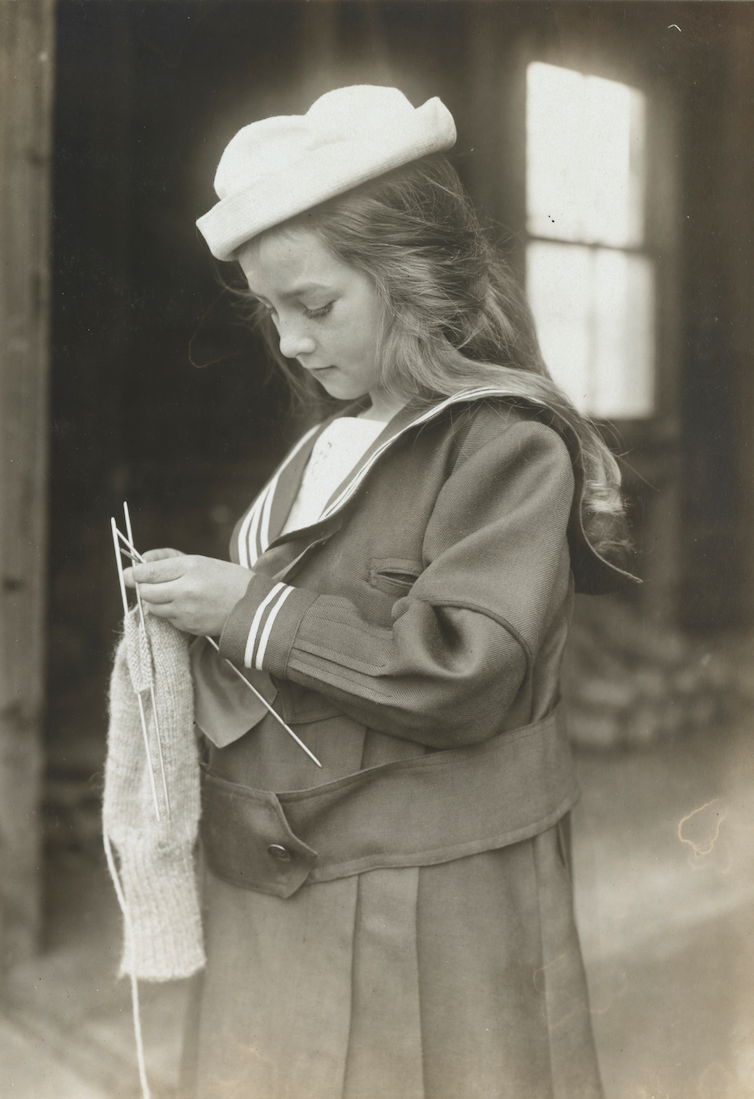 Knitting soldier comforts was seen as a way for those at home to do their bit in wartime. Photographer: Mrs. W. Durrant/Wikimedia

During World War I, thousands of Australian women and children knitted more than a million pairs of socks for soldiers serving in the trenches in France. The practice of crafting in a crisis continued into World War II with Australian government departments issuing knitting patterns and guidelines for suitable garments that soldiers could wear to war.

More recently, groups like the Knitting Nannas Against Gas have tapped into the history of using knitting as a tool for non-violent political activism.

Likewise, in 2017, the Women’s Electoral Lobby published the pussy hat knitting pattern in solidarity with women’s marches around the world. 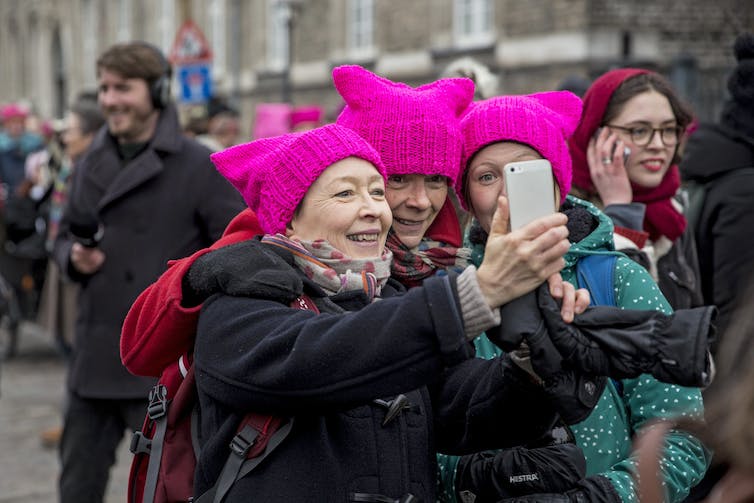 Women around the globe knitted ‘pussy hats’ as a bright visual signal of the need for recognition of equal rights. Nikolai Linares/EPA

Australia’s wildlife in need has a strong appeal for crafters.

Philip Island’s Knits for Nature project began after oil spills in the late 1990s and the early 2000s threatened the area’s penguins. Thousands of knitters worldwide rallied to support the cause and continue to donate. 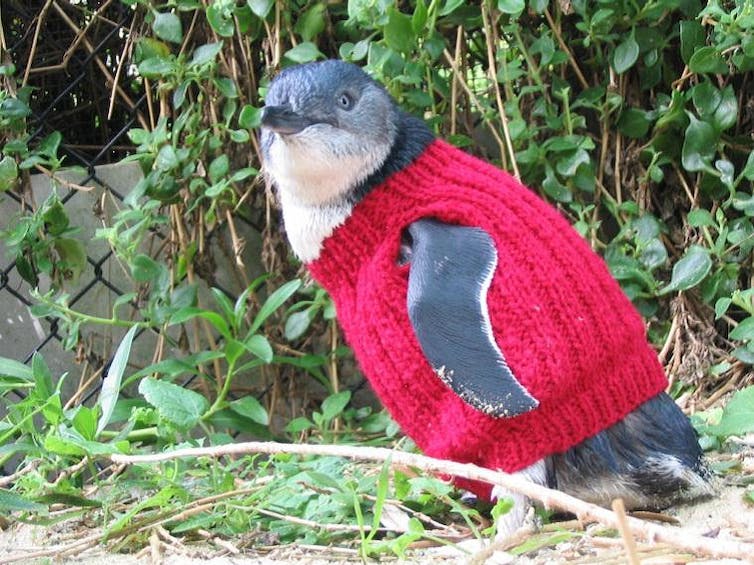 It’s spring, which is our busiest time of year. We’re getting many hundreds of calls each day about orphaned and injured wildlife because it’s breeding season, but so many of our resources have been taken up by the bushfire emergency.

Community members and organisations are mobilising to crochet and knit marsupial pouches, make pouches and linings for orphaned joeys or sew bat wraps. WIRES has received donations from Australia, NZ, UK, USA, Sweden, Norway and Japan and delivered hundreds of pouches to carers.

Sydney-based fibre artist Jacqui Fink is one person helping to co-ordinate donations of pouches and linings for wildlife welfare groups. She agrees with Newton that, “The fires are so huge and horrific that people are desperate to help as many animals as possible in any way they can”.

“Lots of school teachers have asked me to send patterns so that the kids can make pouches and linings. Church groups have been amazing, and even a women’s prison in South Australia has been in contact asking for information. I’ve received packages of pouches and linings from all over the Australia,” Fink says.

Newton also says that many schools have been in touch with WIRES for information about how to make pouches and the phone has been ringing off the hook with offers of help.

It is not just the local crafting community rallying around the cause.

“I’ve received more than 10,000 emails from as far away as Estonia, Finland, South Africa, Canada, Germany and New Zealand from people looking for patterns to make pouches to help our wildlife,” Fink notes. 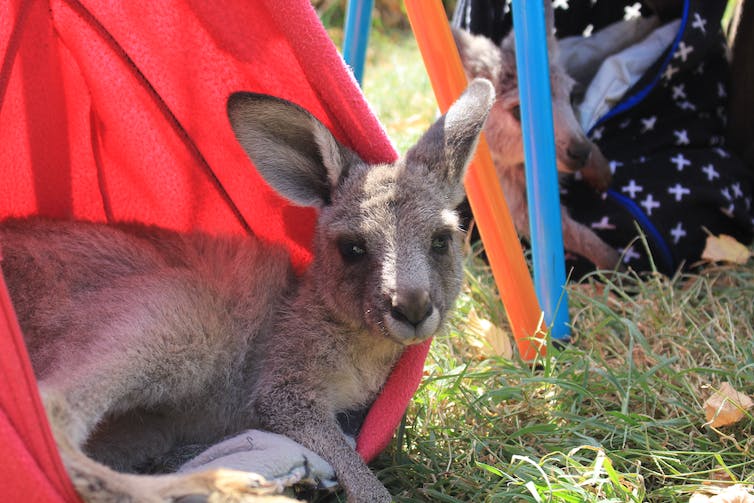 Sewing enthusiasts have responded to the call to help orphaned joeys with snug pouches. WIRES, Author provided (No reuse)

Making pouches and linings is a low-cost, sustainable way for people to help. As long as the pouches are made from pure wool and the linings are cotton or flannelette, they’ll meet the fabric requirements to keep the animals safe and snug.

“We crafters are a practical mob. We love a job and we often have huge stashes of fabric and yarn lying around the house,” Fink says.

Pouches and linings can also be made from woollen blankets and old cotton sheets, saving them from landfill.

People are often keen to get involved in crafting during a crisis because it gives them a sense of purpose.

There is evidence that the acts of knitting,crochet and sewing can all help people to feel less anxious and deal with traumatic events.

And although the scale of the Australian bushfires is overwhelming, making pouches for animals feels like a practical step.

“It’s a meaningful way to help and people can know that something they’ve made with their hands will keep an animal warm at night. That’s a beautiful gift to give,” Newton says.

Read more: How craft is good for our health

The pouch and lining patterns are so basic that it’s an opportunity to learn new skills and carry on traditional crafts. Crafting pouches and liners can also allow kids to focus on something positive.

Youth health nurse Debbie Downie from Kirwan State High School in Townsville organised for students and teachers to sew koala mittens at lunchtime. Parents and other local community members also got involved by donating fabric or coming in to sew with the children. They’ve now made more than 150 koala mittens for animals affected by the bushfires.

How to make a pouch for critters in need.

In a crisis, small acts of crafting can be among the most powerful.

“All those incredible volunteers on the frontline can feel so alone and frustrated, but rising up and rallying with craft lets them know that out there people care,” Fink says.

Newton agrees. “We’ve been overwhelmed by the kindness of people and it’s helping us keep going, now and into the future.”

In times of crisis, we can echo the wartime slogan: Keep calm and craft on.