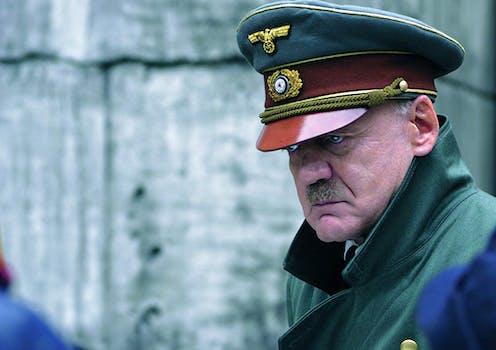 In September, the Fair Work commission rejected an unfair dismissal claim by a BP worker who made a Downfall video meme about his boss. Fair Work called it “inappropriate and offensive”.

Last week, the worker appealed Fair Work’s decision, saying the commission did not understand “the broader genre of Downfall video”.

Downfall video memes are online parodies of a bunker scene from a 2004 German film where a furious Hitler learns that his generals have let him down and the war is lost. Hitler loses it. He calls his soldiers “cowards, traitors and failures”, his veins popping with rage and spittle flying.

In the 15 years since the film’s release, the scene has taken on a life of its own. Downfall memes show “Hitler” raging about everything from cancelled exams to Twitter outages to election results, thanks to doctored subtitles.

In a robust online video culture that always hungers for the next Star Wars Kid how did an angry Hitler and this scene go viral – and stay viral – for so long?

Hitler finds out he didn’t get into Hogwarts.

The original Downfall (2004; Der Untergang in German) is a historical war film about Hitler’s final days, directed by Oliver Hirschbiegel.

When it was released, a good number of German film critics and reviewers thought the humanising of Hitler’s sieg-heiling rants in a bunker filled with SS rank-and-file goons was tasteless.

Some dismissed the bunker scene in particular as unnecessary in a film premiering 60 years after WWII ended. After all, they said: we already knew Hitler was a madman and that humans can be monsters.

This is where the internet went to work. A legion of keyboard warriors around the globe lifted the scene from the original film at the time studios and film festivals were using it widely to promote Downfall.

The parodies – and our reactions – show what happens when cultural items move from one context to another. It’s a tricky leap when it comes to a figure like Hitler. When you add the move from drama to comedy , it gets a whole lot trickier.

Read more: Explainer: what are memes?

Creative minds adapted Hitler’s German outrage. They copied and pasted, cut and inserted, and most importantly, they re-subtitled.

This readaptation is what makes video memes such a generative phenomenon.

A YouTube search for “Hitler Finds Out” or “Hitler Reacts To” yields thousands of videos. You’ll see how Hitler freaks out over global warming. He erupts when he hears about Donald Trump’s presidential bid and complains about the popularity of Pokemon Go. In one favourite he expresses fury that Christians are sending solar-powered bibles to Haiti.

‘Where the hell is my pizza?!’

The Downfall video meme has turned into a productive avenue for sociocultural commentary in each country and language it appears in, whether Chinese, Japanese or Spanish. Mostly, it gives voice to youth trends and blue-collar issues such as industrial action.

In the Fair Work unfair dismissal case, the scene was the medium via which an employee and his wife vented about his BP bosses during a drawn-out pay dispute.

Some international versions have packed political bite. One Malaysian parody refers to Abdullah Ahmad Badawi, who served as the Malaysian prime minister from 2003-2009. It has Hitler question Badawi’s turn to martial law and suppression of press freedom.

All this goes straight to the heart of the genre of Downfall video memes. Some are highly political while the vast majority turn on regional events, local slang and very limited in-group jokes. Taken together, they make a larger point about pop culture fads and stick-it-to-the-man sentiments.

Hitler wants a PS3 for Christmas but gets a Wii instead.

A meme that stuck

Some might argue that because the Downfall video memes appropriate a representation of a filmmaker’s Hitler instead of authentic archival footage, it’s acceptable to reuse the scene for comedy.

Others feel it is highly problematic to hide the real Nazi monster who orchestrated the systematic death of millions under layers of pixels and captions for laughs.

‘I’ll tell you what Chuck Norris is! If Chuck Norris gets shot today, tomorrow will be the bullet’s funeral!’

We need to have more conversations about what happens when cultures get adapted and sensitive topics in a nation’s history go viral.

The Downfall parodies have maintained cultural relevance for more than a decade, enduring far longer than most fleeting memes like Hey Girl or Dog Shaming posts. This is because they have become a fill-in form of sorts – an empty vessel for rageful rants. One may also argue that the original film was a dark-humoured parody of Hitler to begin with.

Lawyers for the sacked BP worker are not just arguing his bosses didn’t get the joke. They are saying Downfall memes do more than simply equate someone with Hitler. Rather, they connect to the hundreds of memes which came before to poke fun at something or to vent.

Whether it was appropriate for him to share the joke with colleagues will be up to the full bench that hears his appeal.

A very meta parody: Hitler finds out about the Downfall parodies.

The original film’s director approves of the meme by the way. Hirschbiegel said in a 2010 interview:

I think I’ve seen about 145 of them! Of course, I have to put the sound down when I watch. Many times the lines are so funny, I laugh out loud, and I’m laughing about the scene that I staged myself! You couldn’t get a better compliment as a director.