The Stuart Highway in the Northern Territory is dotted with around 300 termite mounds, dressed as people. They are reminiscent of giant, ochre coloured “snowmen” in their distinctly human forms of decoration.

These tall, colourful mounds variously sport scarves, caps, singlets, shirts, sunhats, bras, hard hats and even a beer can. They start just below Darwin, near the Noonamah Hotel, and occur all the way down to Kulgara, just north of the South Australian border. This covers around 1,800 kilometres. 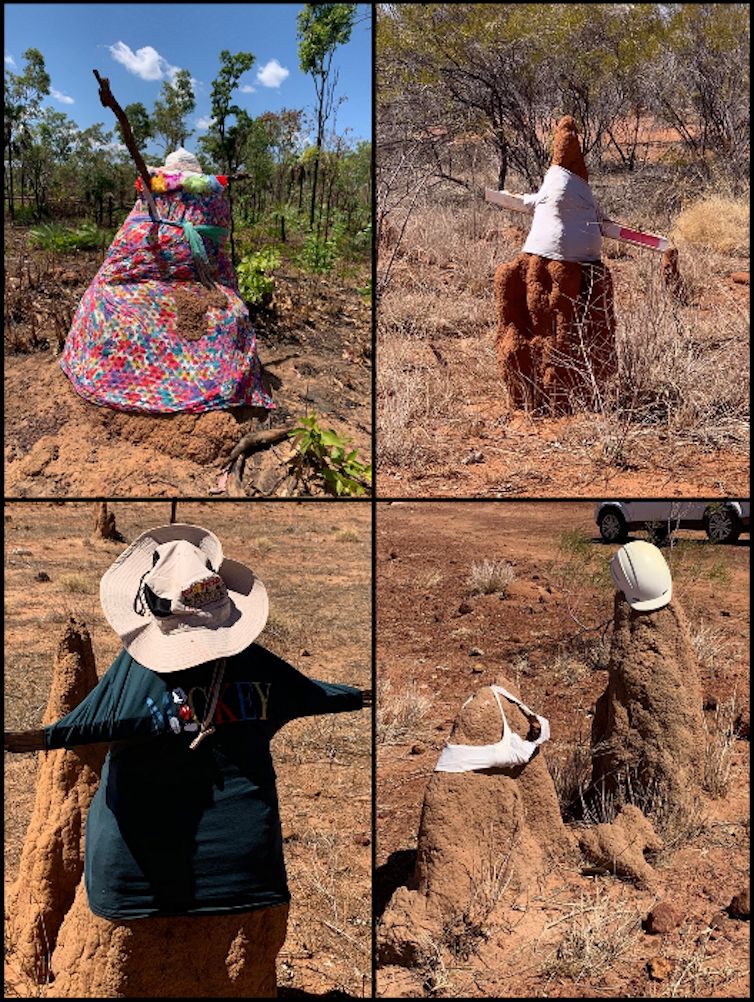 Different categories of people as depicted in the NT termite mounds. Author provided.

The snowmen are an irreverent, larrikin, Northern Territorian phenomenon. But who created them? And what can they teach us about fundamental human behaviours?

Termite mounds occur naturally. They are made of clay, soil, sand and other natural materials, bound together with the saliva of termites. They occur globally and can reach as high as five metres.

In the NT, the first snowmen appeared during the 1970s. More quickly followed. They appear on both public and private land, lining major highways and rural roads and extending into national parks. 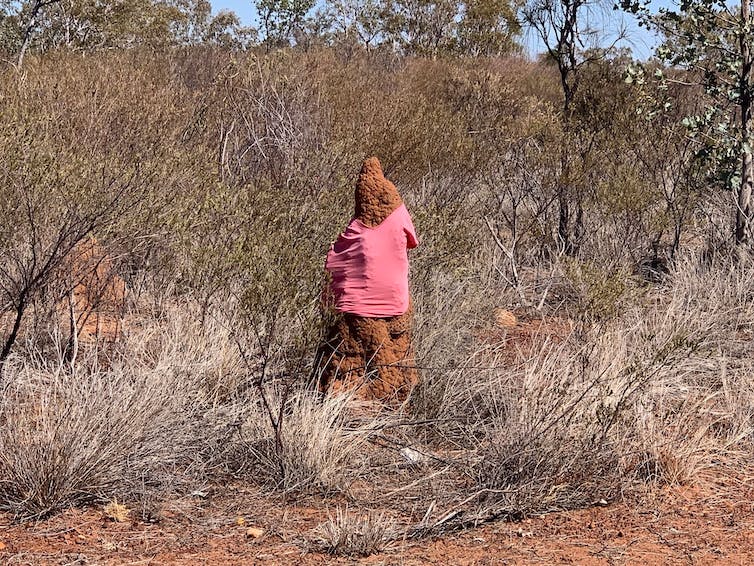 The snowmen are on both public and private land. Author provided.

Over the years, many people have made these snowmen. Some were made by roadworkers, staying at roadside camps along the highway, with limited access to towns and entertainment but plenty of work clothing. Some were made by the owners of rural and remote properties. Some were made by fisherman traversing to remote fishing locations. Some may have been decorated by tourists. 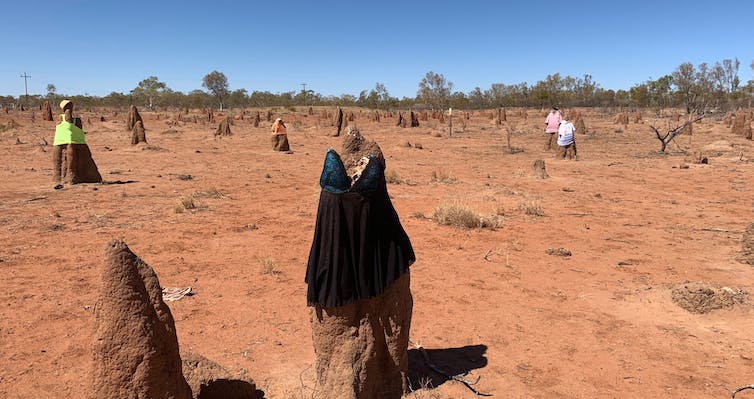 The first ‘snowmen’ appeared in the 1970s. Author provided

The manager of the Royal Flying Doctor Service Tourist Facility, Samantha Bennett, is a Territorian born and bred. She says of the mounds:

Sometimes the clothing is changed according to festive calenders. They don’t do Halloween, but they definitely do Christmas and Australia Day. They dress them up with flags and high viz clothing, which is cool because you can see them from a distance. Sometimes, they are used to help with directions. They mark the location of a driveway in a remote area or turnoffs to secret fishing spots.

The snowmen are actually snow people – men, women and children. Some are arranged in family groups. Gender is marked by clothing. Economic status can be discerned through the use of silk scarves, resort wear or hard hats. 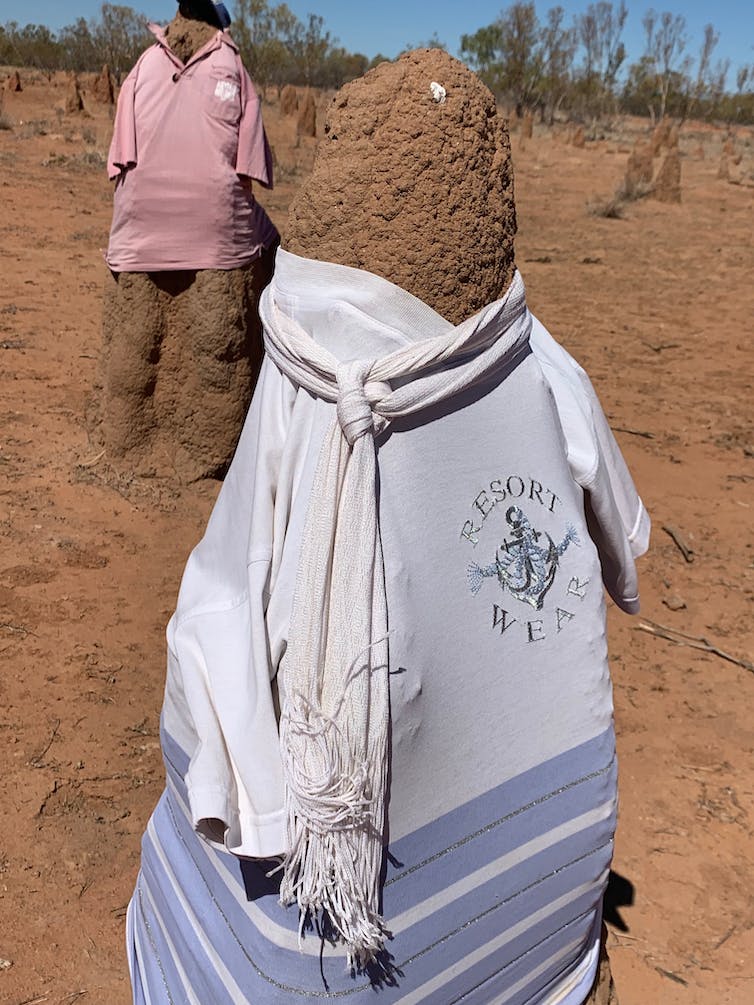 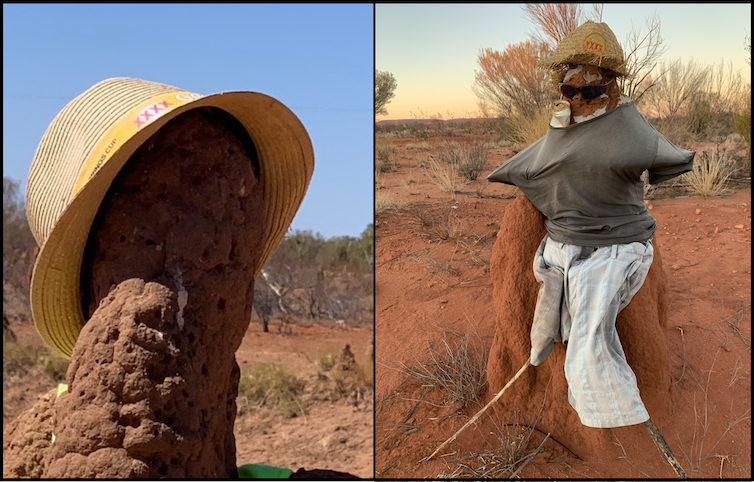 The snowmen are part of a wider cultural landscape in the NT. If you go to the Coburg Peninsula and lose one of your thongs, you put the remaining thong on the thong tree: a tree covered top to bottom with old rubber thongs.

Then there is the “fence of shame” on Andreas Avenue at Dundee Beach, west of Darwin. This is where you put your fishing rod if you have broken it during your trip. 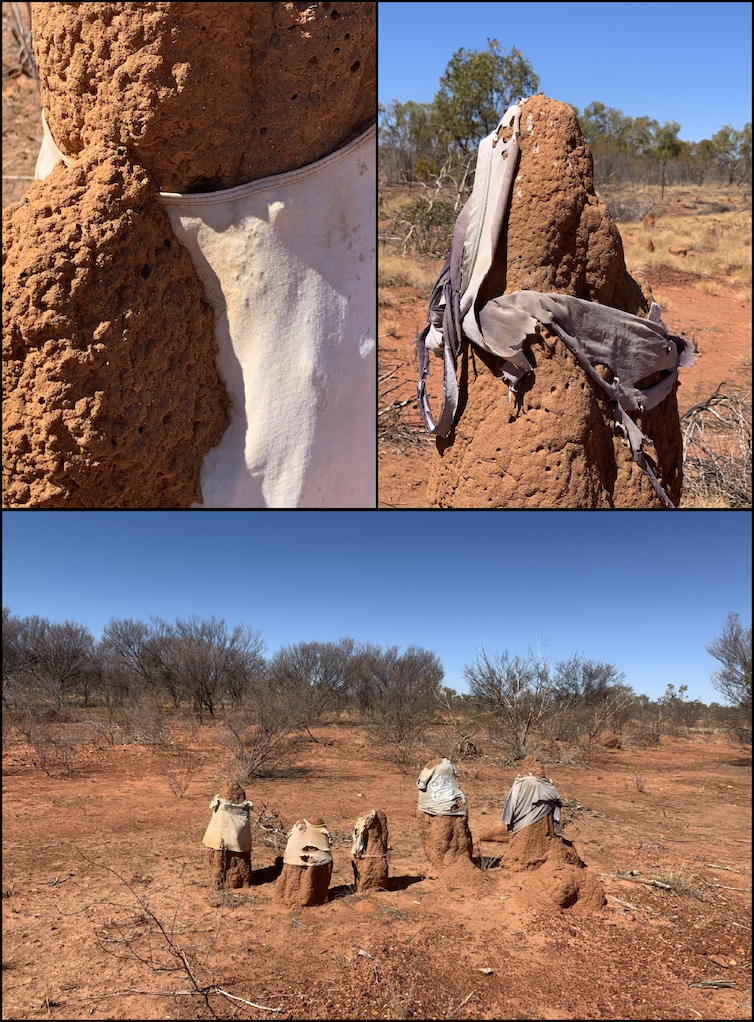 There is material evidence that the snowman tradition has some longevity. In some cases, the clothing is in a dilapidated state. In others, the termites have renewed their building efforts on top of the clothes.

It is unlikely that the snowmen were created by Aboriginal people. As Barunga resident Isaac Pamakal explains: “Aboriginal people don’t do that, because that might make people sick.”

Termite mounds are woven into NT Aboriginal belief systems. In some areas, there is a belief that anyone who knocks over a mound will get diarrhoea. Indeed, powerful Indigenous people have been known to put someone’s clothes onto a termite mound in order to make that person sick. The intended victim would be identified by the sweat on their clothing (which contains their DNA). (This link between sweat and DNA is an example of Indigenous science, which is increasingly being drawn on.)

However, termite mounds are mostly known, in the NT and around the world, for their medicinal properties. They contain high proportions of kaolin, used for the treatment of gastric-disorders in both traditional and modern pharmacologies.

The urge to humanise inanimate objects is a global phenomenon – through both time and space. For thousands of years, humans have had a penchant for making animals and things look like people.

This is most clearly shown in a style of rock art known as therianthropes, which depicts beings that have both human and animal characteristics. It also manifests in depictions of mermaids, centaurs and other mythical creatures.

So while they are special, the snowmen of the NT are not unique. They are simply another example of a human need to reinvent the world in our own image.