The long-awaited ALP campaign review says Labor lost “because of a weak strategy that could not adapt to the change in Liberal leadership, a cluttered policy agenda that looked risky and an unpopular leader”.

“No one of these shortcomings was decisive but in combination they explain the result,” says the report from former South Australian premier Jay Weatherill and former federal minister Craig Emerson.

While it says Labor’s big tax policies didn’t cause the defeat, the size and complexity of its spending plans “drove its tax policies” exposing it “to a Coalition attack that fuelled anxieties among insecure, low-income couples in outer-urban and regional Australia that Labor would crash the economy and risk their jobs”.

Labor failed to “craft a simple narrative” bringing together its policies, the reviews says.

Its analysis is damning while seeking to be positive for the future, at a time when the ALP remains in shock at its unexpected loss and divided and uncertain about the way forward.

Looking ahead, the report says “policies can be bold but should form part of a coherent Labor story, be limited in number and be easily explainable, making them less capable of misrepresentation”.

“Labor should position itself as a party of economic growth and job creation. Labor should adopt the language of inclusion, recognising the contribution of small and large businesses to economic prosperity, and abandon derogatory references to ‘the big end of town’.”

The report’s emphasis on the importance of Labor tapping into economic growth and being attuned to business reflects the direction in which Anthony Albanese has been seeking to take the party since becoming leader.

The criticism of the “big end of town” language is a direct slap at the rhetoric of Bill Shorten. 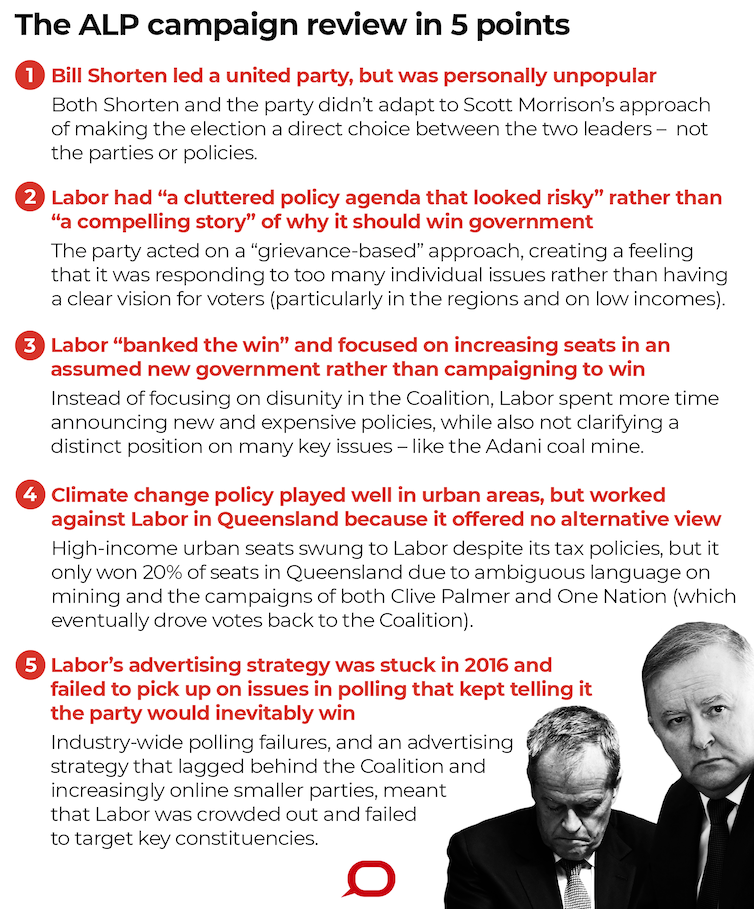 The Conversation, CC BY-ND Just ahead of the report’s release, Shorten said in a Thursday statement that “were the universe to grant reruns” he would have fewer campaign messages, put more emphasis on the opportunities provided by renewable energies, and take a different position on franking credits. He also said he should have promised bigger immediate tax cuts for working people. Shorten reiterated his intention to remain in politics for the next 20 years. The report warns that “care needs to be taken to avoid Labor becoming a grievance-based organisation,” saying it “has been increasingly mobilised to address the political grievances of a vast and disparate constituency”. “Working people experiencing economic dislocation caused by technological change will lose faith in Labor if they do not believe the party is responding to their needs, instead being preoccupied with issues not concerning them or that are actively against their interests. "A grievance-based approach can create a culture of moving from one issue to the next, formulating myriad policies in response to a broad range of concerns.” Addressing the swing against the ALP by low-income workers, the report says the party’s “ambiguous language on Adani, combined with some anti-coal rhetoric, devastated its support in the coal mining communities of regional Queensland and the Hunter Valley.” In contrast, higher-income urban voters worried about climate change moved to Labor, despite the potential impact on them of the opposition’s tax policies. Labor lost some Christian voters, “particularly devout, first-generation migrant Christians”, but the review does not find that people of faith in general deserted Labor. The review does not believe Labor’s values - “improving the job opportunities, security and conditions of working Australians, fairness, non-discrimination on the basis of race, religion and gender, and care for the environment” - were the problem at the election, and says Labor should retain its commitment to these values. “Labor’s policy formulation should be guided by the national interest, avoiding any perception of capture by special interest groups.” As a debate has raged within the ALP on how Labor should reshape its climate change policy, and notably its targets, the report says: “A modern Labor Party cannot neglect human-induced climate change. To do so would be environmentally irresponsible and a clear electoral liability. "Labor needs to increase public awareness of the costs of inaction on climate change, respect the role of workers in fossil fuel industries and support job opportunities in emissions-reducing industries while taking the pressure off electricity prices.” The report says that high expectations of victory caused Labor incorrectly to assume it had a stronger campaign machine and better digital capacity than the Coalition. It also led to “little consideration being given to querying Labor’s strategy and policy agenda”. Following Clive Palmer’s huge advertising blitz, the review urges caps on spending by high wealth individuals. Also, influenced by the scare campaign that wrongly asserted Labor had in mind a death tax, the review said the issue of truth in advertising should be looked at.