In her landmark 1975 essay, Visual Pleasure and Narrative Cinema, Laura Mulvey argues classical Hollywood style is built upon the fetishisation of the female body.

As the star-studded Hustlers struts across our screens, we can reflect on how strippers have been portrayed since the beginning of cinema and ask: is there anything left to take off? 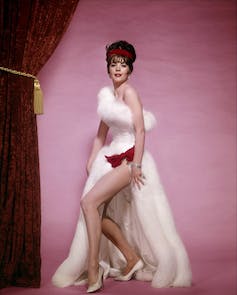 Natalie Wood in Gypsy, based on a Broadway hit about dancer Gypsy Rose Lee. IMDB 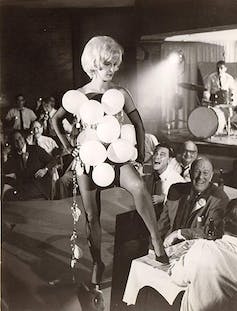 Joanne Woodward in The Stripper. IMDB

In the 1960s, two films established the standard stripper narrative – Gypsy (1962) and The Stripper (1963), which follow failed actresses stripping to survive.

Such films are moralistic to a fault, going to absurd lengths to prove the stripper is virtuous but driven to strip by extreme hardship.

Cassidy in The Wrestler – for which Marisa Tomei received an Oscar nomination – is a single mum. Erin (Demi Morre) in Striptease is toughing it through a custody battle. In Flashdance, one of the 1980s most stirring dance films, heroine Alex (Jennifer Beals) strips by night and welds by day, while she waits to audition for a classical ballet school. 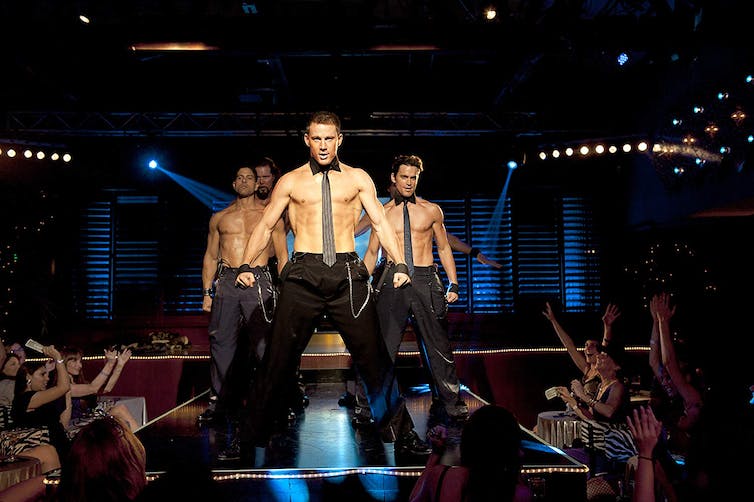 Things go off the rails a bit for Magic Mike but he’s portrayed as less desperate than female strippers on film. IMDB

Due to novelty – and the reverence with which women are supposed to treat sex in movieland – films featuring male strippers, like Magic Mike and The Full Monty focus more on the joys and pitfalls of performance than on a sense of desperation (though both these films maintain the “tough times” structure).

With his signature ice-cold craftiness, Verhoeven takes a functional approach to stripping, looking at it as a kind of sensory technology in a broader system of corporate American entertainment. Verhoeven manages to de-eroticise the film’s bountiful nudity. Ironically, this was one of the complaints critics had against the film, with Roger Ebert lamenting it “contains no true eroticism”.

Though panned by critics, Showgirls managed to de-eroticise stripping. IMDB

There is something detached about Verhoeven’s camera, and this side-stepping of any attempt at intimacy or empathy with the characters makes for a more interesting film than its stock-standard plot would suggest, involving a dancer trying to make it as a Vegas showgirl and stepping on the throats of colleagues along the way.

Lorene Scafaria’s acclaimed new film, Hustlers, focuses less on the morality of stripping, instead offering a satisfying heist movie in the context of the 2008 Global Financial Crisis.

Writer-director Scafaria says she hopes the film shows strippers in a new light, as athletes.

The stripping in the film is depicted as akin to other high-risk vocations, the strip club a place of precarious employment. When the GFC damages business, a group of savvy strippers begin ripping off rich businessmen. While it’s easy to read the plot in terms of gender – empowered women getting their own against predatory men – it’s equally effective as a kind of class critique.

Roselyn Keo, on whose life Hustlers is based, states her story has more in common with the Wolf of Wall Street than Flashdance. It’s no surprise the film has been popular: the combination of an outlandish true story with a cast dominated by celebrity pop stars effectively taps into the zeitgeist.

Art of the strip

There are many strip sequences in Hollywood films that are incidental to the main narrative (Pussycat Doll romps in Charlie’s Angels: Full Throttle, club hi-jinks in Beverley Hills Cop, Jamie Lee Curtis in True Lies, or Olive’s dance sequence in teen comedy Easy A).

One of the most legendary strip sequences in Hollywood history indeed does not involve a stripper, and contains no nudity. In Charles Vidor’s hard-boiled noir film Gilda, Rita Hayworth removes her black satin glove while lip-syncing Put the Blame on Mame.

As Mulvey writes, film is an erotically-charged medium, trading on our enjoyment of watching other people pretending they’re not being watched. The striptease simply offers an amplified version of that spectacular pleasure.