The Productivity Commission has revealed 3.9 million of us are living with mental illness, and it’s costing the country an estimated A$500 million per day.

The Commission, which the government tasked with looking at the impact of mental health on economic participation and productivity, has released its draft report today, ahead of a final report due in May next year.

Among a broad range of findings, it reports one million people with mental illness are not accessing services, 75% of people who have mental illness develop symptoms before they turn 25, and Aboriginal and Torres Strait Islander Australians are more than twice as likely as non-Indigenous Australians to be hospitalised due to mental illness and to die by suicide. The report then outlines five key areas for reform.

It’s the latest of a long line of inquiries into mental health in Australia. While previous reports have all identified widespread community dissatisfaction with the quality of mental health care, the need for continued inquiries shows none have managed to produce the required degree of reform.

Although this latest report makes promising recommendations to improve services and treatment, its approach to prevention needs to be strengthened if we’re to see any significant improvements to these statistics.

What’s different about this inquiry?

Unlike its predecessors, the Productivity Commission inquiry covers all levels of government and all sectors of the economy. It looks at broader social issues, whereas previous inquiries have had a narrower focus on the health system. This broader perspective is important because the causes of and solutions to mental illness extend far beyond the health sector.

The draft report in many ways lives up to expectations. It recognises improving the nation’s mental health requires action far beyond the health system, and recommends changes covering education, workplaces, housing and justice.

It also recognises that mental illness has its major impact in young people, in contrast to physical illness, where the burden is more concentrated later in life.

The draft report gives us the latest statistics on mental illness in Australia, and recommends a number of areas for reform.

The draft report recognises services need to focus on children and young people, and covers prevention and early intervention as a key area for reform.

In terms of prevention, the report recommends routine assessment of social and emotional development early in childhood to allow early intervention of at-risk children.

It also recommends expansion of parent education programs through child and family health centres, recognising parents’ behaviour can affect their kids’ mental health. Behaviours like showing affection to children, promoting their autonomy as they get older, and reducing criticism, punishment and conflict in the home have been demonstrated to reduce children’s risk of mental health problems.

Read more: More Australians are diagnosed with depression and anxiety but it doesn't mean mental illness is rising

But even if they’re fully rolled out, these reforms may not be enough. Arguably, the report takes too little account of the major risk factors for mental ill health that operate early in life, such as emotional, physical and sexual abuse, poverty, family violence and bullying – mentioning them only in passing.

These early childhood adversities account for a substantial proportion of mental illness in the population (30% according to one estimate) and play a role in all types of mental illness right across the lifespan.

And these adversities commonly cluster together in families, magnifying their impact. To not give them a major focus in the draft report is like a report on cancer having little to say about smoking, alcohol use and UV exposure.

The report should have considered how we could go about reducing these major risk factors at a national level, with the sort of long-term commitment we’ve seen reducing the risk factors for chronic physical diseases. 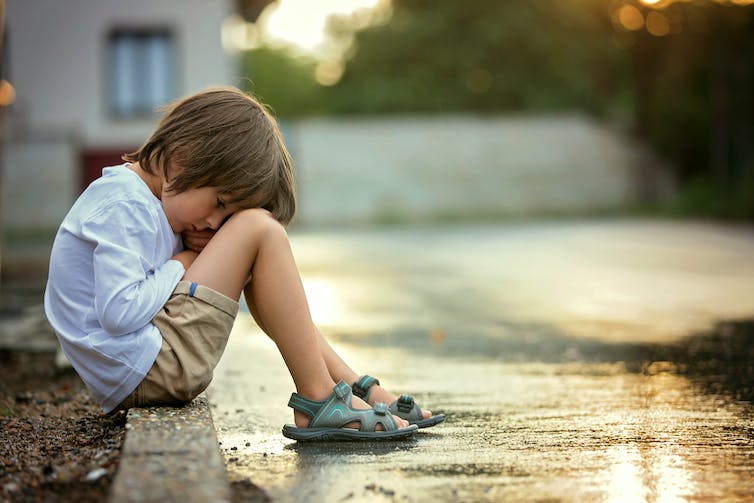 Adverse experiences in childhood are a significant risk factor for mental health problems later on. From shutterstock.com

The report’s recommendation for increased parent education could potentially contribute to reducing these risk factors, but too often the families at greatest risk don’t participate in these programs.

We need to see a gradual shift in social norms across the whole community to promote parenting behaviours that protect against mental illness, while reducing those that increase risk.

There has been a welcome increase in community awareness of the adverse mental health impacts of child sexual abuse, but it’s not widely known that emotional abuse of children can have similar effects.

We also need to strengthen economic supports for families. Former prime minister Bob Hawke’s famous pledge that “by 1990, no Australian child will be living in poverty” remains unfulfilled. The fact poverty is a key driver of mental illness is too often forgotten in the focus on reforming mental health services.

We need to broaden understanding of the links between adverse childhood experiences and mental disorders among both the public and health professionals. Health and welfare professionals working with children should be trained to routinely enquire about childhood adversities in order to initiate early intervention and lessen their impact.

Read more: If we're to have another inquiry into mental health, it should look at why the others have been ignored

Towards the final report

There are a lot of sound recommendations in the commission’s draft report, largely covering service provision for people with mental illness. Nobody in the mental health sector would question the need for improvement in these services.

However, without greater attention to the key drivers of mental illness, the commission’s report won’t be optimally positioned to make a real difference.

If this article has raised issues for you or you’re concerned about someone you know, call Lifeline on 13 11 14.