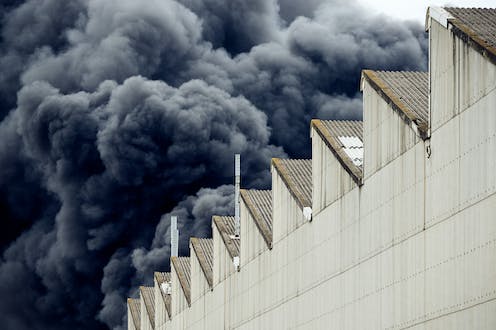 Modern buildings have seen rapid development in recent decades, with a push towards sustainable practices and improved energy efficiency. But the advancement of fire safety has been less prioritised, and we need to rethink our approach.

Combustible cladding materials, which are often found in buildings, pose safety concerns. The systems originally in place to help solve this problem weren’t good enough. That’s why my colleagues and I created the Cladding Materials Library, an online database which provides insight into the flammability of various cladding materials.

Cladding materials used in modern rainscreen systems on the outside of buildings offer insulation and protect buildings against rain, wind and sun. They also let architects create interesting building designs, such as by adding bright colours or curves to the exterior.

But flammability in modern cladding materials, among other failings, has led to increasingly frequent fires breaking out across the world. Examples include the 2014 Lacrosse fire in Melbourne and the 2017 Grenfell Tower fire in London.

The extent of the problem

Many cladding materials currently used are flammable to varying degrees, including very common Aluminium Composite Panels (ACPs). These have a plastic-based core material (such as polyethylene), with a sheet of aluminium glued to either side. While ACPs can sometimes be nearly non-combustible, they’re generally considered flammable.

In Queensland, about 18,000 buildings have been looked at to determine cladding flammability and overall building response to fire. Of these, 75% required no further action. For the remaining 25%, engineers were hired to further investigate whether they were problematic or not.

The Queensland government estimated 100-200 of the buildings needed to be made safer, with the price of work on a single building costing up to tens of millions of dollars.

It’s important to note some buildings with combustible cladding otherwise had rigorous fire safety designs, such as networks of well-maintained fire doors, short escape distances, good firefighter access, and layouts that minimise risk. Thus, having flammable cladding does not necessarily mean a building is dangerous.

Nonetheless, such materials shouldn’t have been included without architects, engineers and builders properly understanding the associated risks.

To help, we developed a database

The database my colleagues and I created, the first of its kind, offers a detailed collection of flammability information and material properties for different types of common cladding materials.

Generally, the same materials are used repeatedly across buildings, as there are only so many products available on the market. We used small-scale testing (10cm samples) to identify exactly which materials were the most important.

But identifying a material is not enough to understand how it performs in a fire. That’s why we completed flammability testing (of samples up to 1m in length) on 20 materials commonly found on the outside of buildings.

Over the course of a year, we took 1,100 small material samples from buildings and performed 9,250 tests. We then identified 75 unique cladding materials, and narrowed these down to 20 materials, on which we performed detailed testing (with about 30 tests per material). We chose a wide range of materials to ensure the most common ones were represented in our selection.

The experiments we did involved exposing the materials to heat in controlled ways, and then changing the amount of heat to see how the samples responded. Our process included measuring the time taken for a material to ignite, the amount of heat released from the material, how the heat was released, and how the flames spread.

Our results are now publicly available in the Cladding Materials Library, which can be updated as new materials are invented. The database will help fire engineers effectively assess the potential fire risk of buildings.

Fire engineers can use our database to determine how a building as a whole might perform during a fire. They may then ask questions such as:

But fire engineers involved in such investigations also need ongoing training to update their knowledge. For many, this came in the form of a continued professional development course designed by the University of Queensland, and a similar course for building professionals (such as builders and architects) developed by the Queensland government.

The latter has been important to the success of our project, as it allows building professionals to understand the problems at hand, and the reports written by engineers.

Safety in the future

For now, fire engineers hired by either the government or by building owners are making immediate changes to the relevant buildings to boost their short-term safety. Eventually, they will make suggestions for how to improve long-term building safety, which may cost more time and money.

The only way to solve the issue of fire risk is to understand how each building performs, and to have a suitably qualified engineer take responsibility for its design.

Our research will represent a change in how we approach solving this problem, and will hopefully help prevent fires in the future.