Any moves to greatly increase the population of northern Australian by 2060 could have a devastating impact on the local environment without long-term careful planning by all tiers of government.

That’s the finding of research that looked at several scenarios to increase the population of the north to 5 million people.

That’s an extra 3.7 million people, or an almost four-fold increase in the current population of northern Australia.

Read more: Three charts on: why congestion charging is fairer than you might think

But, given the potential impact of climate change on northern Australia, we could see population movement the other way as people in the north head south.

The region of Australia above the Tropic of Capricorn covers an area of 3,500,000km² – about 45% of Australia’s landmass – yet it houses only 5% of its population.

Northern Australia has already been identified as a “gateway to Asia”.

It’s also described as the largest intact “savanna remaining on Earth […] with a rich biodiversity of international significance”.

Current federal government planning for northern Australia is in the Our North, Our Future white paper, released in 2015.

The report adopts a pro-development stance, seeing the north as a place of economic bounty and opportunity.

While it is mute on issues of settlement patterns, there are statements that allude to the government’s support for significant urbanisation:

We need to lay the foundations for rapid population growth and put the north on a trajectory to reach a population of four to five million by 2060.

The white paper also refers to “the development of major population centres of more than a million people”. Such cities would be around six times the size of the current largest northern city of Townsville, population about 180,000.

Given the existing city planning documents do not countenance the scale of population growth projected in the white paper, we developed three scenarios for how the federal government could distribute this northern Australian population of 5 million by 2060.

Economic and lifestyle factors concentrate the increased population in the four dominant northern cities of Darwin, Cairns, Townsville and Mackay. Each would have populations of more than a million by 2060.

The populations of Port Hedland, Broome, Kununurra, Darwin, Cairns, Bowen, Townsville and McKay will each increase by 462,000 people.

Read more: Requiem or renewal? This is how a tropical city like Darwin can regain its cool

This figure is in line with the Australian government’s vision of northern cities with “more than a million people”.

The fate of the north

Irrespective of the scenario, our findings show population growth will not be good for the local environment without any overarching long-term planning frameworks to steer urbanisation.

This is particularly the case for scenarios 1 and 3 where the required increase in urban area either outstrips, or is only just commensurate with, the availability of cleared land adjacent to Darwin, Cairns and Townsville.

As such, population growth at the scale proposed by the white paper could result in substantial destruction, degradation and fragmentation of peri-urban ecosystems – where urban meets rural – by urban development and expanding road networks. 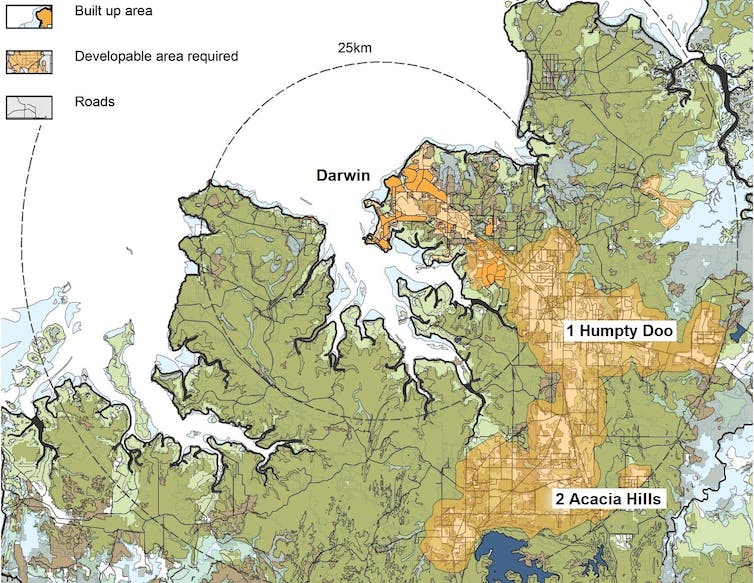 In Darwin’s case, in Scenario 1 the additional 925km² of urbanisation required would sprawl south of the city in a corridor to as far as Humpty Doo (1) and down to Acacia Hills (2). 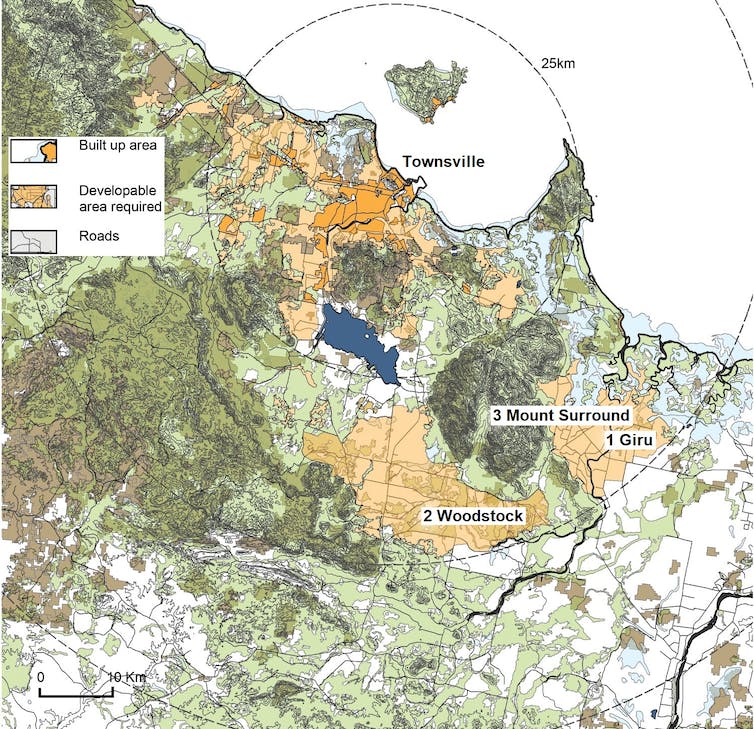 In Townsville, in Scenario 1 for growth, the additional 925km² of urbanisation would result in sprawling along the coast and around the existing centres of Giru (1) and Woodstock (2), and around Mount Surround (3).

While Townsville has 957km² of cleared land and theoretically could just accommodate this growth, it is likely to cause extensive damage to the local environment through land degradation and fragmentation by urban development. 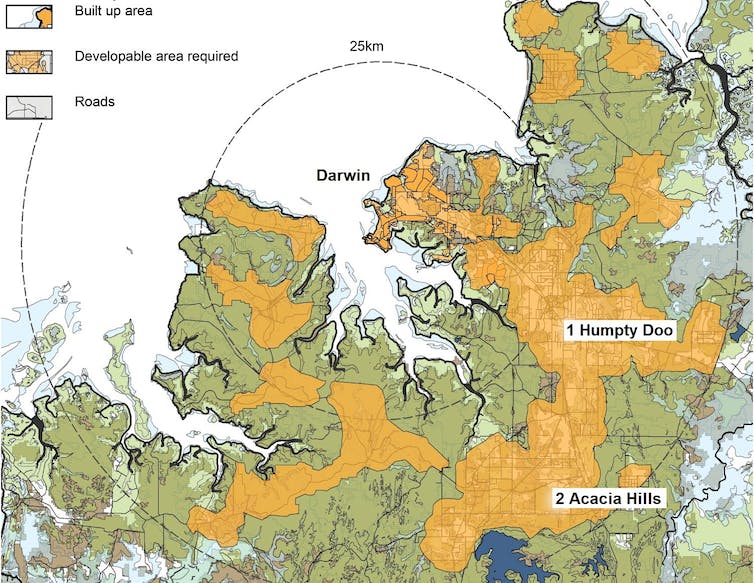 In Darwin, with Scenario 3 and concentrated growth, the urban expansion required for the city is 1,500km². This would dwarf the city’s 296km² of developable land and result in substantial clearing of remnant vegetation.

Clearly then, if the scale of population growth envisaged in the white paper occurs without any comprehensive planning, the result will be harmful for the north.

To avoid this fate we need a bipartisan settlement strategy (most closely resembling Scenario 2) to steer the urbanisation of northern Australia.

Policymakers and planners should develop this strategy based on a comprehensive landscape analysis of northern Australia. If the scale of population growth envisaged in the white paper occurs without such planning, the result will be ruinous for one of the world’s last great wildernesses.

But the federal government should also decide whether a population of 5 million in the north is something we should aspire to at all.

If the worst climate change projections are borne out, we could end up with migration from cities such as Darwin to cities further south, even into the southern states.