Hepatitis B is blood-borne virus that packs a punch. Worldwide, more than 1.3 billion people have been infected with hepatitis B, and 257 million people have developed a life-long infection. This includes 240,000 Australians, many of whom are Indigenous.

Globally, transmission most commonly occurs from mother to baby or in early life. But it’s possible to be infected in adulthood, through sex or blood-to-blood contact.

Most people who are infected in adulthood develop a short infection which their immune response controls. But in around 5% of adults and 90% of babies, the immune response is ineffective and chronic infection develops.

Read more: Dr G. Yunupingu's legacy: it's time to get rid of chronic hepatitis B in Indigenous Australia

Hepatitis B virus causes almost 40% of all liver cancer, which is the fifth most common cancer and the second leading cause of cancer-related death worldwide.

Hepatitis B virus was discovered in the serum of an Indigenous Australian in 1965 and was first known as the “Australia antigen”.

This quickly led to the development of an effective vaccine in the 1980s, which is now available worldwide. The vaccine has been given to Australian infants since May 2000.

(If you weren’t vaccinated as a baby, you might want to consider doing so through your GP, particularly if you plan to travel to Asia and Africa where hepatitis B is common.)

Unfortunately the vaccine doesn’t do anything for the 240,000 or so Australians who currently live with chronic hepatitis B. Only around 60% of these people have been diagnosed; the rest don’t know they’re infected and don’t receive appropriate care.

How is it currently treated?

There is no cure for chronic hepatitis B virus.

In most cases, treatment requires taking a pill every day for life to remain effective and to reduce the risk of liver cancer. Even then, it doesn’t eliminate the risk.

Chronic hepatitis B hasn’t been cured so far in part because current therapies have failed to destroy the viral reservoir, where the virus hides in the cell.

This is in contrast to hepatitis C virus, which has no such viral reservoir and can now be cured with as little as 12 weeks of treatment.

Read more: In contrast to Australia's success with hepatitis C, our response to hepatitis B is lagging

Despite the huge human and economic toll of chronic hepatitis B, research to cure the disease remains underfunded. There is a misconception that because there is a vaccine, hepatitis B is no longer a problem.

The availability of effective cures for the unrelated hepatitis C virus has also led people to believe that “viral hepatitis” is no longer a problem.

Experts estimate that liver cancer deaths will substantially increase in coming decades without a cure for hepatitis B, despite deaths from most cancers decreasing. 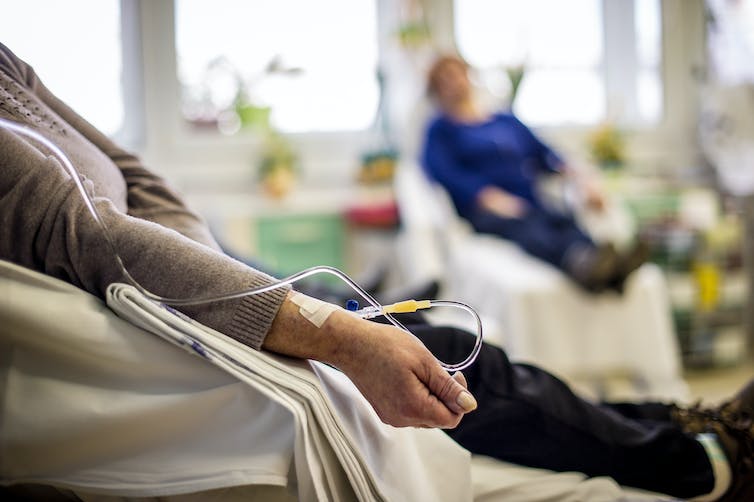 Hepatitis B causes 40% of all liver cancer. Napocska/Shutterstock

How far have we got?

Some exciting research is underway around the world, including the recent identification of the “cell receptor” which allows the virus to infect the body. This has enabled studies of the complete virus replication cycle including the viral reservoir that is untouched by current therapies.

New approaches to a possible cure include mechanisms to block the virus’ entry into the cell and to stop the virus from making the proteins it needs to replicate and infect new cells.

Studies are also underway to enhance patients’ immune responses so their own natural defences can control or even eliminate the virus. This is similar to immunotherapies already being used to treat some cancers.

It’s likely a hepatitis B cure will require a dual-pronged approach, directly targeting the virus while also enhancing the immune response in people who are infected.

The goal is to reduce the amount of virus in the body and restore the person’s immune responses. This is called a “functional cure” and is similar to what happens when a person naturally gets rid of the virus. It would also mean they didn’t need to take drugs any more.

Some of these approaches are now in early stage human clinical trials. More than 30 drugs have been developed and are being tested in people with chronic hepatitis B. However, much more work needs to be done to achieve a cure.