“Remaining and expanding”. The propaganda tagline of Islamic State (IS) has rung hollow since the collapse of the physical caliphate. But recent developments in northeastern Syria threaten to give it fresh legitimacy.

US President Donald Trump lifted sanctions on Turkey after he announced the Turkish government agreed to a permanent ceasefire in northern Syria.

In a televised speech, he pushed back against criticisms of his decision to remove 1,000 troops from Syria, abandoning their Kurdish allies.

This decision allowed Turkish forces – a hybrid of Turkish military and Free Syrian Army rebels, including jihadi extremists – to surge across the Turkish border and begin intense bombardment of towns and cities liberated from IS.

Just how quickly and how far IS will rise from now remains unclear. One thing that’s certain, however, is that IS and the al-Qaeda movement that spawned it, plan and act for the long-term. They believe in their divine destiny and are prepared to sacrifice anything to achieve it.

Read more: As Turkish troops move in to Syria, the risks are great – including for Turkey itself

In speaking about the resurgence of IS, we risk talking up the IS brand, the very thing it cares so very much about. But the greater risk is underestimating the capacity for reinvention, resilience and enduring appeal of IS.

And complacency and short-sighted politics threaten to lead us to repeat the mistakes of a decade ago that saw a decimated Islamic State in Iraq (ISI) insurgency roar back to life.

In 2006, Sunni tribes in northwestern Iraq killed or arrested the majority of ISI fighters with US support, reducing their strength from many thousands to a few hundred.

But with no backing for the Sunni tribes from the poorly functioning, Shia-dominated government in Baghdad, the outbreak of civil war in Syria, and the draw-down of US troops, ISI launched an insurgency in Syria before rising triumphant as Islamic State in Iraq and Syria (ISIS).

ISIS quickly became the most potent terrorist group in history, drawing more than 40,000 fighters from around the world, and seizing control of north eastern Syria and north western Iraq.

The final defeat of the IS caliphate in north eastern Syria came after five hard years of fighting and 11,000 lives from the Syrian Democratic Forces (SDF), largely composed of members of the Kurdish YPG.

To the US, the SDF fighters were local partners and boots-on-the-ground after multiple false starts and expensive mistakes from allying with rebel groups in the Free Syrian Army. Without this SDF alliance, the IS caliphate could not be toppled.

Donald Trump’s betrayal of the SDF in recent weeks is disastrous on several levels. It ignores the threat IS represents and validates ISIS’s central narrative.

What’s more, it contributes to the very circumstances of neglect, cynical short-term thinking and governance failures that lead to giving the IS insurgency an open pathway for recruiting. 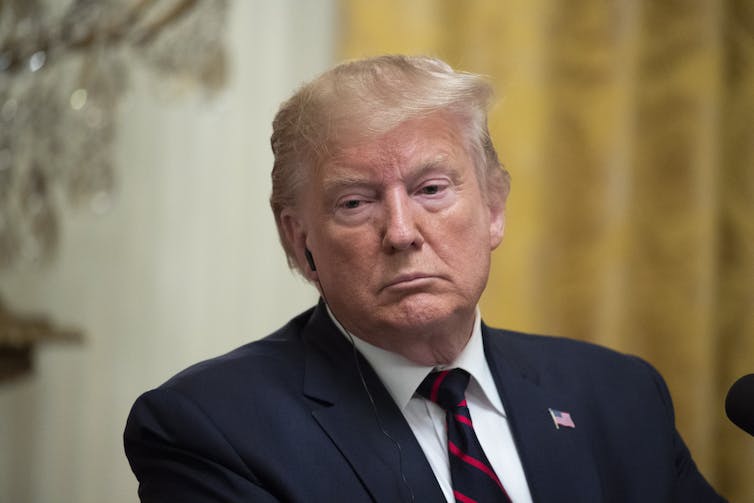 This is somewhat understandable. After almost US$6 trillion of US Federal expenditure and two decades of fighting, surely enough is enough.

But the inconvenient truth is IS and al-Qaeda jihadi fighters around the world have increased, in some estimates nearly four-fold, since September 11.

Still, betraying the SDF and pulling out of Syria for small short-term savings risks jeopardising all that has been achieved in defeating the IS caliphate in northwestern Iraq.

IS hardliners in overcrowded camps

IS will never return to its days of power as a physical caliphate, but all the evidence points to it tipping past an inflection point and beginning a long, steady resurgence.

IS has thousands of terrorist fighters still active in the field in northern Iraq. They’re attacking by night and rebuilding strength from disgruntled Sunni communities, as well as having thousands of fighters lying low in Syria.

But in recent months, the tempo of IS attacks has shifted from Iraq to Syria with the previously hidden insurgency reemerging.

As many as 12,000 terrorist fighters, including 2,000 foreigners, are detained in prisons run, at least until this week, by the SDF. Many are located in the border region now being overrun by the Turkish military and the Syrian jihadi it counts as loyal instruments.

Elsewhere, in poorly secured overcrowded camps for internally displaced peoples (IDPs), tens of thousands of women, many fiercely loyal to IS, and children are held in precarious circumstances.

In the Al Hawl camp alone there are more than 60,000 women and children linked to IS, including 11 Australian women and their 44 children, along with 10,000 IDPs.

The IS hardliners not only enforce a reign of terror within the camps, but are in regular communication with IS insurgents. They confidently await their liberation by the IS insurgent forces.

The hope of being freed is neither naive nor remote. Already, hundreds of fighters and IDPs have escaped the prisons and camps since the Turkish offensive began.

From mid-2012 until mid-2013, IS ran an insurgent campaign called “Breaking the Walls”. It saw thousands of hardened senior ISIS leaders, and many other militants who would later join the movement, broken out of half a dozen prisons surrounding Baghdad.

Suicide squads were used to blast holes in prison walls. Heavily armed assault teams moved rapidly through the prisons, blasting open cells and rushing the hundreds of liberated terrorist fighters into tactical four-wheel-drives. They were to be driven away in the desert through the night to rebuild the senior ranks of ISIS.

The liberated fighters were not only more valuable to ISIS after their time in prison, with many switching allegiances to join the movement, they were better educated and more deeply radicalised graduating for what they refer to as their terrorist universities.

It would appear the same cycle is now being repeated in northeastern Syria.