With the discovery of 20 more moons orbiting Saturn, the ringed planet has overtaken Jupiter as host to the most moons in the Solar system. Saturn now has 82 known moons, whereas Jupiter has a paltry 79.

Announced at the International Astronomical Union’s Minor Planet Centre by a team of astronomers from the Carnegie Institute for Science led by Scott S. Sheppard, the discovery is the latest advance in the 400-year history of our understanding of the satellites of our neighbouring planets.

As technology has improved, we have observed more and more of these tiny, distant worlds – and we can be reasonably confident there are still plenty waiting to be discovered.

How do we even know Saturn has moons?

Although the planets of the Solar system are all visible to the naked eye and have been known to humans since antiquity, it wasn’t until Galileo Galilei turned a telescope on Jupiter in 1610 that we discovered Earth was not alone in having an orbiting companion.

Read more: Curious Kids: why does Saturn have rings?

It became clear that the giant planets are surrounded by multitudes of satellites, resembling smaller versions of the Solar system. By the middle of the 19th century, telescopes had improved enough that the first eight moons of Saturn – including Titan, the largest – had been viewed directly.

The introduction of photographic plates, which enabled the detection of fainter objects with long-exposure observations, helped astronomers increase their count of Saturn’s moons to 14.

It was a long journey (literally) to the next big improvement in our view of Saturn’s moons. Many of the smaller moons were not discovered until the Voyager fly-by missions in the 1980s and the more recent 13-year stopover of the Cassini spacecraft in Saturn’s orbit.

Until these closer visits, we knew little about the moons aside from the fact that they existed.

One of Cassini’s goals was to explore Titan, which is the only moon in the Solar system with a thick, smoggy atmosphere. Another was to take a look at Saturn’s other mid-sized moons, including frozen Enceladus, which may hold an ocean of liquid water beneath its icy crust.

Read more: A look back at Cassini's incredible mission to Saturn before its final plunge into the planet

Cassini also discovered much smaller moons, so-called “shepherd moons” that interact with Saturn’s rings by carving gaps and wavy patterns as they pass through a rubble of rocks and snowballs.

These close-up observations from space advanced our understanding of individual moons that stay near to Saturn. Recently, many more moons have been found in orbits much further from the planet.

These more distant moons could only be detected with large optical telescopes such as the Subaru telescope at Mauna Kea in Hawaii. The telescope is equipped with sensitive cameras that can detect some of the faint objects separated by millions of kilometres from Saturn.

The new moons were discovered by comparing photos like this pair taken about an hour apart. While the background stars stay fixed, the moon – highlighted with orange bars – moves between frames. Scott Sheppard

To confirm that these objects are indeed associated with Saturn, astronomers have to observe them over days or even months to reconstruct the shape and size of the moon’s orbit.

Many small moons are fragments of shattered large moons

Such observations revealed a population of moons that are often described as “irregular” moons. They are split into three distinct groups: Inuit, Gallic, and Norse. They all have large, elliptical orbits at an angle to those of moons closer to the planet.

Each group is thought to have formed from a collision or fragmentation of a larger moon. The Norse group consists of some of the most distant moons of Saturn, which orbit in the opposite direction to the rotation of the planet. This suggests they could have formed elsewhere and were later captured by the gravitational force of Saturn.

Of the 20 new moons, 17 belong to the Norse group including the furthest known moon from the planet. Their estimated sizes are of the order of 5km in diameter. 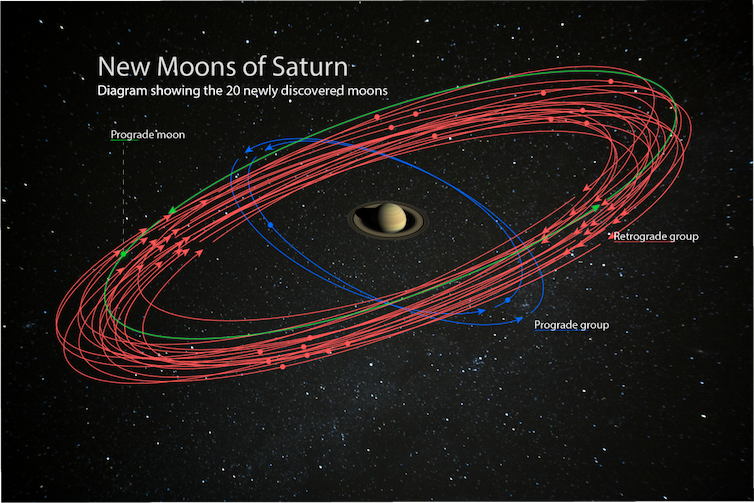 Most of the newly discovered moons have retrograde orbits, going in the opposite direction to Saturn’s spin. Carnegie Institution for Science

Have we found all the moons now?

Are we likely to find even more moons around Saturn? Absolutely.

Some of the newly discovered moons are very faint and at the limit of detection with currently available instruments. New, bigger telescopes such as Giant Magellan Telescope will allow us to observe even fainter objects.

In the meantime, the 20 new moons need names. Carnegie Science has invited everyone to help.