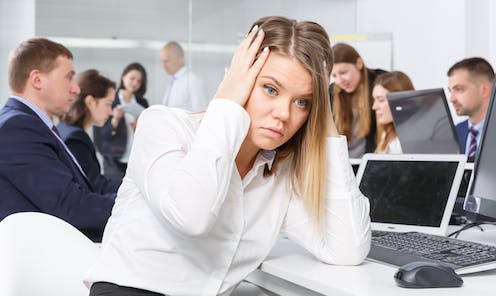 A key reason many organisations want to move their employees to open-plan workspaces is to encourage collaboration and improve communication. The assumption is that the increased visibility and access workers have to one another will ease the flow of information and enhance learning, well-being, and collegiality.

Research suggests that, in some circumstances, this can indeed be the outcome. But another study recently found found exactly the opposite, with workers engaging in 73% fewer face-to-face interactions, along with a 67% increase in electronic communication.

It is not just face-to-face communication that becomes worse in open-plan offices. There are findings that satisfaction decreases, well-being is impacted, privacy decreases, and people become less friendly.

One undeniable aspect of open-plan offices is the increased exposure and access to others they offer. This is sometimes deemed a benefit - particularly because it increases opportunities to learn from, and network with, high-status colleagues. But our research suggests that being more visible may not be good for everyone.

Our study in a large open-plan law firm in Auckland found that, although occupants generally liked this well designed work environment, there was a gender difference in the responses. Every survey respondent who specifically mentioned being visible, watched, observed, exposed or more accountable was a woman. The male occupants, it seems, were oblivious to their increased exposure. This difference in responses was especially striking since we did not set out to explore the gender effects of open-plan work spaces.

It wasn’t that all the women especially disliked being so exposed. In fact, being visible came up several times when they were describing positive aspects of the space, outlining how the open office improved their productivity. One lawyer said:

Overall the effect on my productivity is positive - can always be seen, so always working unless nobody is around.

Knowing that other people can see what I am doing also motivates me to be productive.

But this female lawyer was keenly aware of the downside of being so visible:

I don’t like that sometimes it feels like people are judging you for not giving enough face time as everything is so visible. Back at [previous office] there was more of a motto of getting the work done in the time needed and then go home. Now, with open space, it feels more like a fish bowl and I have noticed more subtle pressure to stay later even if you don’t technically need to - based on looks some seniors, even from entirely different teams, give you.

Other research looking at the effect of working in a glass open-plan, largely transparent office, revealed the unexpected outcome of women becoming hyper-aware of being continually observed and evaluated, just as we found. Women (but not men) in this study reported becoming more image conscious, changing the way they dressed, how and where they walked, and feeling exposed.

Why is this? Are women really being looked at more than their male colleagues?

Research into the male gaze and surveillance behaviour on nudist beaches suggests they are. But, whether they are or not, women are socialised, practically from birth, to believe they are being looked at.

Every time a girl is told she is cute or pretty, or even described in gender-neutral, objective terms such as being tall, she is actually being told she is being looked at and assessed on her appearance. Boys are far more likely to have their behaviour or personality commented on by adults, rather than their appearance - being brave, adventurous or clever.

Even more insidious is the notion that appearance evaluations genuinely matter in numerous situations. The benefits that attractive women receive include everything from social mobility and college admissions to educational attainment and job offers. Women rated as being unattractive or unfeminine are more negatively evaluated than comparably unattractive men.

Given that women’s outcomes are, at least in part, determined by their appearance, it is not surprising that, compared to their male colleagues, female workers are comparatively more aware of their visibility.

Research suggests we should question the notion that, just because we can see and hear our colleagues, we will have more and better in-person conversations. The communication benefits of increased exposure to others afforded by open-plan space may be overstated, and the downside of being so visible may disproportionately impact women in the workplace.

The idea that female and male employees differ in their perceptions of being observed should be acknowledged and incorporated into office design.

How? By ensuring that, within open-plan environments, female workers are afforded opportunities for privacy. This includes allowing them to work with their backs to the wall or to be seated away from busy thoroughfares, and by positioning desks so that women are not forced to walk past numerous colleagues on their way to amenities such as the kitchen or the bathroom.

Or, best of all, allowing people to work remotely (and in total privacy) for at least part of the week.