This week’s United Nations climate summit may go down in history - but not for the reasons intended. It was not the tipping point for action on global warming that organisers hoped it would be. It will instead probably be remembered for the powerful address by Swedish teen activist Greta Thunberg, who castigated world leaders on behalf of the generation set to bear the brunt of inaction.

Young people are not sitting back and waiting for older generations to act on the climate crisis. Days before the summit, school students led a climate strike attended by millions around the world. And at the first ever UN youth climate summit, more than 500 young people from 60 countries, including myself, explored how to meet the commitments of the Paris Agreement.

This group of activists, innovators, entrepreneurs, and change-makers aged between 18 and 30 showcased potential solutions and put global political leaders on notice: they must fight off the climate crisis at the scale and pace required. 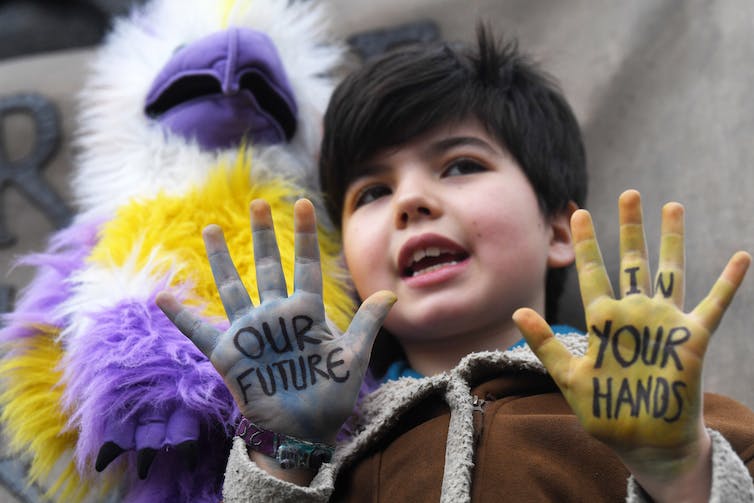 A young boy takes part in the global climate strike on September 20 at Parliament Square in London. Neil Hall/EPA

Youth aged 15 to 24 years represent 16% of the world population and will reach 1.3 billion people by 2030. Obviously the action (or otherwise) of today’s decision makers on climate change and other environmental threats will affect generations to come - a principle known as intergenerational equity.

Millions of young people around the world are already affected by climate change. Speaking at the youth summit, Fijian climate action advocate Komal Kumar said her nation was at the frontline of a crisis and worldwide, young people were “living in constant fear and climate anxiety … fearing the future”.

“Stop hindering the work [towards a sustainable future] for short term profits. Engage young people in the design of adaptation plans,” she said. “We will hold you accountable. And if you do not remember, we will mobilise to vote you out.”

UN Secretary-General António Guterres attended the event and his deputy Amina Mohammed took part in a “town hall” with the attendees, alongside senior representatives from government and civil society.

Young people are not sitting idly by

Participants learnt how to amplify their voices using Instagram and how to create engaging videos with their mobile phones. An art workshop taught youth how creativity can help solve the climate emergency, and a networking session showed ways that youth leaders to stay connected and support each other. 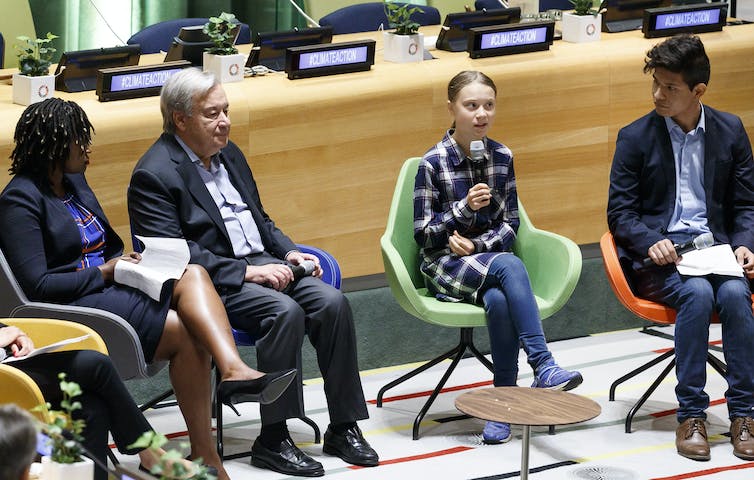 Elsewhere, you don’t have to look far to see examples of young climate warriors, including in the developing world.

Programs funded by the UN development program include in Kazakhstan where youth are helping implement an energy efficiency project in schools, and in Namibia where young people are being trained as tour guides in national parks and nature reserves. In Nepal, young people cultivate wild Himalayan cherry trees as a natural solution to land degradation.

Harness the power of nature

Nature-based solutions to the climate crisis - such as conserving and restoring forests, grasslands and wetlands - were a key focus at the summit. Efforts to meet the Paris climate goals often focus on cutting fossil fuel use. But nature has a huge ability to store carbon as plants grow. Avoiding deforestation keeps this carbon from entering the atmosphere.

To date, such solutions have received little by way of investments and funding support. For example in 2015, agriculture, forestry and land-use received just 3% of global climate change finance.

Appearing at the youth summit, the global Youth4Nature network told how it mobilises young people to advocate for nature-based solutions. Their strategy has included collecting and sharing youth stories in natural resources management in more than 35 countries.

Youth ‘will be watching’ their leaders

When it comes to climate change, young people have specific demands that must be acknowledged - and offer solutions that other generations cannot.

But globally there is a lack of youth representation in politics, and by extension, they are largely absent from climate change decision-making.

Read more: The rise of 'eco-anxiety': climate change affects our mental health, too

Some youth summit participants reportedly questioned whether it achieved its aims - including the value of some workshops, why celebrities were involved and whether anything tangible was produced. 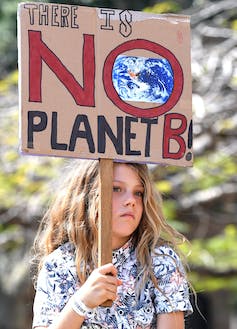 A young girl attends the the global climate strike in Brisbane. Dan Peled/AAP

Certainly, there was little evidence that world leaders at the climate summit were listening to the demands of young people. This was reflected in the failure of the world’s biggest-polluting countries to offer credible emissions reduction commitments.

But the youth summit went some way to granting young people space and visibility in the formal decision-making process.

Pressure from young people for climate action will not subside. Thunberg said it best when she warned world leaders that youth “will be watching you”.

“The eyes of all future generations are upon you,” she said. “If you choose to fail us, I say we will never forgive you”.