Just before 7am on September 29, 2009, a magnitude 8 earthquake struck the sea floor in the central South Pacific, about 190kms south of Samoa. It was exactly the sort of earthquake – in fact, it was two almost simultaneous quakes – that create devastating tsunami.

The Earth’s crust tore apart, triggering a region-wide tsunami. Within minutes it inundated Samoa’s coastline, before rolling on to American Samoa and Tonga.

Read more: Explainer: after an earthquake, how does a tsunami happen?

While a tsunami warning was issued by the Pacific Tsunami Warning Center and relayed by Samoan officials, it was not rebroadcast everywhere. Regardless, the tsunami arrived too quickly for many to escape. In Samoa, 189 people died when the tsunami reached up to 14 metres above normal sea level and many more were injured across the region. Hundreds of millions of dollars of damage was done.

Ten years on from this tragedy, it’s time to look back at the lessons we learned – and how they can help us adapt to a rapidly changing climate, which is making similar natural disasters more and more likely. 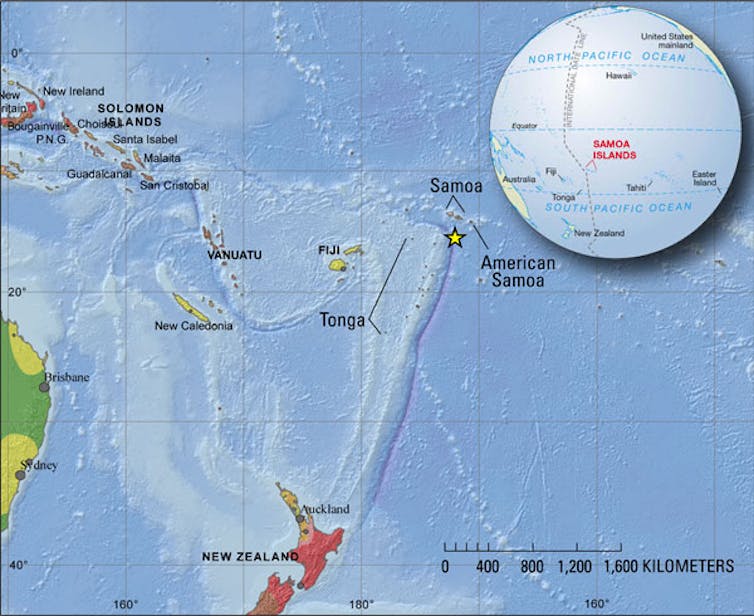 A new approach to post-disaster research

As is common after a major disaster, Samoa’s government and emergency services quickly began assessing the damage and the needs of affected communities, to direct relief and recovery efforts. The government did an excellent job given the logistical challenges that face small island developing states after such events.

It is also common for researchers from a wide range of disciplines, from earth sciences to engineering to health studies, to visit impacted areas to study the causes and effects of such disasters, and make suggestions to improve future disaster management planning and practice.

Such researcher-led field reconnaissance surveys are usually small, comprising just a few individual researchers and usually from the same discipline. These expeditions are quickly organised, and the researchers get in and out fast – too often focused on their own interests, and not working with the government or scientists of the affected country. This means serious ethical issues can arise.

After this earthquake and tsunami, I thought we could do better.

I proposed bringing incoming researchers from multiple disciplines, to collaborate with local communities and Samoan researchers and officials. This proposal was accepted, and I was quickly appointed to head up what became the largest ever international post-tsunami survey team.

Our team ended up comprising nearly 200 local and international participants working in multidisciplinary teams for up to a month between October and November 2009.

Critically, for the first time, the team negotiated between incoming scientists with specific questions, and local scientists and the government to ensure their research really did benefit Samoan communities.

As team leader, I reported daily to the prime minister and King of Samoa updating them on research findings, gave local TV and radio interviews on how things were going and worked with researchers to nudge field activity in directions that benefited everyone.

At the end of the survey the team provided a report to the prime minister and government on our findings. This set a new global benchmark for how post-disaster surveys could be done. 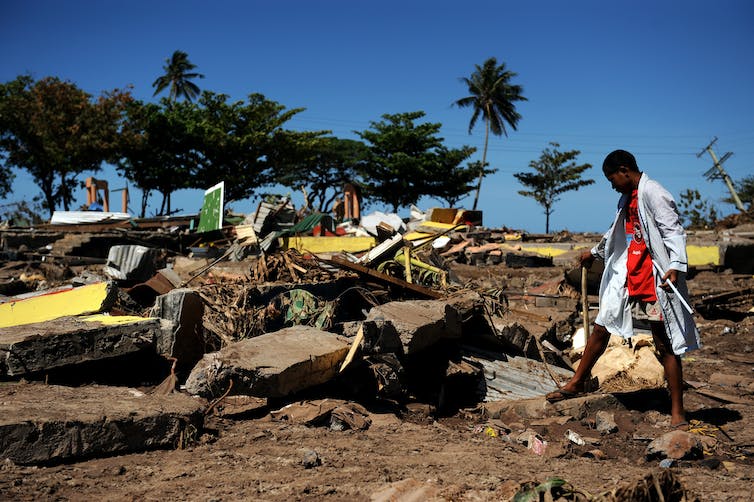 A boy looks through the wreckage of a Samoan village after the 2009 tsunami. Paul Miller/AAP

The lessons we learned

As a consequence of this approach, I was appointed by the United Nations to co-lead a global working group that rewrote the handbook on how post-disaster surveys should be organised and operated.

We learned so much from the Samoan survey team, and from continuing research efforts over the last ten years following other major disasters such as the 2011 Japan earthquake-tsunami and 2013 Philippines Typhoon Haiyan disasters. Key lessons include that:

Disasters are on the rise and climate change will only make things much worse. Earth is destabilising rapidly.

Climate change (coupled with environmental degradation and an increasing population which increases exposure to hazard events) are driving more frequent and intense disasters.

Read more: Explainer: are natural disasters on the rise?

In fact, according to the United Nations Office for Disaster Risk Reduction, weather and climate related disasters have more than doubled over the last 40 years. They have said,

90% of recorded major disasters caused by natural hazards from 1995 to 2015 were linked to climate and weather including floods, storms, heatwaves and drought. 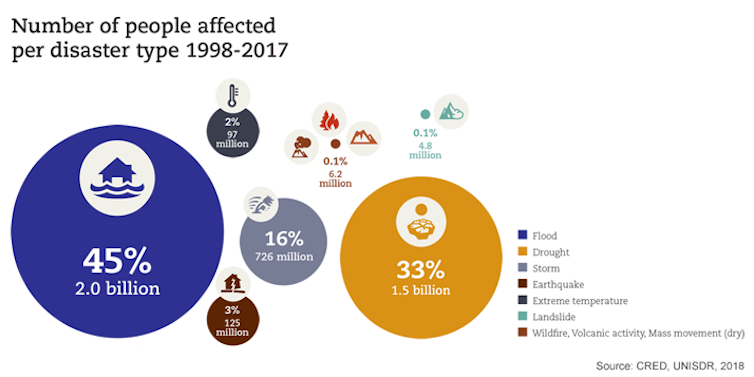 Number of people affected by disasters of different types between 1998 and 2017. UNISDR

A heart wrenching factor is the poorest people around the world always bear the greatest burden of loss to natural disasters due to inequality and poverty. Layered on top of the particular vulnerability of poorer people to disasters, global statistics show the Asian region experiences the most disasters of all types. 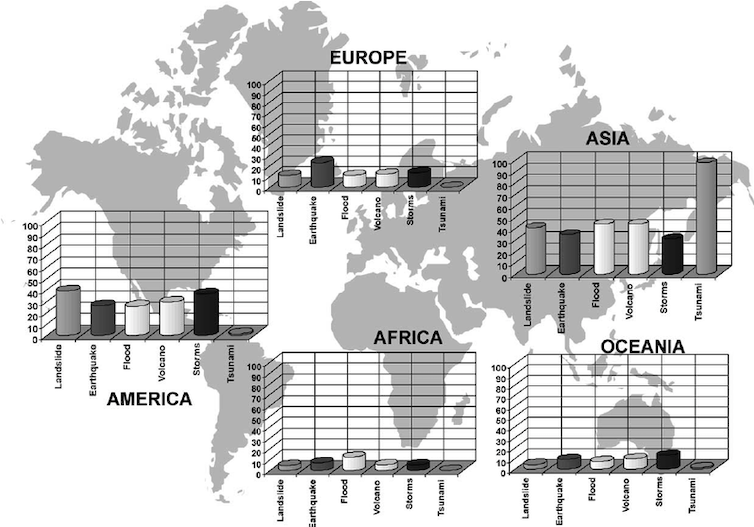 Occurrence of different types of disasters by regions. Cylinders show the percentage of each particular disaster in a given region in relation to the whole world. Alcantara-Ayala, 2002

Earth is unique, dynamic, fragile and dangerous. Human activity is driving changes that, if not addressed soon, will result in disasters in the near future that are outside our experience and capacity to cope with.