Since the mass production of plastic began, almost six billion tonnes of it - approximately 91% - has remained in our air, land and water. Plastic production and use is embedded in the global economy, and in our natural environment. This culture of waste is clearly perilous and unsustainable.

Our paper, published today in the journal Frontiers in Marine Science, argues that only a global, market-driven intervention can stop the plastic tide.

It is backed by a commitment by the Minderoo Foundation, chaired by the lead author, of up to US$300 million (A$443 million) to help establish the scheme and ensure its integrity.

The paper argues that the intervention - a voluntary financial contribution paid by global manufacturers of fossil fuel-based plastic - would drive a system-wide transition to recycled plastic. Our modelling shows that this would lead to a dramatic slowdown in the production of new plastic - creating huge benefits for marine life and human health.

We must turn off the tap

Plastic takes so long to break down that every piece produced since its inception in 1856 still exists today, except the small share we’ve burned into poisonous gases.

Many strategies to address the plastic problem have been proposed to date, and efforts have been commendable. But we are bailing out a bathtub with a thimble - while the tap is running.

We have identified a simple solution: a voluntary industry contribution for new fossil fuel-based plastic production.

We believe this technical and financial initiative would level the playing field by making recycled plastic more competitively priced, establishing the right market conditions for a circular plastics economy.

We know from our discussions with industry that this would release technology, in particular chemical or ‘polymer-to-polymer’ recycling, that is proven today but cannot yet compete economically with new fossil fuel-derived plastic. Increased demand from recyclers would transform plastic waste into a commodity, driving plastic recovery and creating incentives for industry to invest and transition. This is already true for materials like aluminium cans, which are highly recycled because the metal has an inherent value. 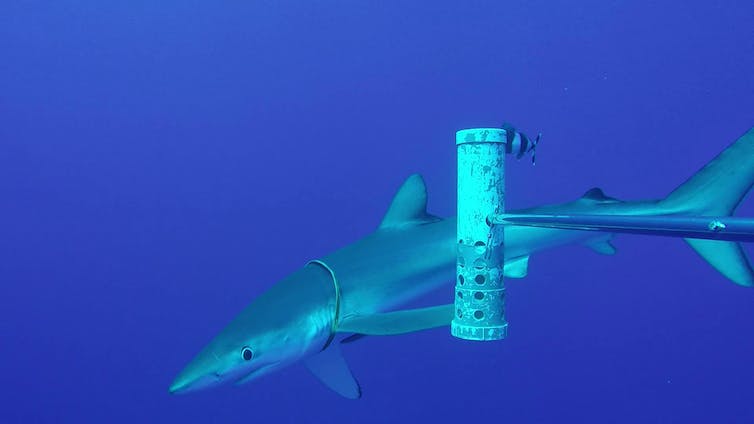 Read more: Plastic warms the planet twice as much as aviation – here's how to make it climate-friendly

Our relationship with plastic is broken

The vast majority of plastics produced to date are derived from fossil fuels. Plastics are made from polymers - long molecular chains comprising smaller carbon-based molecules. Oil and gas are the cheapest materials from which to produce raw polymer resin. This resin is then made into plastic by adding dyes, plasticizers and other chemicals.

Fossil fuel-based plastic has countless uses and is produced very cheaply. Plastic recycling has largely been overlooked because, in the developed world at least, our waste is carted away from our homes and often shipped overseas. This leaves little incentive to tackle our plastic addiction.

But our “out of sight, out of mind” mentality cannot persist.

In 2017, China banned imports of 24 types of solid waste, mainly plastics. This revealed the extent to which developed countries had been sending their waste problem elsewhere. In Australia this led to recyclables being stockpiled, landfilled or sent to countries ill-equipped to handle them.

Read more: China bans foreign waste – but what will happen to the world's recycling?

Media coverage is also increasingly highlighting the environmental impact of our throwaway culture: plastic washed up on beaches, filling the guts of endangered marine animals and accumulating en masse in circular ocean currents.

This is an abhorrent market failure, which conservatively costs US$ 2.2 trillion (A$3.25 trillion) each year in environmental and socioeconomic damages not taken into account by business or the consumer. 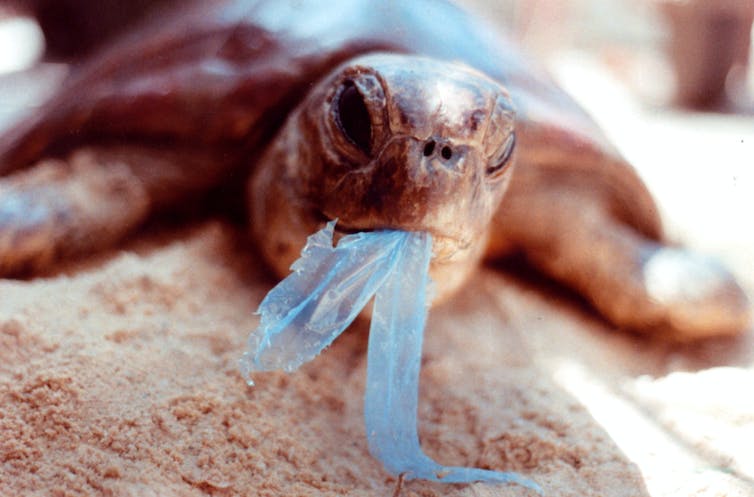 A turtle with a plastic bag fragment in its mouth. Plastic waste in the world’s oceans is devastating some marine life. Melbourne Zoo

The Sea The Future initiative

We propose an initiative led by global manufacturers in which they make a voluntary financial contribution for each unit of new fossil fuel-based plastic produced. We have dubbed the initiative “Sea The Future”.

Placing a value on plastic both drives its collection and diverts new production away from fossil fuels. The contribution, estimated in our paper as averaging US$500 (A$738) per tonne, would be key to encouraging the small number of global resin producers to choose recycled plastic over fossil fuel as their raw material.

The cost would be passed onto consumers via trillions of individual plastic items. The impact would be negligible - say, a few cents on a cup of coffee - and so is likely to gain broad public acceptance.

Anticipating the concerns of regulators that such a move could be perceived as anti-competitive, the lead author has engaged with global law firms to ensure that the initiative is compatible with free market competition law in countries across the world. 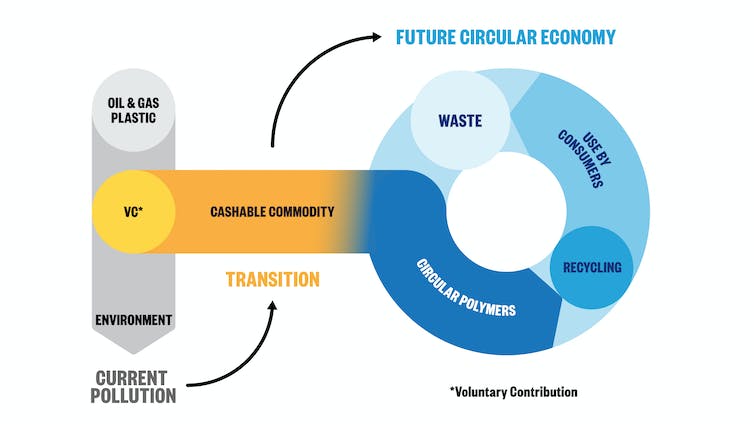 The contribution turns plastic waste into a cashable commodity, feeding the circular economy.

The estimated US$20 billion (A$29.5 billion) per year raised through the initiative would be used to help establish recycling infrastructure, aid industry transition and remediate the environment. Increased demand and a higher price for recycled material also promises to significantly improve the livelihoods of waste pickers - hundreds of thousands of vulnerable people who currently carve meagre earnings from collecting plastic.

The funds would be administered by a self-regulated global industry body, independently audited to ensure performance, accountability and transparency. To address concerns over governance costs, the Minderoo Foundation has committed to underwrite up to five years’ worth of audit fees totalling US$260 million (A$384 million), plus cover US$40 million (A$59 million) in start-up costs, subject to appropriate conditions.

The future is circular

Public pressure is mounting for action on plastics - and what is bad for the planet is ultimately bad for business. The alternatives to an industry-led approach are less appealing. Plastic bans deny us a useful product upon which our economies rely; taxes typically go directly to general revenue and are unlikely to be applied to plastic waste management. So, tax-derived funds are seldom transferred between nations, ignoring the transboundary nature of plastic pollution.

Our global discussions with companies throughout the plastics supply chain have revealed that the vast majority recognise the need to move away from a linear plastics economy. They also understand that a global, market-based mechanism is the only path to achieving the system-wide transformation required.

Society discards over 250 million tonnes of valuable polymer, worth at least a US$ 1,000 per tonne recycled, in plastic waste each year. Soon, if we do nothing, that could grow to 500 million tonnes per annum. What industry would allow half a trillion US dollars of waste each year? Recovering it is simply good business for the environment.