One of the time-honoured tests of the diplomatic skills of any Australian prime minister has been dealing with the United States. We are frequently assured by the hard-headed realists who make and influence strategic policy that this is a relationship no PM can afford to mishandle.

Stuffing up is not an option. To judge by Scott Morrison’s lavish reception by the Trump administration, things really couldn’t be better.

But given our prime minister is dealing with someone who even some respected prominent former public officials from the US think is “seriously, frighteningly, dangerously unstable”, this could well be regarded as a modest triumph. It’s simply not controversial to suggest that Donald Trump is a highly unpredictable, erratic, inexperienced narcissist who has – to put it politely – an implausibly inflated sense of own abilities.

Under such circumstances, deciding whether the trip will be judged a success or failure is not a simple task, despite the Murdoch press predictably suggesting that an ever close strategic alliance is the only benchmark that matters.

And why wouldn’t they? After all, Lachlan Murdoch was one of the high profile guests, along with other business luminaries, adding to the theatrical quality of much of the visit. 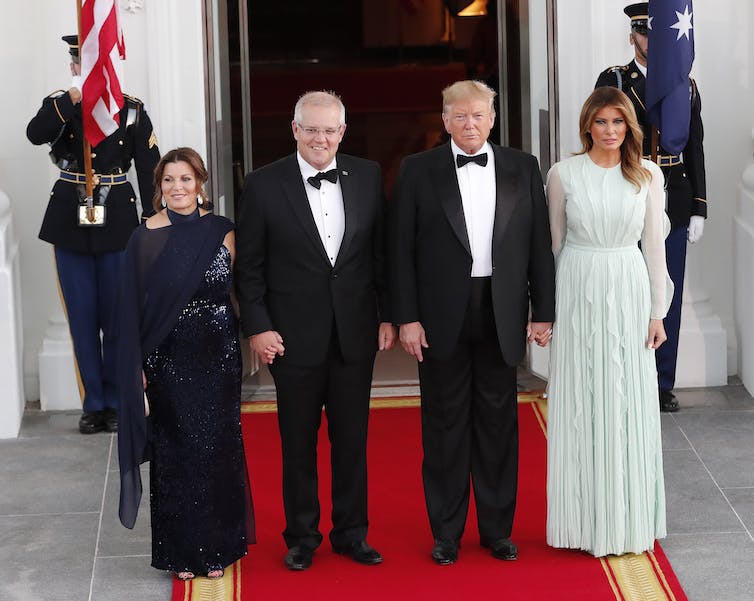 The State Dinner for Scott Morrison was just the second hosted by the Trump administration. Erik S. Lesser/EPA

One assumes that behind closed doors many issues of substance were discussed, even though this is a president who famously doesn’t do detail or nuance.

To judge by some of Trump’s public utterances, however, this can’t have been an easy task. The fact that the president casually mentioned that China, our largest trading partner, is a “threat to the world”, or hinting that the use of nuclear weapons remains an option when dealing with the likes of Afghanistan or Iran, might have given even the most enthusiastic alliance supporter pause for thought.

Read more: As Scott Morrison heads to Washington, the US-Australia alliance is unlikely to change

While some influential Americans may think that destabilising China and undermining President Xi Jinping is not a bad outcome, things are a little more complicated for Australia.

Morrison’s White House visit will confirm many of China’s equally hawkish strategists in their view of Australia as a slavishly predictable lackey of the US.

Indeed, Beijing reminded us of just how important our bilateral relationship with China has become in a recent op-ed in the state mouthpiece, the Global Times. After Arthur Culvahouse, the US ambassador to Canberra, called on Australia to stand up more to China, the Global Times warned:

Morrison would be better off if he kept Australia’s national interests in mind while savouring foie gras at the White House.

When it comes to China, any prime minister would face the same difficult task reconciling Australia’s strategic and economic interests.

Read more: Avoiding the China trap: how Australia and the US can remain close despite the threat

Diluting our economic dependence on China won’t be easy or quick. Beijing can signal its displeasure with Australia in the meantime by holding up imports or even discouraging Chinese students from studying in an “unfriendly” country.

To be fair, Morrison has done his best not to gratuitously upset the Chinese leadership at a time when a rising tide of nationalism in China is defining its foreign policy. Indeed, the PM won rare praise in China for his support of embattled Liberal Gladys Liu.

But actions, as they say, speak louder than words in any language, which is what gives this trip such symbolism.

Rising tensions in the Middle East

Such concerns may not be uppermost in Morrison’s mind as the Americans turn on the charm for one its more reliable allies. As he frequently points out,

Australia is a reliable alliance partner — we pull our weight and we get things done.

That these things include fighting endless wars in the Middle East that have little immediate strategic relevance to Australia is less frequently mentioned.

Given that we may be about to embark on yet another entirely unnecessary, unpredictable adventure that may result in a conflict with Iran, this is not an inconsequential concern.

Morrison has been careful not to make an open-ended commitment to the US-led mission to protect shipping in the Strait of Hormuz, but we know only too well how these sorts of modest contributions to shoring up the alliance can end.

Does anyone really think the Vietnam War or the invasion of Iraq were really good ideas in retrospect? And yet, Australia’s policymakers thought they were acting unambiguously in the national interest at the time of those conflicts, too, and they had little option other than to support our great and powerful friend.

Not much has changed in that regard, despite the disastrous consequences of these wars.