When journalist Brian Toohey began researching his book Secret: The Makings of Australia’s Security State, he could not have foreseen publication would coincide with real-time overreach by government agencies of their security responsibilities.

Contemporary examples of such overreach include: a raid on a Canberra journalist’s apartment in search of evidence of who might have leaked top-secret information about the government’s surveillance plans; pursuit of a former intelligence officer and his lawyer over revelations Australian agents had bugged presidential offices of Australia’s weakest neighbour; and intrusions into ABC offices to gather evidence of sources of information about alleged Special Air Service war crimes in Afghanistan.

Laws that are antagonistic to journalist inquiry in pursuit of wrongdoing have been hustled through the Australian parliament in the past several years. Toohey writes:

No major party seems bothered by the use of new surveillance technology that allows governments to detect contact between journalists and their sources, effectively denying whistle-blowers the opportunity to reveal abuses of power and criminal behaviour.

If this was simply a matter of constraining journalists’ attempts to expose government secrets, it would be one thing. But it has become an assault more broadly on the public’s right to know about the seamier aspects of government behaviour.

Read more: Why the raids on Australian media present a clear threat to democracy

Governments have taken advantage of the war on terror to strengthen their ability to suppress unwelcome disclosure. In the process, they have raised the stakes for whistle-blowers whose conscience dictates that activities that skirt – or break – the law should be exposed.

The Labor opposition has baulked at its responsibilities to push back against some of the more expansive powers accorded under the security legislation.

Labor’s weakness is not least a consequence of its worries about being wedged on national security issues. In this regard, governments of the day have taken advantage of legitimate concerns about multiple security threats.

All this is well described in Toohey’s sprawling account of the history of the Australian security state. It stretches from the early fumbling days of the Australian Security Intelligence Organisation (ASIO), whose activities would not have been out of place in the Keystone Cops.

Read more: To protect press freedom, we need more public outrage – and an overhaul of our laws

Based on a lifetime of reporting for various publications, including The Australian Financial Review and the National Times, Toohey provides behind-the-scenes snapshots of the Central Intelligence Agency’s anxieties about threats posed by the Whitlam government to American spy stations on Australian soil. He also examines the role of senior public servants in manipulating governments of the day and intelligence blunders that led to the Iraq war.

The list is long, and reflects poorly on the individuals and agencies involved. 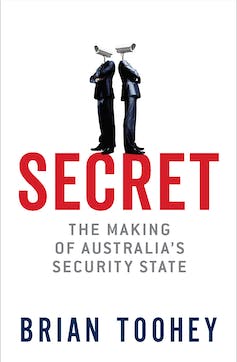 Media organisations have realised too late the threats the new security legislation poses to journalistic inquiry. Proprietors and the industry itself, for that matter, have underestimated the determination of government to pursue journalists and whistleblowers under both existing statutes and the new legislation. In the absence of explicit freedom of speech protections in the Constitution, Australian journalists find themselves at the mercy of a vastly expanded security state. No government, Labor or conservative, is likely to reverse course. The June 2018 Espionage Act is one case of Orwellian overreach. It makes it an offence to receive information of any kind, whether true or false and whether in a material form or not, and includes (a) an opinion; and (b) a report of a conversation. How this provision made its way through a democratically-elected legislature is confounding. Apart from a description about threats posed to reasonable disclosure of information about government activities in the public interest, the rub of Toohey’s book lies in its telling of the sort of relationship that has evolved between Australia and its security guarantor. This will be regarded by readers and critics as the most controversial element of Secret. Not everyone will agree with the author’s observations about risks to Australian sovereignty posed by its security relationship with the United States allied with a potentially damaging antagonism towards China in the national security establishment. But his arguments are well made and deserve attention. This is especially so in view of our involvement in Iraq 2003, where the principal justification post facto has been that Australia needed to continue making regular down-payments on its security arrangements with the United States. This is what Toohey describes as Australia being “chained to the chariot wheels of the Pentagon”. He writes: The British monarchy has no say in Australian government decisions. It’s a different story with the head of the American Republic. A US president presides over a military-industrial complex with a huge say in whether the Australian government goes to war, buy particular weapons, host US-run military intelligence bases and ban trade with certain countries. The upshot is that Australia has now surrendered much of its sovereignty to the US. In this context, Toohey quotes an off-key contribution to the debate about the power of a military-industrial complex. In 2016, former Australian ambassador in Washington, Kim Beazley, in his capacity as a board member in Australia of Lockheed Martin, gave a speech in which he described himself as a member of a “benign deep state” where the real power is “a military/intelligence phalanx”. Read more: The shaky case for prosecuting Witness K and his lawyer in the Timor-Leste spying scandal It is not clear whether he was joking, but the fact is he has long associated himself with an uncompromising pro-American viewpoint. Beazley, now governor of Western Australia, remains influential in Labor security policy-making. Toohey’s concluding chapters offer some fairly pungent criticism of Australia’s national security establishment. It refuses, he says, to welcome China’s rise. Instead, it agitates for an increased US military presence in the region, it advocates a confrontational approach to Beijing and a strategy aimed at damaging the Chinese economy, never mind that this will have negative consequences for Australia itself. At the same time, it lobbies for an ever-closer security relationship with the US summed up by Malcolm Turnbull in 2017 in which he said Australia is militarily “joined at the hip to the US”. Toohey argues that rather than being “joined the hip”, Australia has more scope for individual initiative, and, in extreme circumstances, the capacity to deter and defend itself. This book is the work of a contrarian. It should be read.