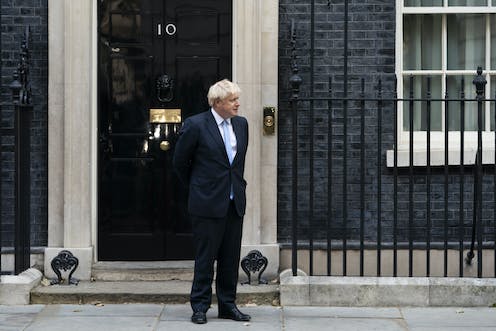 In the ongoing saga that is Britain’s attempted divorce from the European Union, Monday is shaping up to be the most significant day to date. Prime Minister Boris Johnson is expected once again to try to force a general election from a parliament that has him in a headlock.

Last week, opposition MPs and rebellious Conservatives voted to take back control of the parliamentary agenda from the government. They did so to block Johnson’s attempt to take the UK out of the EU without a deal to soften the blow. In this, they succeeded. But to break the deadlock, an election will have to come one way or another - and soon.

The resignation of work and pensions secretary Amber Rudd from Johnson’s cabinet is the latest blow to Johnson’s barely disguised attempt to leave the EU without a deal. Rejecting the deal currently on the table but coming up with nothing new of substance, Johnson’s strategy and tactics rested on bluster to scare the EU and rally the true believers at home.

Yet herein lies the problem with the crash-or-crash-through approach to politics: sometimes you just crash.

Johnson and the hard Brexiteers who took control of cabinet in July are the authors of their own misfortune. They have lost control of parliament through their reckless tactics.

Johnson won the leadership of the Conservatives just two months ago, promising to take the UK out of the EU on October 31, “no ifs, no buts”. This means that whenever it comes, the looming election will effectively be another referendum on Britain’s membership of the EU.

Whatever the pre-existing manifesto commitments, the ideal outcome for Johnson and the hard Brexiteers was always to leave without a deal.

Rudd’s resignation tweet confirmed as much. The hard Brexiteer theory was that Brexit could only truly succeed if it was realised in its pristine form: severing all economic and political ties with the EU with immediate effect.

But not everyone in the UK welcomed such liberation from all that EU food and medicine. Nor were they warmed by the thought of the renewed Britain that the hard Brexiteers insisted would emerge from the no-deal chaos.

This is an electoral problem for Johnson and the Conservatives. Certainly, some leave voters are prepared to take the risks of a no-deal Brexit (assuming they have read the government’s own leaked advice or not dismissed independent assessment because they didn’t like it). But many of those who rejected that no-deal vision are Conservative MPs and voters.

Brexit has bent and contorted party loyalties. The radical push for no deal was a bridge too far for many Conservatives. It certainly was for Rudd and those 21 MPs who voted against the government on September 3 and were expelled for their troubles.

Conservative MP Dr Phillip Lee cited this radicalisation in the letter justifying his defection to the Liberal Democrats. He wrote:

…the Brexit process has helped transform this once great Party into something more akin to a narrow faction, where an individual’s “conservatism” is measured by how recklessly one wishes to leave the European Union. Perhaps most disappointingly, it has increasingly become infected with the twin diseases of populism and English nationalism.

If this is how Lee feels, many other Conservatives are no doubt feeling the same.

Of course, for many voters, English nationalism and populism are not the disease, but the cure. In a rare moment of sincerity, Johnson meant what he said about being prepared to come out without a deal. But it was also designed to steal the new Brexit Party’s thunder.

Nigel Farage’s party secured the most votes in the elections to the European Parliament held in May (the deferred Brexit meant that the UK was still legally obliged to participate). These votes came principally from disgruntled Conservative voters, so doing something to win them back was important. Blaming the EU (especially the Irish) for no deal is a crucial plank in the hard Brexiteer strategy, but one that is backfiring.

Despite the rhetoric about Britain, most leave voters care less about maintaining the UK than getting out of the EU. Nevertheless, Northern Ireland’s pro-UK Democratic Unionist Party (DUP) must still be counted among Johnson’s dwindling band of allies, even if their leader Arlene Foster has declined to run in the imminent election.

Brexit’s political chaos should be manna from heaven for the main opposition, Jeremy Corbyn’s Labour Party. But the prospect of an election carries risks for Labour too. The idea of a Brexit borne on the tide of white, working class male revolt can be overstated.

Nevertheless, there are constituencies where a pro-Remain Labour MP represents pro-Leave constituents, and this creates an electoral dilemma. To come out as a “remain” party would please most of its urban professional support, but create a rift between remain- and leave-voting Labour supporters.

This has given rise to Labour’s confusing ambiguity on the issue in past months. It now supports a referendum if it wins an election for which it is currently blocking until Johnson asks the EU for another extension; which he refuses to do.

In any case, the Labour party needs to gain more than 70 seats to gain a majority, given its own defections. This would require a major shift in public opinion from the 2017 election. The best hope for no-dealers is not therefore a Labour government, but some sort of temporary coalition between Labour, the Liberal Democrats, the Greens, disgruntled ex-Conservatives and the Scottish National Party (SNP).

Of all the major parties, the SNP has the clearest vision for the United Kingdom: it wants to leave it. The party leadership is open about its desire to remain in the EU (even if an estimated 30% of their voters might disagree). The SNP’s dilemma is whether to make an alliance with other parties in Britain ostensibly to block a no-deal Brexit government, but ultimately in order to secede from the UK. Given most Remain voters in England identify as “British” this will be unpalatable to them.

Read more: Boris Johnson has suspended the UK parliament. What does this mean for Brexit?

In fact, Brexit is a misnomer in three ways: it is driven by a sense of English – rather than British – malaise. It’s transnational support from the Trump administration suggests the international and domestic agendas that come with the no-deal project. It is not just about “exit”, but comes with a program for domestic change of a radically conservative variety.

While Brexit has spilled over into US politics, Ireland’s supporters in the US Congress could scupper plans for a post-Brexit free trade agreement between the UK and the USA. Such an agreement is a key part of Johnson’s hard-Brexit strategy that underscores the transnational dimension to the politics of Brexit.

Whatever the drivers of Brexit, it is ultimately for the electorates in an increasingly divided UK to decide. It’s quite possible the forthcoming election will not alter the parliamentary arithmetic in any significant way.

But it’s the only way this arithmetic can change and so it must be embraced by a politics-weary electorate throughout the four nations of the UK.