A study of three remote community water supplies in northern Australia, published today in the journal PLOS Neglected Tropical Diseases, revealed that bores with high levels of iron were more likely to harbour Burkholderia pseudomallei, the bacterium that causes the potentially fatal disease melioidosis in both humans and animals, than bores with low iron levels.

The study, by researchers from Charles Darwin University and Menzies School of Health Research, reveals the challenge of delivering safe water to remote communities in Australia’s wet-dry tropics, many of which rely on bore water from shallow aquifers. But we also found that treating water with chlorine is an effective way to improve its safety.

Based on a modelling study, melioidosis causes an estimated 89,000 deaths worldwide, and people with diabetes, chronic lung or renal disease or hazardous alcohol use are particularly at risk. Deaths due to contaminated drinking water have been documented in Northern Australia and Thailand, where B. pseudomallei is endemic.

B. pseudomallei is found naturally in soil and surface water in rural areas around Darwin. Around one-third of tested unchlorinated residential bores were positive for this bacterium, and it has also been found in aerator sprays and tank sludge from water treatment plants.

Water can usually be made safe by treating it with chlorine, although in laboratory experiments some B. pseudomallei strains can tolerate higher chlorine levels than others.

There is also an association between B. pseudomallei and increased iron levels in bore water. Naturally occurring iron-cycling bacteria can metabolise the iron, producing bacterial films inside pipes that contribute to corrosion and reduce bore yield. The problem with biofilms is that opportunistic pathogens in water supplies such as Legionella pneumophila or Pseudomonas aeruginosa can also colonise the biofilms, protecting the bacteria from chlorination.

Many aquifers in Northern Australia contain naturally high levels of iron, and some are also shallow and prone to inundation with surface water during the wet season. This iron-rich source water potentially compromises the water in the distribution system.

Putting bores to the test

The problem is that we know very little about the microbiology of drinking water in remote communities. To learn more, we studied three remote water supplies in the Top End with varying iron levels: one low, one medium, and one high.

The “high iron” community had water with an average of 0.8mg of iron per litre – more than double the threshold of 0.3mg/L suggested by the Australian drinking water guidelines above which the taste of water is affected. 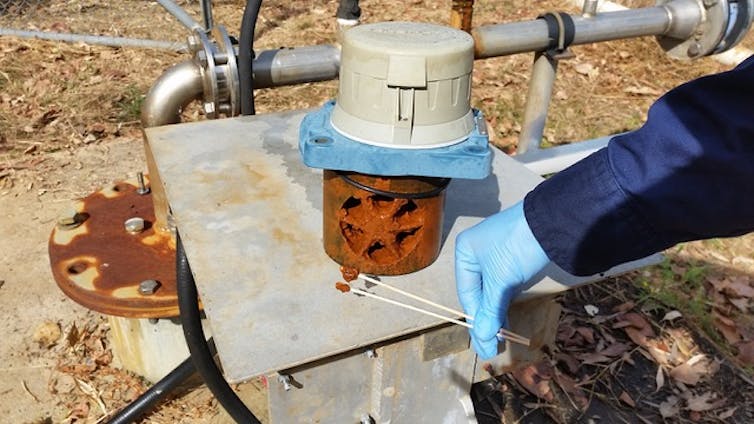 For each community, together with collaboratorsPower and Water Corporation, we sampled water from five points along the drinking water distribution system, of which three were unchlorinated (bores and tanks), and two were from the chlorinated reticulation system. We then used genetic sequencing to survey the bacterial communities in water.

We found that the geochemistry of the groundwater had a substantial impact on the types of bacteria in untreated water, particularly in the case of bacteria that can metabolise iron.

We found B. pseudomallei in bores with high iron levels, and in a bacterial biofilm inside a bore pipe which also contained iron-oxidising Gallionella, nitrifying Nitrospira, and free-living Hartmannella amoebae, which may be able to harbour B. pseudomallei.

If B. pseudomallei occurs inside amoebae growing in remote communities’ source water, this could make it harder to successfully target the bacteria using chlorination. Second, the interaction with Gallionella bears further scrutiny because this iron-oxidising bacterium is increasingly used in biological iron-removal filters.

In our samples we detected three pathogen groups: non-tuberculous mycobacteria, Pseudomonas aeruginosa, and B. pseudomallei. Importantly, B. pseudomallei was found in water with scarce nutrients. This highlights the fact that this bacterium can thrive under nutritionally poor conditions (it has been known to survive even in distilled water for up to 16 years). This in turn means when water providers routinely monitor the water supply integrity by using heterotrophic bacteria counts, they might not suspect the presence of B. pseudomallei as the former cannot survive under such nutrient scarce conditions.

Surprisingly, we also found B. pseudomallei in a bore accessing a deeper aquifer. We will need to investigate further across all seasons to determine whether this bacterium does indeed live in deeper, confined aquifers, or whether it is mainly linked to intrusions of surface water during the wet season. The latter would be easier for water providers to manage.

We detected no B. pseudomallei in treated water, although we did find abundant DNA of another opportunistic pathogen group: non-tuberculous mycobacteria.

Read more: Some remote Australian communities have drinking water for only nine hours a day

Our study provides a first snapshot of the bacteria in a selection of remote water supplies, and can hopefully contribute to improved management of water supplies in the wet-dry tropics.