Last week, the Queensland government extinguished native title over tracts of land in the Galilee Basin so the Adani coal mine could proceed.

This gives Adani freehold title to the land, and means the Wangan and Jagalingou native title holders’ objections no longer have the same legal significance.

But they do have moral significance, and this decision has implications for Australia’s international reputation.

Australia voted against the adoption of the United Nations’ Declaration on the Rights of Indigenous Peoples in 2007, before changing its view and accepting the declaration as an “aspirational” statement in 2009, complete with its insistence that development on Indigenous lands should not take place without the Indigenous people’s “free, prior and informed consent”.

At the time, federal Minister for Indigenous Affairs Jenny Macklin explained the declaration had the potential to help reset “the relationship between Indigenous and non-Indigenous Australians and mov[e] forward towards a new future”.

But, legally, extinguishment means the land in the Galilee Basin is no longer Indigenous land.

And while extinguishment of native title remains possible and has happened, the “aspiration” for Indigenous people to enjoy political authority over their own affairs, as the declaration promises, is severely restricted.

What is native title?

Native title is regulated under the Commonwealth Native Title Act 1993. But the commercial interests of Adani prevailing over the rights of the Wangan and Jagalingou people shows just how fragile the act is.

Native title is the recognition Aboriginal and Torres Strait Islander people have rights to land according to their own laws and customs.

It also recognises Indigenous rights of prior occupancy. This follows the Mabo v Queensland decision of the High Court in 1992, in which the court found Australia was not terra nullius – it was not “unoccupied land” when British colonisation began.

Then, in 1996, the High Court granted a native title claim by the Wik peoples of Cape York. This case was significant because the court found native title could co-exist with pastoral leases issued by the government. A lease over pastoral land did not automatically extinguish native title. 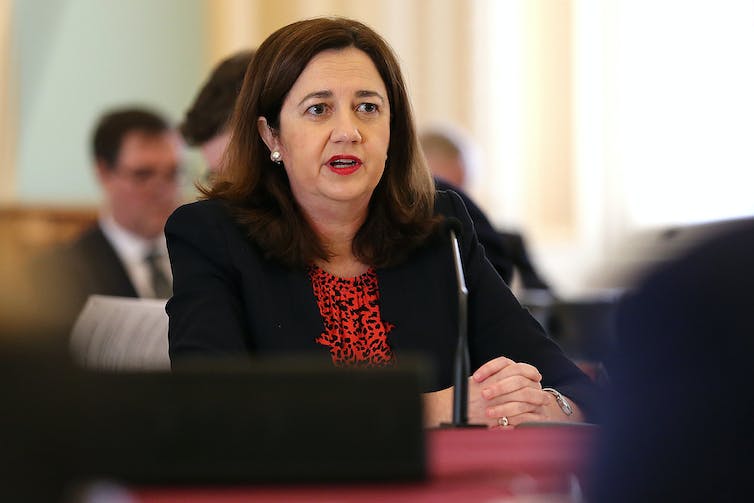 Political controversy about the scope of the native title right followed. There were deeply contested arguments about whose positions would prevail when there was conflict between native title rights and the rights or interests of others, with some arguing pastoral leases should, in fact, automatically extinguish native title.

With the guidance of the UN declaration, Queensland could aspire to more democratic values. In a liberal democratic society, the internationally-recognised right to property is a basic right and should not be taken away lightly.

At the same time, mining on Indigenous lands is not always a source of conflict. Native title holders can enter Land Use Agreements with companies like Adani to allow mining on mutually beneficial terms.

Some native title holders in the Galilee Basin preferred this approach, but others did not because they wanted to retain use and custodianship of the land.

The deep politics of racial division is at play when governments position mining as in the public interest, with Indigenous land owners obstructive of that interest and not part of the public on whose behalf governments are supposed to govern.

The UN declaration imagines a more inclusive idea of who and what makes up the “public”, with Indigenous peoples having the same meaningful opportunities as anyone to participate in decision-making, and their perspectives respectfully heard.

According to the declaration, Indigenous peoples have the right:

to participate fully, if they so choose, in the political, economic, social and cultural life of the state.

The declaration also affirms Indigenous rights to land and culture. If one sees it as an aspirational document, as Australia does, then the declaration would allow cultural priorities to be expressed by Indigenous people in policy-making forums.

Read more: FactCheck: can native title 'only exist if Australia was settled, not invaded'?

the right to maintain and strengthen their distinct political, legal, economic, social and cultural institutions.

Indigenous autonomy cannot be realised when native title is extinguished. Taking away native title means the full implications of the High Court finding that Australia was not terra nullius in 1788, cannot be fully examined.

The declaration’s aspirations for language, culture, land, and decision-making authorities provide a framework for thinking about what it means to have fundamental human equality in a land which has, in fact, been occupied for many thousands of years.