In Julia Leigh’s play Avalanche: A Love Story, based on her 2016 memoir detailing the raw anguish of her six unsuccessful attempts at IVF, these words, though they are kindly intended by her sister (a mother of two), precipitate an angry crisis.

Peake’s character – called “Woman” – cannot make her dream of a baby real and cannot give it up either. In a fury, she kicks a chair across the stage.

Like Leigh, Peake has spoken candidly about her own struggle with IVF in real life. Her solo performance is astonishing for the way it brings warmth and a kind of likeability to the pain, raw bitterness and terrifying resentment that has been carefully written into the part she plays.

In Avalanche, Peake’s character starts her clinical journey at 37. Her partner is seeking to have a vasectomy reversed. If all goes well, the doctor tells her, you should be able to conceive naturally. “But I don’t want to see you here in two years’ time.”

Woman doesn’t conceive. And then she’s back at the clinic in two, three and five years. Sex becomes a chore, under pressure of conflicting needs and work interests, the marriage disintegrates. After her divorce, she makes the tough decision to pursue her dream alone as a single parent.

The naming of this character as Woman is perhaps a gesture towards Simone de Beauvoir’s famous opening line, “One is not born, but rather becomes, woman”. That is, a category – a social construct. 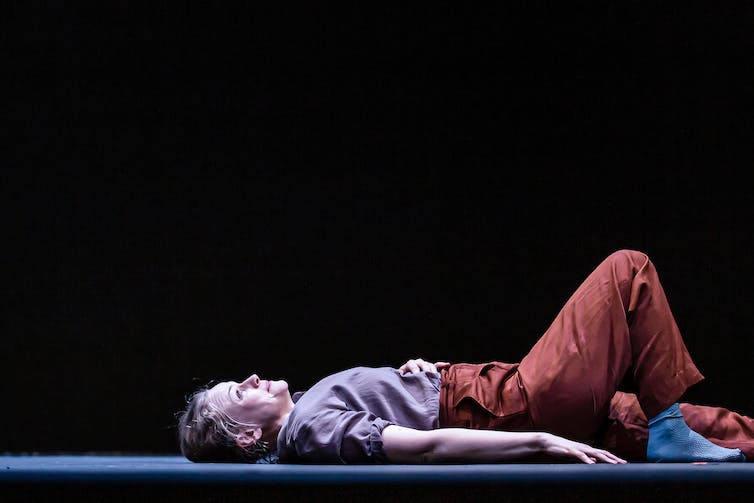 Peake’s character – called Woman – cannot make her dream of a baby real and cannot give it up either. The Other Richard

So too, Woman calls her longed for baby a “childling”. Not just because the baby has no reality, except in her own mind, but also because her baby seems to be half magical – a creature made of longing and yearning.

There is something deeply wrong lurking beneath the surface of the action in Avalanche. It’s not the just the money grasping doctors who trade in hope and prey upon an ageing woman’s despair (though entrepreneurial medicine is very much a focus of the play’s critique). Or the callous or sensible and loving male partners, or the supportive sisters or uncomprehending mothers. It’s also us – the audience – who are looking at this picture in an uncomfortable way.

But there is still an extraordinary stigma – seldom spoken about, seldom discussed – that attaches itself to a woman who wants to be a mother but can’t.

There is a peculiar kind of scorn that is heaped upon a “failed” mother. It’s a sting that Peake’s character undoubtedly feels, and that drives more of the action than the character would like. And, of course, men are rarely questioned about their lifestyle choices in quite the same way.

Childlessness is experienced by Peake’s Woman in a deeply, profoundly personal way – as grief, and loss. She attempts grief counselling at the beginning of the play, but cannot explain that the “someone” for whom she’s grieving has no existence in reality. So she tells the group she’s lost her mother.

But this problem has a social and cultural dimension. In cinemas and on television, in books and on the internet, being a mother is constantly evoked as a synonym for being loved, for being happy, and for being accepted.

The “happy ever after” of motherhood is offered as the plotline for every story but also posited as a “cure” for all the larger, existential worries that afflict us.

Every now and then a space opens within the play, in which the audience is invited to ask why does Woman yearn to be a mother so much? Her ex-husband believes she is too selfish. Her mother thinks she is too consumed with her work. Peake’s character says the thought of the child gives her a “reason for being”.

Her performance is driven on by detailed descriptions of invasive medical procedures. The fluorescent lighting. The disposable gowns. The trolley tables. The ultrasounds. The serial injections – every night at ten o’clock. The costs of treatment, $11,000, $2,800, $265. And the demand for evidence.

The doctors assure Woman that the chances of conception are 40%. But the statistics are deceptive. By the end of the play, she finds out that the chances for women as a group may be 40%, but for a woman of her age – at this clinic – the reality is less than 3%. 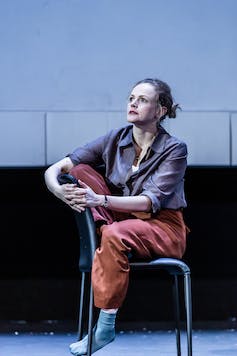 Peake’s character is never innocent. Neither agent, nor a victim. The Other Richard.

The character in this play is compelling because she is never innocent. Neither agent, nor a victim. There is a strong sense of knowingness – and a tremendous bitterness that is almost painful to watch.

Is she the beneficiary of decades of scientific innovation or is she the unwitting victim of a kind of predatory, medico-corporate greed? One of the doctors drives a Bentley, which Woman notices in the car park.

Suicidal thoughts aren’t far away. At one moment the character stands on a cliff top – distracted, on a precipice – only to be called back to reality by a passing jogger. (One UK study found that 42% of women undergoing fertility treatment experienced suicidal feelings as a result of their fertility problems.)

At the beginning of the play, Woman’s world is small, shrunken, tightly enclosed in the white space of the clinic. As her thoughts fracture, the stage walls lift to reveal the eerie landscape of a life beyond – ashen snow, a cold, dark aftermath, but endowed with a redemptive, even magical quality. The landscape glows, darkly.

There’s a sense, at the very end, that this character has found a different way to love and belong and feel accepted. A different path, as the character says, from “I” to “We”.

Avalanche: A Love Story, is at the Sydney Theatre Company until September 14.