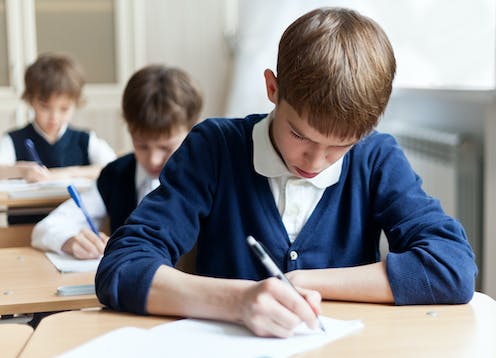 The preliminary 2019 NAPLAN results released this week show a small “upturn” in performance on the writing task.

For each year level, the percentage of students at or above the national minimum standard increased slightly between the 2018 and 2019 NAPLAN writing task.

But once you scratch beneath the surface, you see a more important and concerning story is unfolding.

Read more: Better pay and more challenge: here's how to get our top students to become teachers

In 2019, nearly 97% of Year 3 students across Australia met or exceeded the national minimum standard, whereas this figure drops to 82.9% for Year 9 students.

Of course, the 2019 Year 3 and Year 9 student cohorts are entirely different and there is little meaningful comparison to be made between them. But the 2019 Year 9 cohort were the 2013 Year 3 cohort.

When these Year 9 students were in Year 3 in 2013, 95% met or exceeded the national minimum standard. That means 12% fewer students are meeting the benchmark by the time they get to Year 9.

The NAPLAN website explains that the national minimum standards are “a snapshot of typical achievement” and warns that students who do not achieve them “are at risk of being unable to progress satisfactorily at school”.

This raises the question of what happens between Year 3 and Year 9. Why do we see such a drastic reduction in the proportion of students meeting the national minimum standard for the writing task?

It’s not about the basics

One thing is clear. The problem is not about the basics of reading and writing, because these skills are taught and assessed during primary school. As such, the high proportion of students in Year 3 who meet the grade is unsurprising.

The problem is one of progress, as a substantial proportion of students get stuck during their schooling. Additionally, the pressure to perform is much higher for Year 9 students because the bar is raised for this group.

By the time they reach Year 9, high school students are expected to be analytical, critical and creative in their writing. The 2019 NAPLAN writing task required students to construct a cohesive written argument that was engaging and persuasive, including the use of a range of persuasive devices.

Much of our education debate is given to arguing whether phonics or balanced literacy is best for teaching children how to read. There is no doubt that the basics in literacy are important building blocks for reading and writing. But we need to do more to support the development of comprehension and composition skills in upper primary school and the early years of high school.

Drilling into the data

We have to wait for the full national report to be released to be able to disaggregate the 2019 data. But the full data from 2018 and earlier years can easily be accessed online and there are clear and persistent trends that emerge.

First is the persistent downward trend in the percentage of students meeting the minimum standard from Year 3 to Year 9. This has occurred since the implementation of NAPLAN.

Second is the slowdown in growth between Years 7 and 9, which is also represented across all years.

So what is happening?

There is a well-known slump in performance in the middle years of high school, which has been attributed to factors including disengagement and absenteeism.

But much bigger factors are also at play.

Postcode and parents are largest indicators of success

It’s no secret that where students live and their backgrounds correlate to performance on standardised testing. This correlation appears to strengthen over the years. While performance in Year 3 has limited impact from socioeconomic factors, this becomes extremely pronounced by Year 9.

Similar results can be found in the NAPLAN reports when comparing results against parental income and employment. For example, in the 2016 NAPLAN writing task, 97.2% of Year 9 students whose parents were in professional occupations met or exceeded the standard, compared with 63.5% of students whose parents had been unemployed for at least 12 months.

The MySchool website uses a measure called the Index of Community Socio-Educational Advantage (ICSEA), which provides schools with a relative score based on factors including parental education and employment, geolocation and indigeneity.

The 2017 ICSEA Technical Report says 80% of the variance between schools’ performance on NAPLAN is due to factors outside the school. In other words, your postcode and parents have much more of an impact on your NAPLAN success than your school and teachers.

What can teachers do?

Although most factors influencing students’ performance on NAPLAN occur outside the school gates, there is much that teachers can do.

Read more: How to make good arguments at school (and everywhere else)

Teachers can develop a curriculum that engages students in critical and creative thinking, and encourages their language comprehension and composition skills as they progress through school.

The emphasis on the basics is not enough. We need an emphasis on sophistication of language and providing students with multiple opportunities to compose and comprehend literary and non-fiction texts in the classroom on a daily basis.

While this is a core part of high school English curriculum in the country, it must go beyond the English class and become embedded in school-wide practices that engage young people in rich language, literature and literacy experiences.