In February, about 600,000 cattle were killed by catastrophic flooding across north Queensland’s Carpentaria Gulf plains.

The flood waters rose suddenly, forming a wall of water up to 70km wide. Record depths were reached along 500km of the Flinders River, submerging 25,000 square kilometres of country. Cattle were stranded. Many drowned.

Read more: Queensland's floods are so huge the only way to track them is from space

Even though cattleman Harry Batt lost 70% of his herd, he was more concerned about the wildlife. He said, “all the kangaroos, and bloody little marsupial mice and birds, they couldn’t handle it”.

Harry was right to be concerned. As our research, published today in Austral Ecology, reveals, floods sweeping Australia’s plains have disrupted native species for millions of years. Now, as climate change drives more intense flooding, we will see this effect intensify.

February’s flood came ten years to the day after a far bigger flood on the adjoining river systems that submerged an area larger than Ireland. It was this flood that first drew our attention to the plight of native species.

Noel was asked by Northern Gulf Resource Management Group to survey wildlife in areas affected by the 2009 flood. Over the following four years, he found almost no ground-dwelling reptiles, despite them occurring elsewhere in the region. They appeared to have been washed away or drowned.

Biologists have long known that many species’ ranges are interrupted by the Gulf Plains. Hence, these floodplains are considered one of Australia’s most important biogeographic barriers: the Carpentarian Gap.

Many closely related species with a common ancestor are separated by this Gap, including the Golden-shouldered Parrot of Cape York Peninsula and the Hooded Parrot of the Northern Territory. They are thought to have separated around 7 million years ago.

Read more: South-East Queensland is droughtier and floodier than we thought

The Gap also separates many other species, including birds, mammals, reptiles and butterflies, at the subspecies or genetic level. Even more species found on either side are just absent from the Gulf Plains. 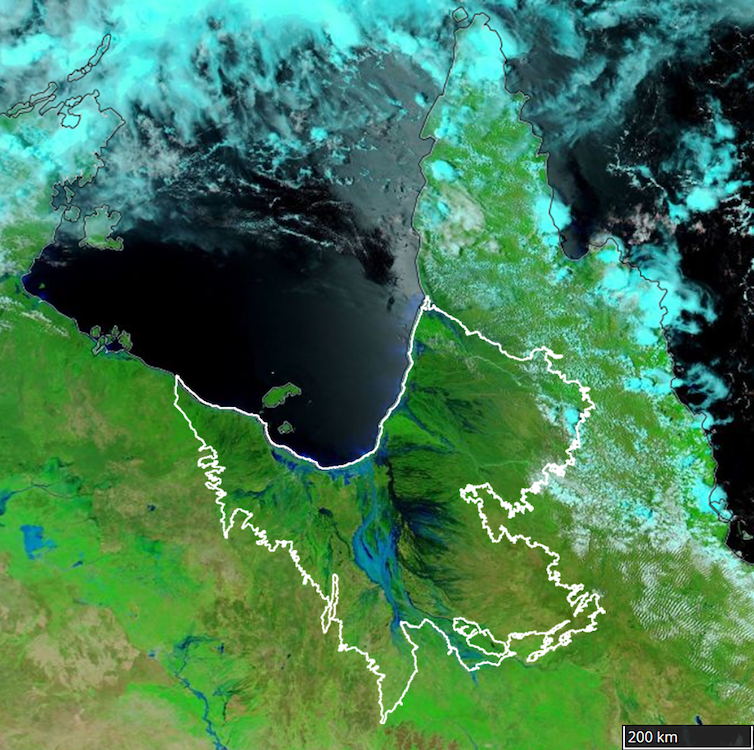 Huge flooding across the Gulf Plains, including the Norman and Flinders Rivers, in February 2009. NASA Worldview, CC BY-SA

Flood impacts are immense and under-appreciated

When biologists first tried to find a reason for these patterns, they only considered aridity. They proposed Australia’s arid zone expanded to the Gulf of Carpentaria during ice ages.

There is no evidence for this, but the misunderstanding is completely understandable.

Any dry-season visitor to the Gulf Plains will find a dry, inhospitable environment with few trees or shrubs for shade, cracked clay soils, and lots of flies. European explorers described the region as “God-forsaken”.

But it can be quite a different place in the wet season.

Rains in the Gulf are caused by the summer monsoonal troughs or cyclones. About once a decade, these generate massive downpours. Historical records show at least 14 major floods since 1870.

So, to us, it seemed floods rather than aridity could be the cause of the odd distributions of plants and animals. 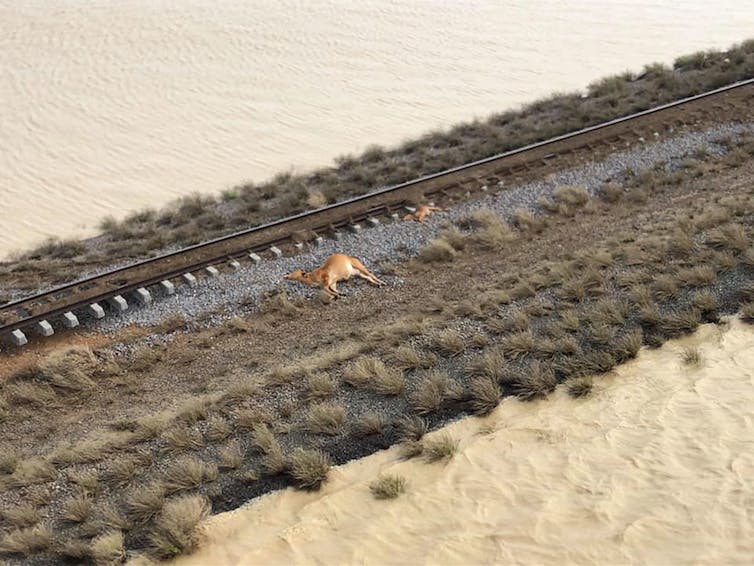 Tens of thousands of cattle died in recent Queensland floods, along with uncountable number of native animals. AAP Image/Supplied by Rae Stretton

We set out to see whether Noel’s findings could have been caused by flooding or whether other factors such as soil, vegetation or climate were more important.

We also wanted to know what other effects floods might have on the region’s ecosystem. Could floods, by eliminating trees and shrubs, be responsible for the hostile appearance of the region? Could ground-dwelling reptiles and birds be underrepresented, not just at Noel’s sites, but on floodplains across the area?

To find out, we divided the area into floodplains and higher-altitude land, and generated 10,000 random sites across the Gulf Plains. We extracted soil, vegetation and rainfall data from national information sources, and examined the patterns.

We found trees and shrubs were significantly less common on floodplains than on land above the flood zone, regardless of soil or rainfall, and tree cover was further reduced on cracking clays. We concluded the plain’s open, hostile appearance is caused by a combination of soils and flooding.

We then examined all gecko, skink and bird records from the Atlas of Living Australia.

We found ground-living reptiles and birds were much less common on the floodplains, regardless of vegetation or soil. As expected, reptiles were more sensitive to flooding than birds, which can fly to safety during floods.

Finally, we found the sites affected by the 2009 flood had significantly fewer geckos and skinks than other sites across the Gulf Plains.

Increased flooding from climate change could have major consequences

Our findings have evolutionary significance that extends into the future. Repeated disruption of species across their distributions affects gene flow and ultimately produces new species. If floods become more frequent, as expected under climate change, so might the rates at which new species form.

They also have serious land management implications. Climate change planning emphasises conserving river corridors as safe refuges from arid conditions. However, periodic scouring of many of the nation’s floodplains – expected to increase under climate change – means that this approach needs rethinking.

We conclude that on the most arid occupied continent on Earth, unpredictable floods may cause the most disruption to the Australian plant and animal life.