This morning an Extinction Rebellion protester was arrested after hanging from a rope over the William Jolly Bridge in Brisbane, blocking all lanes to peak hour traffic.

And earlier this month in Brisbane, more than 70 climate change protesters were charged with offences that included contravening direction, obstructing traffic and obstructing police.

But where do politically motivated crimes sit on the spectrum of culpability?

Motive is generally irrelevant to criminal law. While there are some offences (such as terrorist offences) that require a specific reason to underpin the criminal act, these are rare. Most of the time, it’s enough to prove the offender intentionally, recklessly or negligently committed the criminal acts. 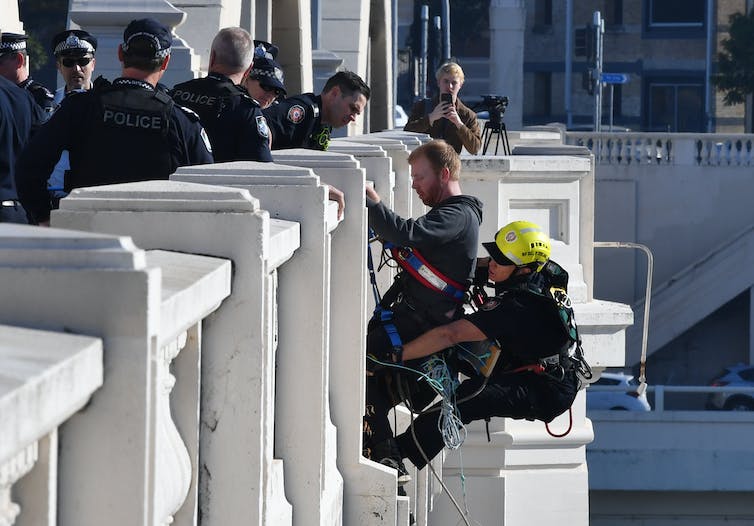 On the other hand, motive is central to sentencing law. Contract killers and mercy killers, for instance, may both be convicted of murder, but contract killers will be sentenced more harshly. They will be considered more blameworthy because of their financial motivations, in greater need of deterrence, and a bigger risk to the community.

Read more: Why does the US sentence people to hundreds of years in prison?

Unfortunately, the courts have provided little guidance on whether politically-motivated crimes – such as Extinction Rebellion blockades or “Egg Boy” Will Connolly’s egging of far-right politician Fraser Anning – are better or worse than crimes committed for motives like jealousy or vengeance.

Two distinct approaches can be found in past recorded cases where judges have sentenced politically motivated offenders.

In some cases, judges have taken a sympathetic approach, displaying a level of respect for the offenders’ principled behaviour.

While it’s acknowledged they have broken the law and deserve punishment, their actions are not considered as wrongful as the actions of people who break the law for less altruistic reasons. So, judges have reasoned they should be punished more lightly.

An example of this approach can be found in the Pine Gap peace pilgrims case from 2017, when six religious activists breached the perimeter of the Pine Gap military base. 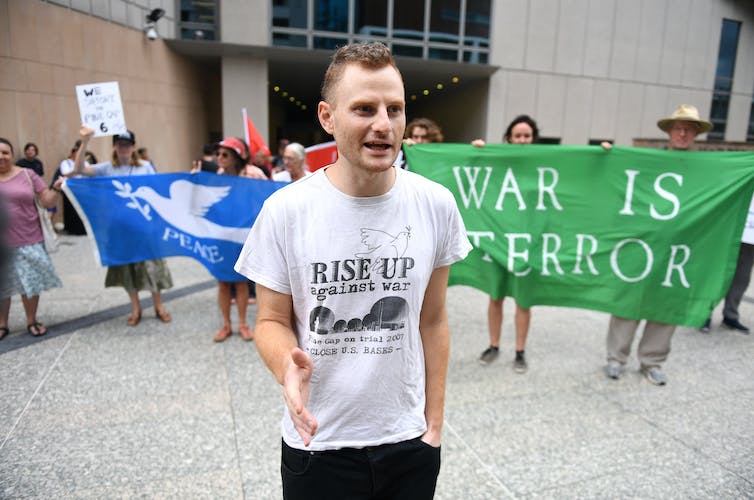 Six peace activists were found guilty of trespassing onto a defence facility near Alice Springs, but they were punished relatively lightly. Dan Peled/AAP

In sentencing the offenders, Justice Reeves was influenced by the fact they were “conscientious protestors”. He described their offending as being at “the lowest end of the scale”.

And rather than imprisoning them, as requested by the prosecution, he imposed fines ranging from A$1250 to A$5000.

In other cases, judges have taken a far less sympathetic approach. They’ve viewed politically motivated offenders as self-serving individuals who deliberately intend to undermine legitimate laws in pursuit of their own idea of justice.

Not only does this make them more culpable, it also makes them more dangerous and harmful to the community than “common criminals”, the reasoning goes. As a result, they should be punished more harshly.

This approach can be seen in the sentencing of DJ Astro “Funknukl” Labe, who was convicted of headbutting Tony Abbott.

While Labe only caused minor physical harm, Magistrate Daly considered the offence to be of “considerable seriousness”.

He said the sentence needed to make it clear to those with similar impulses that indulging those impulses would attract a deterrent sentence. He sentenced Labe to six months’ imprisonment.

These cases reveal four key factors that appear to influence a judge’s approach.

The most significant factor is the gravity of the offence. Cases that inspire a sympathetic approach from the judge usually involve relatively minor offences, such as spitting or trespassing.

A less sympathetic approach has generally been taken when more serious offences have been committed, such as those that pose a threat to life.

The second relevant factor is the use or threat of violence. Judges seem prepared to take a sympathetic approach to serious crimes committed for political reasons, so long as no violence is involved. But this willingness vanishes when offenders use or threaten violence in pursuit of their goals. 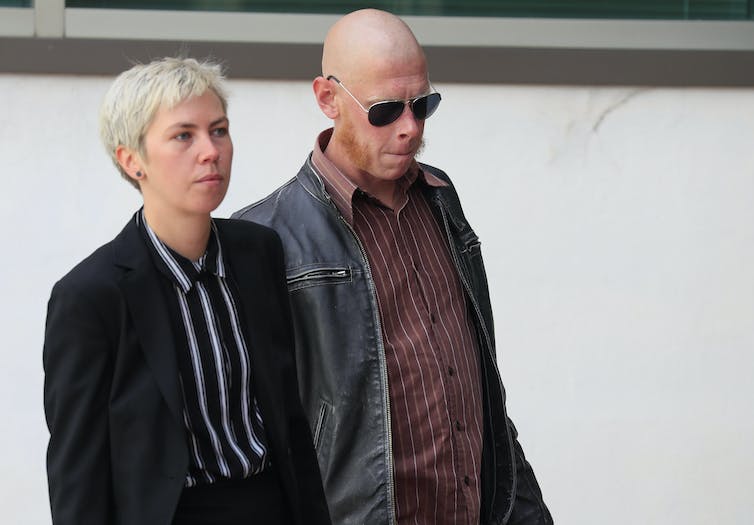 The third is the target of the offender’s actions. Judges have shown little sympathy for offences that have directly targeted parliament, politicians or the courts. These institutions are considered fundamental to our system of government, and are deserving of “the most serious protection”.

Offenders who target premises that are not directly related to the object of the protest may also be seen to be “looking for trouble”, rather than being engaged in genuine protest.

And the fourth relevant factor is the perceived sincerity of the offender’s beliefs. A sympathetic approach is more likely when it’s clear the offenders hold their beliefs sincerely, strongly and were motivated by genuine and deep concerns.

While there is some indication that the purpose of the offender’s protest may also be relevant, there is no clear pattern in this regard.

This is probably due to a judicial reluctance to explicitly express support or disapproval for a particular political cause, given the importance of judicial objectivity.